September will see a milestone for both the city of Desert Hot Springs and the medical marijuana industry: the opening of the city's first marijuana cultivation facility.

Canndescent, billed as a premium cannabis cultivator, is set to open a 9,600-square-foot grow facility Thursday and will open more facilities over the next two years, eventually totaling over 100,000 square feet of growing space for the company.

CEO Adrian Sedlin admits it is a rapid expansion, but said Canndescent has spent the past year raising funds -they just announced a $6.5 million seed round - and building itself up. He added the city had been a great partner in the project.

"I've developed other projects in other places, and I've never seen a city more committed to a company's success and an industry's success," he said. "I'm thrilled with how the city has supported and tried to move our project along."

With lower property costs and taxes than neighboring cities, Desert Hot Springs has become a lucrative center for the medical cannabis industry and has worked hard to enhance their reputations to prospective growers.

"There certainly was an incentive" to set up shop in Desert Hot Springs, Sedlin said. "They were the first city to legalize cultivation in all of California. They created a home for the industry there."

Operations will get underway this week, with a grand opening ceremony planned for Sept. 29 and the first harvest expected in November, Sedlin said.

Many conditional use permits have been issued by the City Council - two more were approved at the last meeting, leading Council member Joe McKee to jokingly ask Community Development Director Nathan Bouvet, "how many of these have we done?"

However, despite the many other cultivators issued permits by the city, Canndescent has thus far been the only one to get its operations up and running.

Jason Elsasser, Desert Hot Spring Cannabis Alliance Network president, spoke highly of Sedlin, who sits on the organization's board, and his capabilities.

"He's definitely an inspiration to us all," Elsasser said. "He's a very good guy and is very well liked by everyone in the area and the industry."

A self-described "early stage CEO," Sedlin has been working on getting enterprises off the ground since he was 20. Now in his mid-40s, he said those experiences helped enormously in getting Canndescent ready to grow, so to speak. The company started to come together when his brother-in-law called him for business help.

"He called me about a year and a half ago and said 'Would you buy me a building?'" Sedlin said. "And I said 'For what?' And let's just say, a couple months later, that turned into a business plan."

That business plan has led to the opening of the first of multiple grow facilities, which will produce "premium" cannabis. Sedlin explained Canndescent's facility will be state-of-the art, with a 43-step curing process, a longer procedure than many other growers.

"Everything we do, every choice we make is geared towards better user experience," he said, explaining the company's methods for creating and naming different strains. "One shouldn't have to have a periodic table to select a product."

He said users - also known as patients, unless recreational marijuana is legalized in November - simply need to think about how they want to feel, and then select the corresponding strain: calm, create, connect, charge or cruise.

A recent California Counts poll shows broad support for Proposition 64, with 80 percent of Democrats and 53 percent of Republicans saying they would vote for the initiative. Sedlin said he and his business partners support legalizing recreational marijuana, saying it has healing powers and is safer than alcohol, but despite the outcome of the ballot measure, Canndescent is looking at a bright future.

If it doesn't pass, Canndescent can continue to operate in a marketplace where margins are higher. If it does pass, demand will skyrocket and, "it'll be grow, grow, grow," Sedlin said.

At its roots, Canndescent is about personal excellence, he said.

"It's not about altering yourself, but connecting with your best self." 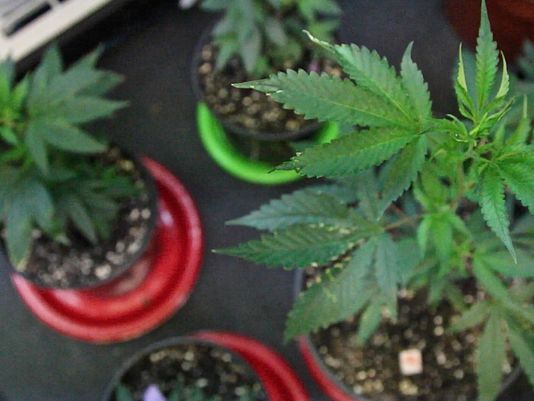