As summer draws to an end and the clock ticks toward a new year, cities across California are hustling to outline regulations on marijuana as the state is expected to start issuing commercial licenses in 2018.

Across San Mateo County, the coastside is becoming one of the more welcoming regions to commercial operations with marijuana cultivation rising to the top of possibilities.

In Half Moon Bay, voters overwhelmingly approved legalizing marijuana during the Proposition 64 election last year, and the city is now moving to legalize indoor pot growing. In the coming weeks, the city is looking to gauge the community's temperament on commercial operations such as cultivation and potentially sales inside greenhouses in the coastal town.

"We think it could be well regulated and contained, it could be good business for the city," said Mayor Debbie Ruddock. "We're hopeful we can do it in a way that helps the city economically, while protecting the public from the social impacts and the environmental impacts. These operations are not without environmental impacts, so we have to pay heed to this too. Staff is working hard to address these issues."

The city could become one of the first in San Mateo County to approve agricultural businesses as state officials aim to draft a licensing system next year to meet requirements outlined by the landmark law legalizing recreational marijuana for adults.

Half Moon Bay has spent months considering what type of commercial operations to allow and opted to focus on cultivation in a city with deep agricultural roots. As greenhouse operations face steep international competition in the cut flower industry, many hope marijuana cultivation could have the power to revive dwindling agricultural operations.

City officials have heard from a range of industry representatives and farmers about the potential economic boon the green rush could provide. But the general public hasn't been as involved while the city's focus was initially solely on agriculture.

But in mid-August, the City Council agreed to consider also allowing sales at certain greenhouse grow sites and is again asking residents to weigh in at a Sept. 13 community meeting

"We just haven't heard from many people. We've heard from the business community, but we've had a dearth of responses from just citizens generally," Ruddock said.

After hearing from the public, the council is expected to review a draft ordinance Sept. 19 that will factor in considerations such as safety requirements, how to reduce light pollution, environmental regulations and more, said Deputy City Manager Matthew Chidester.

While the city is considering allowing sales, right now officials are talking about limiting it to greenhouses where marijuana is grown. When asked about the prospect of a pot shop popping up somewhere in Half Moon Bay's quaint downtown, Ruddock said there hasn't been consensus on whether that's a wise move.

"I don't think there's the appetite to go there, at least now. It just introduces a whole other set of problems," she said.

But the coastside has been much more receptive to welcoming marijuana-related businesses than other communities on the Peninsula. While Pacifica has medical dispensaries and cultivation is considered on agricultural lands, others have outright banned all commercial operations and limited personal growing to indoors. San Mateo took an even stricter step by citing Proposition 64 as enabling the city to prohibit medical marijuana from being smoked in multi-family housing. While an average 63 percent of voters across San Mateo County approved the law, Half Moon Bay residents boasted a 69 percent approval rating.

There's about a million square feet of greenhouse space in only a handful of places within city limits, and some of those properties straddle the border of unincorporated San Mateo County. The Board of Supervisors has also indicated it is willing to consider allowing agricultural cultivation in coastal greenhouses in unincorporated parts of the county. That territory is much larger and surrounds Half Moon Bay, including much of the agricultural lands along State Route 92 as well as the farming town of Pescadero. County staff is currently working on drafting an ordinance for greenhouse cultivation that's expected to be presented to the board in the near future.

Chidester said they've worked to align their policies, but noted the county is not considering sales.

"I think for the most part when you're talking about cultivation and testing, the strictly agricultural pieces, I think there will be a lot of similarities between what we do and what the county does," Chidester said. "It's the retail piece that takes us in a different direction."

Unlike what's been considered by county supervisors to date, Half Moon Bay also seems poised to propose taxing commercial operations. On top of state taxes, cities are able to implement their own locally-controlled taxes with voter approval. Ruddock said if the city proceeds, the soonest it might be able to put something on a ballot would be June 2018. While the council hasn't officially weighed in, she said she'll be looking to strike a balance between using commercial marijuana as an economic opportunity for the city while at the same time not overtaxing in a way that encourages black market activity.

But as the framework for businesses must await action at the state level, Chidester and Ruddock noted Half Moon Bay's regulations may evolve.

"Any ordinance we adopt right now around commercial cannabis will likely have to be revised down the road once there's more clarity from the state on what their regulations are going to be," Chidester said. "We expect to be dealing with this issue ... for some time." 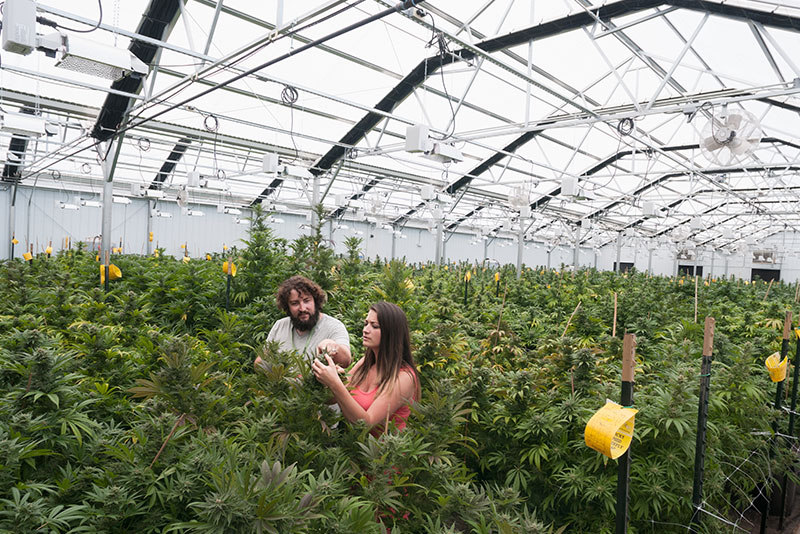