CA: Here's Where To Buy Legal Pot In The Valley After Jan. 1 - And How It Will Work

For the first time in more than 100 years, it will be legal in California to buy marijuana for recreational use. But that doesn't mean it will be easy to find — especially if you live in the central San Joaquin Valley.

State licenses for recreational sales will kick in on New Year's Day. Legal pot shops are expected open their doors on that day in a few cities, such as San Diego and Berkeley, but most California local governments are still either wrestling with their consciences on marijuana or working to get their rules in order.

Many Valley cities have moved to ban recreational sales, including Fresno and Clovis, but two small towns each about an hour's drive from Fresno have approved dispensaries and made some progress in attracting them.

Coalinga, the first local city to approve allowing cannabis operations, is still looking for suitors to open its first dispensary.

But Woodlake — a town of less than 8,000 people about 15 miles northeast of Visalia in Tulare County — has pushed forward at breakneck speed, going from idea to ordinance to the approval of two companies' dispensary proposals in less than six months. City leaders hope to unlock a treasure trove of tax revenue, which can be used to beef up a thinning public service budget, and attract customers to a blip on the map found well off the beaten path.

Michael Dunaway is the president and founder of Green Bean Pharm, one of the two companies looking to move into Woodlake. Green Bean has operated as a medical cannabis delivery service in Tulare County since 2013. Dunaway and his partners bought the shuttered former home of High Sierra Lumber & Supply on Naranjo Boulevard, the city's main east-west street,, and are in the middle of a massive remodeling project. They plan to turn one section of the lot into a marijuana storefront, then work to attract other cannabis-related tenants to form a sort-of pot business park.

"This area, the Valley, is conservative and shy in terms of cannabis," Dunaway said. "And for years, people only had access to low-quality, black-market cannabis that is well below state standards. We're working to educate people on cannabis and raise the bar in Tulare County."

But to do that, Dunaway's company, which he said delivered to 1,300 to 1,500 customers in the last year, still has to clear a few obstacles.

Local approval is required to advance through the state's cannabis licensing procedures. Woodlake gave it at the end of November, leaving Dunaway precious little time to get his state paperwork in order. Turning a lumber yard into a pot shop is also no easy task, especially given the various state and local safety requirements — surveillance cameras, controlled access, secure display cases, and so on. The city of Woodlake also has the right to deny final approval if any of these or other guidelines (for example, employee background checks and fee payments) aren't met.

It's no surprise, then, that Green Bean won't be ready on Jan. 1. Dunaway hopes to open by the end of February.

Although his location is still under construction, Dunaway has a pretty good feel for how what will be the central San Joaquin Valley's first recreational dispensary will work.

Customers will be required to show identification to a receptionist to enter the building. Once inside, the receptionist will ask customers exactly what they're looking for.

Green Bean will offer novice buyers a consultation with a "senior budtender," who will ask about what sort of effects the customer is looking for and offer recommendations. The employee will explain the differences between Indica vs. sativa or tinctures vs. extracts, and can answer various other pot-related questions.

Seasoned cannabis consumers are welcome to skip this consultation and wait in the lobby for their turn to enter the sales area.

Customers will be escorted at all times while in the sales area. State law prohibits prospective buyers from touching the cannabis inside the shop, but Dunaway said they will be allowed to smell it and inspect it closely. All purchases will be sealed in the opaque, state-mandated packaging that will also display a receipt and tracking information.

Buyers will then leave through a separate exit, as security provisions require that no one enters and exits through the same door.

"We're looking to maximize security with limited invasion," Dunaway said. "We didn't want it to feel like a prison. We wanted an open, welcoming space — something a soccer mom would be comfortable going inside."

Dunaway hopes his dispensary will attract a new clientele: Those curious about marijuana who have been scared away by criminality or the plant's dubious black market sales structure. These are baby boomers who may have tried pot a few times in high school, retirees who find themselves flush with cash and free time or college students who've recently turned 21 — the minimum age for cannabis use in California.

Price is a difficult thing to nail down, Dunaway said. He currently pays California business taxes, but legalization has brought a slew of fees and taxes that are still in flux.

He currently sells an ounce of top-shelf marijuana for $300. About $20 of that covers his delivery costs, so that ounce would sell in his store for $280.

However, Green Bean will have to account for a mandatory 15 percent state excise tax on all product he buys wholesale. This means that for every $1,000 he spends buying cannabis, he will have to immediately pay $150 to the state. State law bans businesses from holding a cultivation and dispensary license in most scenarios, so Dunaway will have to purchase his product.

Recreational store sales will also be subject to state sales tax of around 8 percent, as well as any local sales tax. Woodlake plans to impose a sales tax of up to 10 percent. Medical cannabis patients can exempt themselves from paying sales tax if they register with the state.

The business will also be required to pay thousands in fees and to cover a special marijuana property tax many cities, including Coalinga and Woodlake, have adopted.

Market factors may also play a role. Dunaway is well aware that Green Bean will be among the only companies legally selling recreational weed within a 200-mile radius, which may allow him to increase prices and profits. Legal cultivators will likely do the same, as the demand for marijuana will likely outstrip the supply until the legal cannabis industry expands. When Nevada legalized earlier this year, for example, the state's 47 dispensaries quickly depleted the legal cannabis supply. It remains illegal in both state and federal jurisdictions to transfer marijuana across state lines.

These factors will all tie into Dunaway's final price — meaning that $300 high-quality ounce could sell for $400 or more in February.

This is not unique to Green Bean or Woodlake. Fitch Ratings predicted that cannabis companies in the not-always-business-friendly Golden State could face taxation rates of up to 45 percent, and an Associated Press report found that pot prices could rise as much as 70 percent when going from black market to legal purchases.

The new state rules also prohibit dispensaries from giving away free cannabis — a tactic used frequently by pot companies to maintain customer loyalty. It's typical for medical delivery services to offer pre-rolled joints or a pot brownie as a sweetener for any purchase over a certain amount.

This hurts quite a bit, Dunaway said, as it is yet another leg up for his black-market competitors. Like many current cannabis operators, Green Bean routinely sends a representative to Sacramento to follow changes in the law and, on occasion, ask for certain rules, such as this one, to be relaxed.

Dunaway is determined to make the best of it, though, saying he's currently exploring promotional giveaways of non-cannabis items — shirts, hats, lighters — as a way to keep people coming back.

Some sort of cannabis-related business seems likely to spread to Mendota and Firebaugh. Like Coalinga, these westside towns have an agricultural background and face significant economic hurdles due to their high poverty rate. Whether these cities will allow dispensaries — which have tended to scare local municipalities due to the perceived risk of crime and the idea of money and marijuana actually changing hands — remains to be seen.

Hanford is moving forward with various commercial cannabis growing projects, but its city government has taken a hard line against dispensaries.

And then there's Fresno.

Of California's five largest cities, Fresno is the only one to have installed a clear ban on recreational cannabis sales. The city's voters narrowly approved Proposition 64, which legalized recreational sales and use for adults 21 and over. After several months of contentious debate, the Fresno City Council passed the ban with a 4-3 vote in August. Residents can still grow their own marijuana under Proposition 64, however, which supersedes city ordinances.

On Dec. 14, however, the city council voted to begin an overhaul on the August ban and allow businesses to begin applying for state license while Fresno works out its final rules. The city will also begin issuing letters to medical cannabis businesses.

This back-and-forth will likely take months to shake out, as arguments between council members have spilled onto social media and carried on for the better part of a year. And several council seats will change hands in November, which could prompt the council to again revisit the contentious issue.

At this point, Fresno residents should plan for a one-hour road trip to buy legal weed. 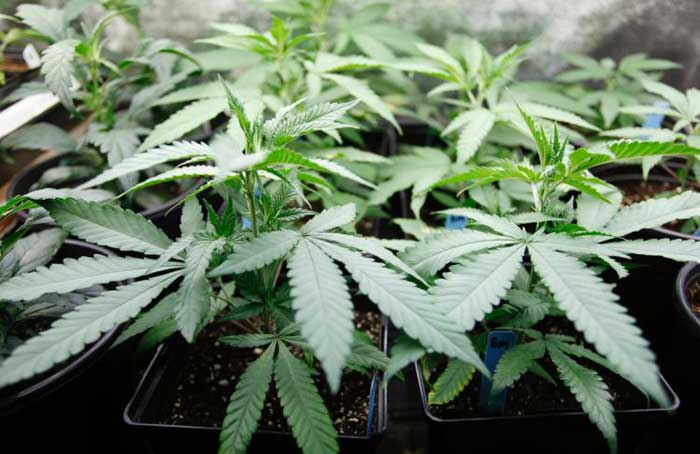 CA: With Millions Of Dollars And Child Safety At Stake, Another City Considers Pot

CA: Hanford Allows Cannabis Cultivation, But Where Can You Buy Recreational Pot Jan 1