Two California businesses – one a beloved national brand and the other an upstart in the state's hottest sector – have teamed up for new product releases in two of the North Coast's top industries: beer and cannabis.

Lagunitas Brewing Co. last week released its SuperCritical Ale, a hoppy beer that is brewed with terpenes, aromatic compounds of essential oils that are extracted from some plants, including cannabis and hops. The brew, available only in select California locations for a limited time, contains no THC, the chemical that triggers psychoactive effects.

Lagunitas, based in Chicago and Petaluma, Calif., received the terpenes from Santa Rosa-based CannaCraft Inc., a cannabis-extract manufacturing facility that has made a name for itself in the newly legalized industry despite being raided by police last year.

In exchange, Lagunitas assisted CannaCraft in developing new vaping products for its AbsoluteXtracts line, which do contain THC. CannaCraft included terpenes that were derived from hops in the new products, with Lagunitas brewers providing guidance on obtaining a beer-like aroma for the high-inducing weed.

It should be available for sale in about five weeks, said Dennis Hunter, CannaCraft founder.

The collaboration is the latest example of businesses outside the cannabis sector exploring ways to take advantage of interest in marijuana, which becomes legal for recreational use Jan. 1.

According to estimates, California's annual cannabis crop is worth $7 billion, making it the state's most valuable agricultural crop.

A Santa Rosa symposium was held this month to explore opportunities for the wine industry to partner with cannabis producers. There, one brand – Legion of Bloom – introduced a sparkling wine infused with terpenes from a cannabis strain cultivated in the Russian River Valley. That product also did not contain THC.

Breweries and wineries have to walk a fine line, as cannabis is still illegal under federal law. Those businesses do not want to risk losing their federal license by selling marijuana on site or infusing a cannabis extract with THC in their product.

Still, the collaboration is a sign of businesses looking to capitalize on new interest in the cannabis industry, Hunter said: "I think it's going to open the door for partnerships and more business looking to our industry as a legal industry."

Lagunitas may have been a natural partner; it has had a stoner-friendly vibe since its founding in 1993. Its Undercover Investigation Shut-Down Ale commemorates a 2005 St. Patrick's Day raid by state Alcohol Beverage Control agents to arrest employees smoking pot at the Petaluma plant.

As beer drinkers want to explore the newest versions of hoppy India Pale Ales, Marshall said terpenes can play a valuable role in creating unique aromas and mouthfeels to a drink.

For SuperCritical, Marshall used terpenes from the Blue Dream and Girl Scout Cookie cannabis strains, which were combined with seven different hop strains. The beer registers 6.6% alcohol by volume, rather low for Lagunitas.

"I think it will be no different than other mainstays in my spice rack I can use," Marshall said of terpenes.

Hunter said terpenes are an emerging cannabis category that is likely to grow in terms of marketplace acceptance. They could work especially well as an aroma and flavor enhancement for food, he said.

"A few years ago ... it was hardly talked about," Hunter said of terpenes. "It's the buzzword everywhere now." 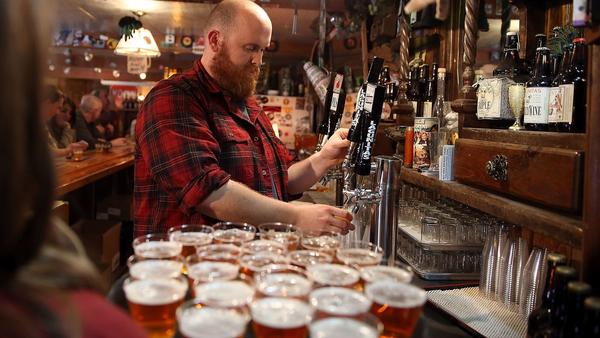