A trade show and expo for all things marijuana will take place at the Shasta District Fairgrounds in Anderson in mid-July.

About 50 vendors have reserved booths for the event, which is open to anyone at least 21 years old as well as those 18 and older with medicinal marijuana recommendations, she said. A series of speakers is still being finalized to cover a range of topics from growing marijuana to what the law allows, she said.

"It focuses on normalizing marijuana, celebrating the fact that it's legal (and) how to use it in a professional and ethical manner," she said.

Proposition 64 in November legalized recreational marijuana possession and use in private for all adults. But don't expect to toke up at the event – any use of marijuana or cannabis products is strictly prohibited.

"We're a non-consumption event," Forkash said, adding that vendors won't be selling any marijuana products, plants or seeds at the event.

"Because it's a non-consumption event, the focus is really on education, learning and exploring what's new rather than just going and getting high," Forkash said.

Smoking areas are available for tobacco but leave the weed at home, said Kirby Spencer, CEO of the Shasta District Fair and Event Center.

The event will be held inside Lassen Hall, which costs about $700 to rent for a day, Spencer said. THC Fair will also be providing security, she said.

It's the first cannabis event to take place at the fairgrounds, she said. A previous one had been planned years ago but ended up backing out, Spencer said. She said she wasn't the director at the time and didn't know the specifics.

"These people have had shows throughout other fairgrounds," she said. "We did our due diligence and checked with other fairgrounds. ... With the proper security and proper rules in place, the event is extremely successful."

That helps make the environs more comfortable for those who want to learn more about marijuana – but not via secondhand smoke, Forkash said.

She said she didn't have immediate figures on how many tickets have already been ordered, but in the past the majority of attendees pay at the door.

Tickets cost $15 for a two-day pass, though military veterans will receive a $5 discount.

The fair has been traveling along the West Coast holding fairs in states with legal marijuana. After Redding, the next fair held near the North State will be in Ashland, where the fair is headquartered, Aug. 19 and 20. 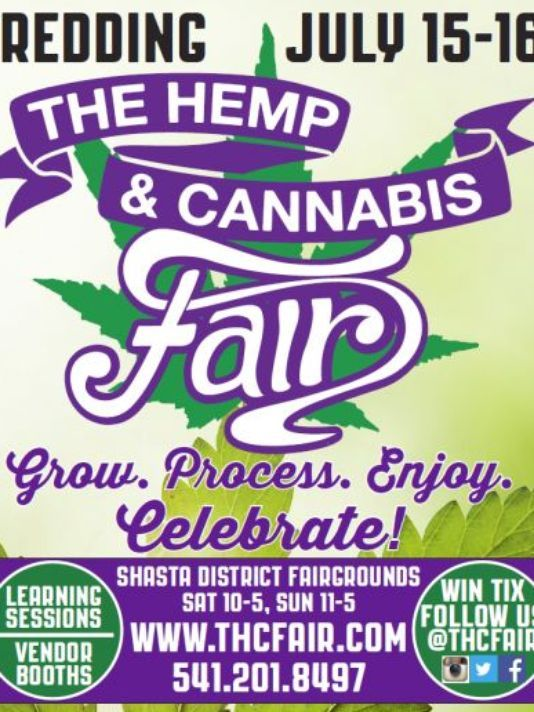