Urgency clashed with caution at a debate Thursday over the upcoming referendum to overhaul the regulatory regime governing the county's marijuana industry.

Sarah Bodnar, campaign manager for Measure AF, squared off with county Supervisor John McCowen in a spirited - and at one point testy - discussion at a public forum held at the Ukiah Civic Center, where elected leaders and citizens presented arguments for and against the ballot measures that await Mendocino County residents in November.

Bodnar argued on behalf of an industry that is eager to grow and "begging to be regulated" amidst legal uncertainty, to which McCowen countered with predictions of disruptive and unstoppable expansion.

The measure repeals stopgap county law governing the industry, introduces a more comprehensive set of regulations intended to better comply with statewide regulations enacted last year, and sanctions growing and selling countywide as a "principal permitted use." Bodnar argued that the initiative was urgently needed to encourage investment in the industry.

"We can't make money for this county until this industry has rules they can follow," said Bodnar, who called the marijuana industry "the most important economic engine for the future of this county."

With the county's current regulatory law, an "urgency ordinance," expiring in the middle of next year, prospective investors are stifled by uncertainty, she said.

"We have zero regulatory certainty around the cannabis industry right now, and until there are laws that every part of the industry can follow, from cultivation to processing, manufacturing, lab testing, distributing, and dispensing, we have prohibition," Bodnar said. "There are business owners and farmers who want to do business, and our current county code does not accommodate most of those activities."

McCowen disputed that view, blaming California for the regulatory confusion and affirming the county's commitment to legal clarity and compliance.

"This isn't about regulating marijuana," McCowen said. "It isn't about being pro- or anti-marijuana. It's about writing regulations that fairly balance the needs of medical patients, cultivators, the general community and the environment. On every score, Measure AF fails."

McCowen decried the measure's zoning rules, which would eliminate or reduce the minimum distances required between cannabis-related operations and neighboring residences, schools, churches and facilities.

The audience was treated to a dramatic interlude when McCowen and Bodnar disagreed over whether the Measure AF campaign had fulfilled its financial-reporting obligations. McCowen said that the Mendocino Heritage Initiative of 2016, a political action committee, had failed to disclose a $10,000 fee paid to a defense attorney named Omar Figueroa.

"That's because he didn't accept it," said Bodnar.

Measure AF contains a tax on cannabis-related businesses that competes with a separate initiative proposing its own tax. Measures AI and AJ, which must both be passed separately, would fund enforcement of marijuana regulations, mental health services, repair of country roads, and fire and medical services. 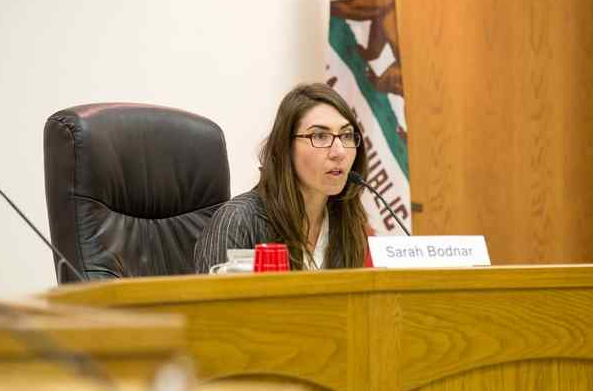 No on B, Yes on B Backers State Case