The tiny town of Nipton, Calif., owned by a company that legally grows and sells marijuana, wants cannabis fans to know they're welcome to come and party – provided they bring their own weed.

Nipton, a former mining town with a population of 20, sits in the far eastern part of San Bernardino County near the Nevada border, about 10 miles off the 15 Freeway.

The entire town was purchased in 2017 by American Green, a publicly traded company that cultivates and sells marijuana. Recreational marijuana became legal in California on Jan. 1.

"If you don't like cannabis, there's no reason for you to be here," said Mike Rosati, the company's marketing manager.

Why do partiers have to bring their own stash? Because it's still illegal to sell recreational marijuana in unincorporated San Bernardino County.

Rosati said Nipton will build on the "bud-and-breakfast" industry that has sprung up in Colorado since that state legalized recreational pot three years ago.

Rooms at the Hotel Nipton, where the bathrooms are down the hall, rent for $99 a night.

In the last few months, the five-room Hotel Nipton, once an escape for early Hollywood actors; the Whistlestop Cafe and the Nipton Trading Post have all been renovated.

Hotel rooms cost $99 per night. The hotel sits on 80 acres of land, which also includes eco-friendly tents and hookup sites for RVs.

The trading post remains a stopping point, with sodas and restrooms for motorists traveling from the 15 Freeway to Searchlight, Nev. It has a vending machine that one day may sell various marijuana products.

American Green has patented the machine, which determines whether a customer is 21 or older through the use of technology that scans a vein in a customer's finger.

Though the vending machine displays video images of people toking up, it won't be stocked unless a county ordinance is changed.

"No one has asked them to [change the law]," said David Wert, spokesman for the San Bernardino County Board of Supervisors. "Our planning people are always open to talking."

Though American Green plans to host a variety of pot-friendly weekend events, Rosati said the company has no immediate plans to push for a change in law.

He said Nipton is content with creating a welcoming destination where visitors can enjoy pot products they have purchased elsewhere.

Rosati said there is some confusion as to precisely where in Nipton people can legally light up a joint. Because of California's non-smoking laws, visitors won't be able to smoke pot in the restaurant, but it will be permitted in hotel rooms and outdoors behind the hotel.

According to a spokeswoman for the San Bernardino County Sheriff's Department, deputies will not harass marijuana enthusiasts who indulge in Nipton.

Where people partake is "up to the privately owned facility," said Cindy Bachman, a public information officer. 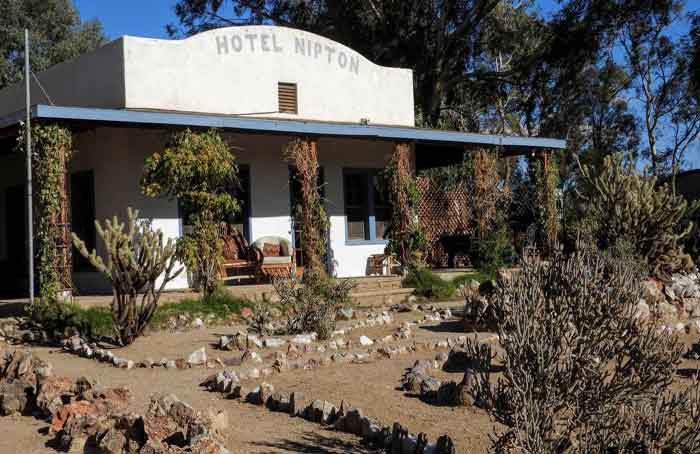