It's not just vines that grow in Napa, Sonoma, and Mendocino counties, and marijuana cultivators, like vintners and farmers, are reeling from the still-burning Tubbs and Atlas Peak Fires. According to the marijuana advocacy group the California Growers Association and industry leaders like Erich Pearson, co-founder of local dispensary SPARC, the growing industry is also one of the most precarious in the disaster, with farmers in legal limbo unable to recoup crop or fire insurance.

SPARC, Pearson's dispensary with two locations in SF, is the largest licensed operator in the city. He supplies a growing proportion of his store's products from an outdoor cannabis farm in Glen Ellen.

"I went to bed Sunday with all these high winds, and I was concerned because I thought the plastic greenhouses would rip," Pearson recalls. "When I woke up at 1:30 a.m., and I saw all that smoke and fire, I knew there were problems."

By the time Pearson drove down the road to the farm, it was essentially gone. "The barn where we store and cure our cannabis was on fire – and people live in there." They escaped, as did Pearson, and later, by cutting a fire line with a chainsaw, he was able to save his residence.

The timing couldn't be worse. SPARC and other cultivators are in the middle of their harvest, and their losses will be major. Pearson may be able to save some of his crop through CO2 extraction for oils, he says. And as far as his dispensary's supply chain, "there's plenty of cannabis in California." The dispensary has made arrangements to stock up from other providers, and both locations remain open for business as usual.

But Pearson is a big fish, and his concern, from an industry perspective, is for the small farmers. In Sonoma, hundreds of them are transitioning from an unregulated market to a regulated one, and this year in particular, they've spent money on biological impact reports for their land, on application fees, and on other investments to enter the legal fray.

They've also grown more supply than ever before, according to Pearson, to keep up with the tumbling price of cannabis. "You've got folks who have, more often than not, put their life savings into this year," he says.

A California Growers association leader puts the losses to farmers, including property damage, in the millions. An estimated 3,000 to 7,000 cannabis farmers operate in Sonoma alone, while Mendocino, also in the path of fire, is home to 7,000 to 10,000 farms.

As friends of the wine industry show their support in this difficult time, so, too are friends of North Bay marijuana farmers pitching in to provide assistance. SPARC, for one, is accepting donations of non-perishable food, toiletries, and pet food at their SoMa and Lower Haight locations, which will go to fire victims generally. The California Growers Association, meanwhile, is raising funds through the donations site YouCaring specifically to help growers in California who have been affected by the fire and may have no recourse.

Some cultivators who have emerged unscathed, like Santa Rosa's CannaCraft, are chipping in as well. "Effective immediately, a portion of all CannaCraft sales will be donated to assist in local relief and rebuilding efforts," the company wrote earlier this week.

They're also donating in trade, so to speak. "CannaCraft's brands, AbsoluteXtracts and Be Kind Flower, are donating over $50,000 of medical cannabis products to patients who have been displaced or evacuated due to the Northern California fires," the company wrote today, listing dispensary partners in Santa Rosa and Sebastapol for pickup. 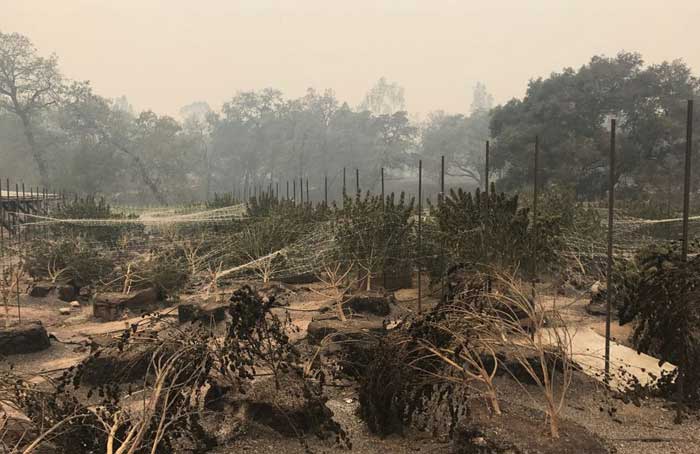 How The California Wildfires Will Ravage The Weed Economy