CA: Pot Competition Up In The Air

The planned second Humboldt County Cup marijuana competition at the Humboldt County Fairgrounds next year is up in the air after Ferndale police chief found inconsistencies with the scope of the event in relation to state and local laws.

"We are currently working in direct coordination with the Ferndale Police Department, the Humboldt County Fairgrounds and the community to alleviate any legal concerns in regards to distance from schools, public smoking laws and local jurisdiction control of cannabis use," Humboldt County Cup founder Matt Smith-Caggiano said in an email.

According to the event's website, it's set to take place Saturday, Jan. 21, 2017, with judging in categories such as indoor and outdoor grown, sativa and indica dominant strains, and others.

"I have four issues with what they propose," Ferndale Police Chief Bret Smith said.

The first issue is that under Proposition 64, there is no smoking allowed in public, and the fairgrounds are public. This is compounded by the second issue – county and city ordinances also don't allow smoking in public places or facilities. The third problem is smoking isn't allowed within 1,000 feet of school property and Ferndale High School borders the fairgrounds.

The last issue is that Ferndale doesn't allow the dispensing marijuana, he said.

"In the city limits, you can't sell, give away and so forth," Smith said.

"I think the scope of the event changed a bit from our initial meeting," Conway said.

The event is sponsored by Humboldt National Organization for the Reform of Marijuana Laws, Smith-Caggiano said.

"Working in coordination with NORML affiliates, we have prepared a legal defense in favor of the Humboldt County Cup event regarding distance to schools, public consumption and local jurisdiction controls," he states. "This draft document was not intended for the public at this time and we were hoping to resolve the issue without public scare tactics or a media circus that would have a negative impact on our community's faith when coming out of the shadows and into the light.

"... Our goal is to comply with the vote of the people for cannabis rights that was set forth medicinally 20 years ago and now for adult use, while at the same time respecting those against cannabis medicinal or adult use," he continued.

The outcome of such a case, if one happens, would set precedents, according to Smith-Caggiano.

According to the event website, a medical marijuana recommendation is not required to attend, but attendees must be at least 21 years old or be 18 years old with a medical card to enter the "on-site medicating smoking area," in accordance with state law. Attendees may also bring cannabis and "smoking accessories" to the event.

Both Smith and Conway said they work closely together to ensure all events in fairground facilities follow applicable laws.

"Once they gave me that information, it appeared inconsistent with state law and some local ordinances," Smith said about the event's plans.

Smith said he talked with organizers about possibly narrowing the scope of what would be going on during the event or changing the location as options.

"They're aware of it, they understand and they are considering other options," Conway said of event organizers.

"Humboldt County has a great opportunity for our community to move forward and improve our social and economic problems," Smith-Caggiano stated. "Humboldt County Cup tourism is increasing for our local area, jobs are being created, people have contacted us planning vacations and purchasing airline tickets from Boston, Florida and Jamaica to name a few." 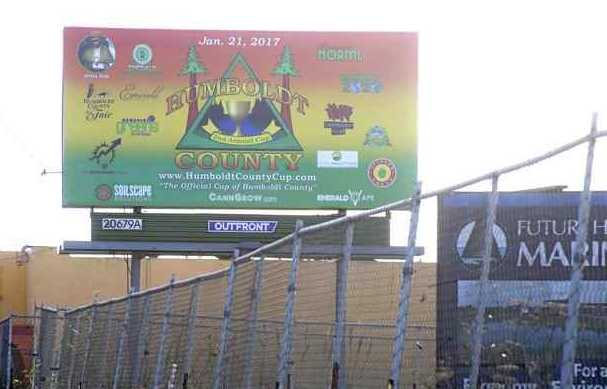 The Blunt On Humboldt