Some will be ringing in the New Year with a glass of champagne and some may be legally celebrating with a joint.

Forbes reports a 71 percent increase in marijuana orders on Dec. 31.

But those services, although readily available, are not yet legal in San Diego.

City leaders said the 45-day ban was meant to buy them time for city officials to set-up land use and public safety regulations.

Under state law, marijuana delivery services are illegal except from a licensed retail medical marijuana dispensary.

There are currently eight legal dispensaries in San Diego, but they say they are getting pushed out of the market by illegally operating delivery services that face no regulations.

Some other legal considerations: The San Diego County Sheriff's Department is reminding people that despite Prop 64, weed remains illegal for people under 21.

It is also illegal to drive with an open container of marijuana in the car, and especially when high.

Finally, it is illegal to smoke marijuana or consume edible marijuana in public, according to a fact sheet by SDSO. 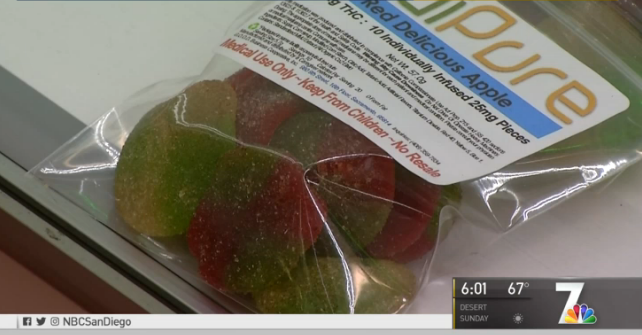