One vote - that's how little separates the pro- and anti-Proposition 64 voter tallies in Trinity County.

Voters in neighboring Shasta County, however, shot down Proposition 64 - but barely.

The Shasta County elections clerk's unofficial tally shows Proposition 64 failing by a margin of 52 percent against to 48 percent in favor, bucking the state's pro-legal pot vote.

But Shasta County also bucked a previous anti-marijuana trend that included two double-digit defeats for cannabis in midterm elections - the 2010 ballot measure to legalize weed and a 2014 ban on outdoor medical marijuana grows and strict rules for indoor ones.

Even with about 10 percent of votes yet to be tallied, Shasta County voters appear to have come close to passing legal weed.

Siskiyou County actually did - 51-49 percent, according to unofficial results.

What changed between 2010, when polls pointed to slightly lower support but voters rejected legalization, and 2016 is turnout, said David Kordus, a survey research associate with the PPIC, a nonpartisan think tank that has conducted biannual surveys about legal cannabis since 2010.

"It's kind of like, the (political) party differences are huge, as is age," he said.

Support among Californians who identify as Democrats and independents is around 63 percent and 58 percent, respectively. Republicans oppose legalization at a 2-to-1 ratio, though their support has been more volatile in surveys, he said.

Young people's support continues to grow, mostly among those under 35, while their older counterparts, especially 55 and older, continue to oppose marijuana at levels similar to 2010, when a previous legalization measure failed, he said.

But that was a midterm year - presidential elections typically draw far more young people and Democrats to the polls, Kordus said.

But in 2012 and 2008, turnout reached 77 percent and 84 percent, respectively. She expects turnout to be about the same percentage as 2012, but added the number of registered voters has grown since then.

Another possible factor: With Proposition 64, California and three other states joined the four where weed is legal, said Kathy Lee, a lecturer of political science at Humbodlt State University.

"It has kind of become more acceptable, given that those states have passed it and the world hasn't ended," she said. "These things have kind of a snowball effect."

The Emerald Triangle also appears divided over marijuana, with Trinity County's yes tally of 2,417 one vote ahead of the no side. About 1,000 votes have yet to be counted.

Some marijuana growers may have voted against legalization to keep the status quo, she added.

"There are obviously changing views on the use of marijuana in our society," he said.

But how much of an effect isn't known yet as Shasta County has 8,000 ballots that require additional work to be counted, said Darling Allen.

About half of those are mailed ballots, according to the Secretary of State's website. As long as they were postmarked by Election Day, they are valid even if they came in as late as Monday, said.

They also have some ballots that the machines can't read so humans have to count them, she said. They hope to finish their unofficial tally before Thanksgiving Day.

But those votes likely won't change any race that isn't still a nail-biter. About 70 percent of Shasta County voters received ballots in the mail this year, so mailed ballots generally are representative of the entire electorate, she said.

"Since 2005, we've counted more ballots from the mail than from the polls," she said. "Those ballots left to be tabulated are from all over the county."

Indeed, about 90 percent of those 8,000 ballots would have to vote against Proposition 64 to get the vote's spread up to 10 percent. In order for Proposition 64 to win in Shasta County, it'd need yes votes from three out of every four ballots.

Regardless, it won't change the statewide vote for the measure, Bosenko said.

That means Shasta County will have to revisit its medical marijuana ordinance, which bans growing anywhere besides a secure outbuilding, Bosenko said.

But in the longer term, he worries Shasta County will see increases in marijuana-related emergency room visits and fatal crashes that other states experienced post legalization.

Besides injuries, those situations can mean more costs to the public even as the expected hundreds of millions in taxes go up in smoke, Bosenko said. Marijuana users may decide to get a medical recommendation to avoid the 7 percent sales tax on marijuana sales under Proposition 64, he said.

But in Shasta Lake, the only place dispensaries are allowed between Mount Shasta and Chico, the city has been researching legal marijuana and what it could mean for the city, City Manager John Duckett said. Last year a special medical pot tax brought in just under $420,000.

Complaints have fallen by about 50 percent since 2013 and number about a quarter of the 81 complaints received in 2014, Duckett said. Most center on smells and visibility, so the city is exploring banning outdoor grows with Proposition 64 guaranteeing the right to grow up to six plants inside a home, he said.

But city staff members also plan to ask the City Council for direction on what, if any, businesses to allow in town besides the three dispensaries, all of which have discussed becoming for-profit, entering the recreational market when retail sales become legal and possibly expanding, he said.

Certain groups have contacted the city interested in growing commercially," Duckett said. "We've had at least three contact us."

Both Proposition 64 and Proposition 19 sought to legalize marijuana for adult use, though they had different regulations. But while the former passed Nov. 8, the latter tanked statewide in 2010. 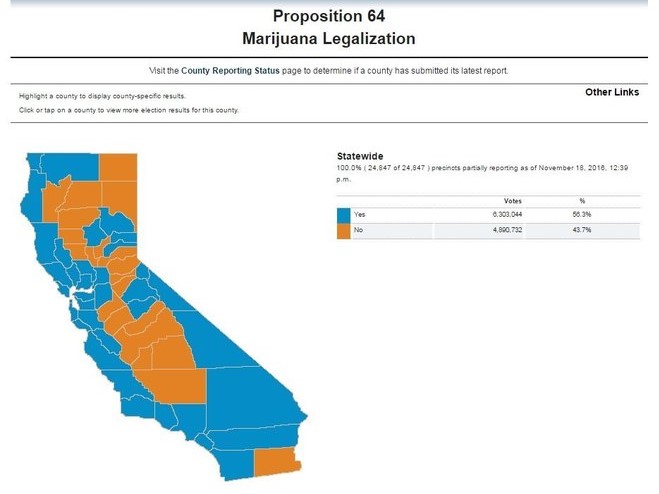