CA: Taxing Legal Marijuana Sales Not as Easy As It Sounds

One of the common selling points for regulating and legalizing cannabis has been the government's ability to tax the industry to generate potentially billions of dollars in new revenue.

However, regulators' ability to enforce these new tax laws are being complicated in California by a combination of federal restrictions on access to banking and the novelty of a regulated cannabis industry.

"It is clear the machinery of federal government is clunking along behind the trending preferences of the American people," Chiang said in a statement. "The people increasingly proclaim cannabis use acceptable. Yet federal law maintains its use is a crime."

When California voters chose to legalize nonmedical marijuana through Proposition 64 in November, they also implemented a new cultivation tax system, which will be developed and overseen by the state Board of Equalization.

The tax will be assessed starting in January 2018 and will be collected at the time of harvest. The tax rate is based on the weight of product and is currently set at $9.25 per dry ounce of flower and $2.75 per dry ounce of leaves. The board has the ability to adjust the tax rate annually and can create other tax categories for cannabis products.

This new tax format poses a challenge for the board as it must collect the tax from what is expected to be tens of thousands of commercial cannabis farmers in the state. In comparison, the board collects taxes from tobacco and alcohol industries from the distributors of which there are only a few hundred in the state, according to board spokeswoman Venus Stromberg.

Cannabis concentrates also pose another hurdle in the board's ability to ensure untaxed cannabis does not hit shelves in the regulated market.

"Unlike cigarettes, for example, marijuana can change in composition from the time of harvest to when it ends up on a dispensary shelf," Stromberg said. "For example what starts out as a 1-pound bag of marijuana leaves can end up as multiple edible products containing marijuana extract.

"Because of this nuance, a robust track-and-trace system will need to be in place to indicate on the marijuana or marijuana product that the cultivation tax was paid at the time of harvest," Stromberg said. "The tax will also require tens of thousands of cultivators, who may have never interacted with the (board) before, to register for a cultivator permit and remit this tax."

Humboldt County is currently testing out its own track-and-trace system with the international tracking company SICPA, which currently tracks California's cigarette sales. The program is being eyed as a potential model for the state system.

Humboldt County also passed its own marijuana cultivation tax in November, which takes effect on Jan. 1. County Treasurer-Tax Collector John Bartholomew said their only current method to collect this tax is to send an invoice to the cultivator.

"If it's strictly an invoicing collection system, my concern is that due to the transient nature of some cannabis growers, we might never be able to collect those excise taxes from people permitted to grow that decide to move out of the area once their crop has been harvested," he said. "We would not have an effective way to collect those excise taxes because they would not be tied to the land, so to speak."

The solution to this problem would be to tie the cultivation tax to the property through the county tax roll, but that will require changes to state tax laws by the Legislature, Bartholomew said.

"The whole reason I want cannabis taxes on the tax roll is because once it's on the tax roll like any other secure tax, then we have the tools available for us to collect those taxes, including taking the property to auction to get property taxes paid," Bartholomew said. "It would then give us the same tools for collection as we do currently on our property tax bills."

Bartholomew is a member of the California Association of County Treasurers and Tax Collectors, which has placed this tax roll issue on its legislative platform for 2017. He was also one of the associations's representatives that attended the cannabis banking working group meeting in Sacramento to discuss federal banking restrictions.

With marijuana being classified by the federal government as a Schedule I narcotic with no medicinal uses, many banks are reticent to open any accounts to marijuana businesses for fear of a federal crackdown.

The 16-member working group, along with about 100 attendees including cannabis industry and banking stakeholders, gathered in the state Capitol building not so much to discuss solutions, but to lay out the challenges ahead.

With exception to the few businesses that have found willing banks and credit unions, most of the cannabis industry has had to resort to being a cash-only market, which comes with its own complications around tax collection and security.

"The cannabis industry is the largest shadow economy in California," working group member and Board of Equalization Chairwoman Fiona Ma said in a Monday statement. "Allowing them banking access would facilitate compliance and bring millions of dollars into our economy."

The state of Colorado sought to address this issue by creating its own cannabis credit union in November 2014, but the Federal Reserve rejected the state's applications to create a master account that would have allowed banks to do business with the credit union.

The state challenged the rejection in federal court, but U.S. District Court Judge R. Brooke Jackson dismissed the case in January 2016 stating that he was compelled to do so because marijuana remains illegal under federal law.

The U.S. Department of Justice has issued guidelines to prosecutors about not pursuing investigations into marijuana businesses unless certain conditions were not met. However, Jackson stated in his nine-page opinion the guidelines suggest prosecutors look the other way when banks are "violating the law."

"A federal court cannot look the other way," Jackson wrote.

Whether the Department of Justice guidelines will remain intact next year has been called into question after President-elect Donald Trump nominated Alabama Sen. Jeff Sessions – a vehement adversary to marijuana legalization – to become U.S. attorney general.

"Defining the problem is our first objective," Chiang said. 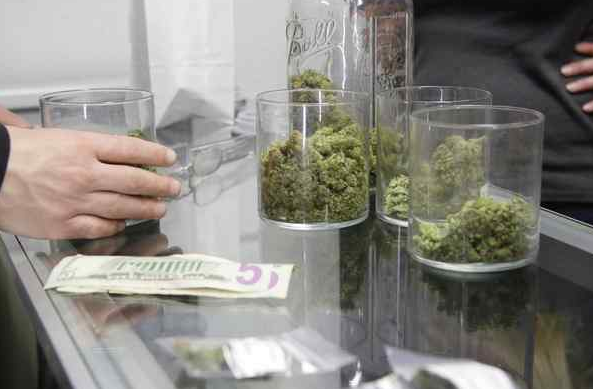