The Thousand Oaks City Council this week introduced an ordinance that will allow one medical marijuana retailer and one marijuana testing facility in an industrial-zoned part of town.

The ordinance is scheduled to be adopted at the council's Nov. 28 meeting and will become effective 31 days after that.

The California Medical Marijuana Regulation and Safety Act, which went into effect Jan. 1, 2016, established state licensing for the commercial cultivation, manufacture, retail sale, transport, distribution, delivery and testing of medical marijuana. But it is up to local jurisdictions to decide whether to allow or ban medical marijuana dispensaries within their borders.

Under Proposition 64, the Adult Use of Marijuana Act that was approved by California voters in the Nov. 6, 2016, general election, all products sold at medical marijuana or recreational marijuana dispensaries must be tested for quality control at a state-licensed laboratory starting next year.

But at its June 27 meeting, the City Council indicated it was possibly leaning toward permitting one medical marijuana dispensary and one marijuana testing facility in an industrial area of the city. The council directed the city staff at the time to write a proposed amendment to the city's municipal code chapter on marijuana, establishing a regulatory framework for the dispensary and the testing facility. That's what was introduced at Tuesday night's council meeting.

The council did not want the proposed amendment to include large-scale cultivation of marijuana – either medical or nonmedical – transportation of it between state-approved facilities, manufacturing, distribution or delivery.

"Tonight's action by council ... is a good reflection of our community on very complex and difficult issues," said Councilman Andy Fox.

"We did take that community survey – 56 percent of the community is for medical marijuana (dispensaries), juxtaposed against 55 percent who were against recreational (dispensaries)," he said. "So I think the message was loud and clear."

Mayor Claudia Bill-de la PeÃ±a characterized Thousand Oaks' approach to marijuana as a middle path compared to some other cities in the county.

"It is true that there are five other cities in Ventura County which are banning this completely," she said.

They include Thousand Oaks' next-door neighbor, Simi Valley, which this week extended bans on outdoor cultivation of marijuana plants at residences, marijuana deliveries to and from locations in the city, commercial non-medical marijuana activities and smoking and ingesting marijuana in public places. The Simi Valley council has asked the city staff to research questions and concerns it has about the prohibited marijuana practices and report back to it by March 1 for further consideration.

Port Hueneme, on the other hand, Bill-de la PeÃ±a said, has a new nickname – "Pot Hueneme."

In July, Port Hueneme became the first city in the county to open its doors to applicants looking to start retail medical cannabis operations. The city has thus far approved two medical marijuana dispensaries, with a few more moving through the approval process.

Port Hueneme City Manager Rod Butler said Wednesday that "our City Council is actually embracing the 'Pot Hueneme' moniker, as long as it is used in a good-natured way." The majority of the council who have supported allowing cannabis-based businesses in the city "seem very confident that it will be a good thing for the city in the long run," Butler said.

Thousand Oaks Community Development Director Mark Towne said in an interview that the City Council could approve operators for the dispensary and the lab by June.

"We're still developing the procedure for the actual application review process," he said.

Towne said there has been "a lot" of interest from potential applicants.

"Now it's up the council to decide who do they really want to give those permits to," Towne said.

Even if the council approves operators in June, it might still be some time before the dispensary and especially the lab open for business, he said.

"I don't know if the operators would retrofit an existing building or build a new building," he said. "A chemical laboratory would require specialized equipment and facilities and floor plan and all that. So it's hard to say."

The California Bureau of Medical Cannabis Regulation has said there is a need statewide for more such testing labs.

Under the Thousand Oaks ordinance, the medical marijuana retailer and testing lab must be in an industrial zone. The retailer's hours of operations are limited to 10 a.m. to 7 p.m. seven days a week. Medical marijuana sales must be by appointment only and the retailer must have sufficient security measures in place.

"There is a myriad of ways medical marijuana is harming communities," she said.

But Joe Kyle, 26, of Newbury Park, said he's seen "first-hand the benefits of this medicine."

He said in an interview that he favors more than one medical marijuana dispensary in Thousand Oaks.

"I've been talking to (the city) for a year and a half now, and I've been asking for a minimum of three so as not to force all those patients to one location," he said. 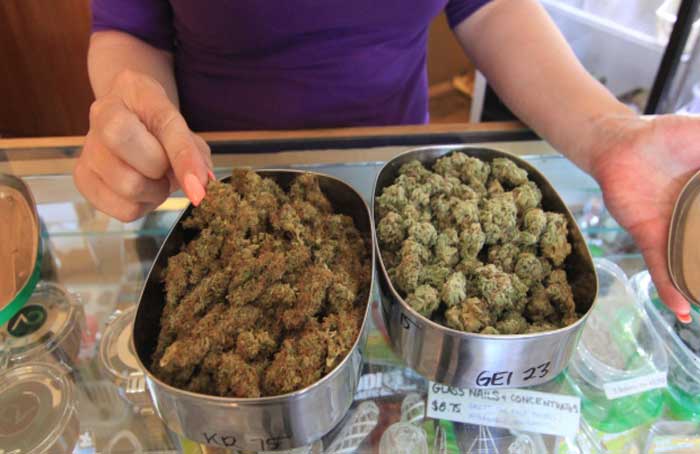