In California's famed Emerald Triangle marijuana growing region, cannabis farmers by the thousands have stepped out of the shadows to apply for permission to do business in state's newly regulated marketplace.

The rush of applicants, totaling nearly 3,000 between Humboldt and Mendocino counties, marks the clearest answer yet to the question posed last year before and after the state's landmark popular vote on recreational use of marijuana: Would growers and others in long-illicit parts of the trade come forward and participate in the new legal marketplace?

So far, at least in the northern parts of Cannabis Country, the signs are encouraging, officials said.

"It is a staggering number," said Bob Russell, acting deputy director of Humboldt County's planning and building department. "It is an unprecedented volume of applications for our department and likely for any other department."

Plenty of issues are cropping up even in that formal process, including complaints of burdensome regulations and cost that growers fear will hobble them at key time, when the competitive field is taking shape.

Still, the Emerald Triangle may already have a head start on operators in Sonoma County, where the stampede of interest has yet to materialize, prompting talk among industry leaders concerned the area's longtime cannabis producers may be opting out of the newly regulated market, at least for now.

Only 18 potential cannabis cultivation projects have submitted permit applications since they were available July 5, in addition to two manufacturers and a distribution plant, according to county staff.

The slow start has local cannabis advocates concerned a dearth of permitted cultivators could foreshadow a low supply of locally produced cannabis and be an indication farmers are taking a wait-and-see approach, maintaining their black-market sales.

"It's incredibly low compared to the number of operators we have in Sonoma County," said Tawnie Logan, board president for the Sonoma County Growers Alliance and a member of the county's newly created cannabis advisory group. "It's primarily because there's no incentive."

The alliance estimates there are about 5,000 growers in the county.

The cost to secure a permit – from permit fees to environmental studies and building improvements – is a formidable hurdle without incentives like grant programs or other funding sources available to emerging industries, Logan said. The basic fee to apply for a permit is between $2,000 and $13,000 not including the upfront costs of upgrades and consultants to meet requirements.

A local permit gives applicants priority when seeking state licenses to operate cannabis businesses, available starting next year. A state license will in theory give cannabis businesses access to a wider marketplace, including sales to dispensaries, and a sense of protection from the federal government, which still considers marijuana an illegal drug.

So far, 651 applications for cultivation have been turned in over the past 2Â½ months in Mendocino County, where the county has attempted to give so-called "mom and pop" farmers an edge by barring newcomers from the permit process until 2020. The county has granted one license.

In Humboldt County, more than 2,300 entities sought permits for marijuana ventures over an 11-month period ending December 2016, the county's initial window to apply. The vast majority were for cultivation.

Sonoma County Supervisor Susan Gorin acknowledged at Tuesday's board meeting that officials were surprised by the low number of applicants so far, but said she expected the pace to pick up.

"We didn't have the stampede on day one of the permit process, but they will come, I know they will," Gorin said.

The number of permit applications filed in Sonoma County will likely jump before Aug. 31, a deadline for avoiding exposure to certain land-use penalty fees. Ricard said he expects a flurry of applicants to come into the permit department before that date.

Sebastopol attorney Omar Figueroa said he is helping a handful of clients who plan to start a cannabis venture in the county, and he expects to file several permit applications in the coming weeks. "There are not as many as I was thinking but that's because growers are between a rock and a hard place," Figueroa said. "It's just not worth it to grow legally in the county."

Erich Pearson, executive director of SPARC and Peace In Medicine with dispensaries in San Francisco, Santa Rosa and Sebastopol, said it will cost SPARC about $15,000 to file an application for a greenhouse on his farm in Glen Ellen, and that's just the first of several permits he and his collaborators hope to acquire.

Under the blazing sun Wednesday afternoon, farmworkers were trimming the undergrowth of 2-foot potted plants in rows of hoop houses an old turkey farm off Highway 12 that had languished for years until Pearson's project moved in earlier this year.

They have hundreds of plants and clones in pots on the property and a half-acre of cannabis plants in the ground.

"The regulations are too stringent, the application fees and taxes are too high," said Pearson, standing near a team of gardeners trimming plants. "The preconception is the growers have financial means, but they don't."

His organization is well positioned to dive into the new regulated realm, with resources, experience and political savvy to engage in the system. Pearson sits on the board of the National Cannabis Industry Association and his team of staff and consultants include people with policy experience with Americans for Safe Access and horticultural experts from Oaksterdam University in Oakland.

Those first in line and out of the gate, with capital to support their business, will have the advantage, he suggested.

"The supply (of regulated cannabis) will be driven by millions of square feet of cannabis being produced in Southern California and Humboldt County," Pearson said.

One of the first operations given conditional use permits in Humboldt County was a nearly 7-acre cannabis farm and processing center, Honeydew Farms, proposed by a husband-and-wife team.

The county has issued 46 permits so far and have another 900 in progress as county staff work with business owners to identify outstanding requirements. The remaining 1,400 applications are inactive with the county waiting for additional information from the applicants.

About 70 percent of Humboldt applicants are already involved in cannabis production in the county, mostly in cultivation, with about 20 percent of applicants seeking to start new cultivation projects, according to Russell. In response to a lawsuit, the county must finish an environmental study of its ordinance before it accepts more applications.

"For every applicant in Humboldt County we probably have 10 people who will likely sell in the black market," Russell said. "I don't think California will have a problem with supply."

In Mendocino County, the backlog in approving applications is a factor of flaws in the program that need fixing, county officials and cannabis cultivators say.

"It's a long process. There are a lot of steps and a lot of waiting," Interim Agricultural Commissioner Diane Curry told county supervisors during a public hearing aimed at collecting and considering complaints about the permit process, which her department oversees.

The single approved permit, as of Tuesday, was on property that had no buildings and no environmental issues to deal with, Curry said. Four other permits were imminent, Curry said, and she expected as many as 10 to be approved by the end of the week.

There are an estimated 10,000 cultivators in the county, but Curry said she expects only about 1,500 of them to apply for permits. Those growing in areas smaller than 100 square feet are exempt from permits.

In the county's most northern region on Bell Springs Road at a cannabis farm called Mendo Hideout, Todd Franciskovic watched as a helicopter flew overhead Wednesday afternoon. His group has applied for a 10,000-square-foot outdoor garden.

"We're getting a flyover right now, which is OK. We talked to the sheriff yesterday," said Franciskovic, farm cultivation manager. He was among many cannabis farmers number who urged the Board of Supervisors to streamline and improve its application review process. Without those changes, small-scale growers fear they will be driven out of business by industrial pot operations and heavy-handed regulations.

"I feel like in Mendo, people want to comply," Franciskovic said. 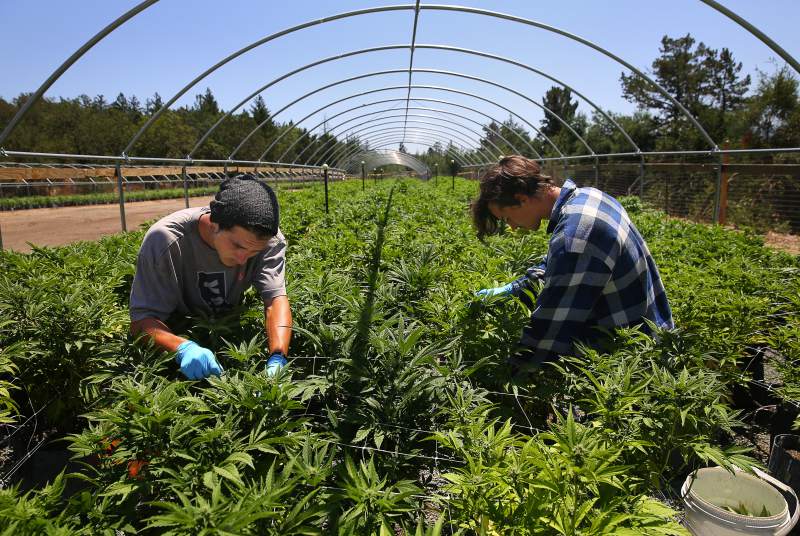