Adan Perez was in the Coachella Valley for New Year's Eve when he realized he could join California residents in doing what he can't do back home in Arizona: Legally purchase marijuana.

"I think it's amazing," Perez, 29, said Monday as he left Desert Organic Solutions Collective in North Palm Springs. "For it to be recreational, it's kind of awesome."

Marijuana enthusiasts flocked to dispensaries across the Coachella Valley Monday, which was the first day Californians could legally purchase cannabis. Roughly a dozen locations in the desert have temporary permits to sell marijuana and at least one of them attracted customers before the sun had even come up.

Under state law, marijuana could only be sold between the hours of 6 a.m. and 10 p.m. But Cathedral City Care Collective got a head start after city leaders voted in November to let dispensaries open early on Jan. 1.

Just one minute after midnight, Cathedral City Care Collective had its first customer and its owner, Nick Hughes, suspects the man may have been the first person to buy marijuana under California's new law.

"He was waiting for us to open," Hughes said. "He was excited and he seemed like he was honored to be the first."

Customers often made the same comments: Buying marijuana was now like purchasing alcohol and no one had to keep their purchases under wraps.

Joshua Tree residents Chad Kellogg and Jeanette White had been to three shops in Desert Hot Springs by 9 a.m. They were "doing the circuit" and expected each stop to have different products and dÃ©cor.

The couple budgeted $400 to $600 for what Kellogg described as "Black Friday for cannabis." They headed home after visiting five spots.

The effort required them to drive many miles, but actual purchases - as well as simply entering the stores - proved to be easy endeavors. Like others, the couple compared it to buying alcohol.

Californians voted in 2016 to legalize sales and anyone over the age of 21 can now make purchases at licensed shops. Nearly a dozen shops across the Coachella Valley - mostly on the west end - opened their doors about 8 a.m.

At least one local shop held a special New Year's Eve party to ring in the new year and celebrate marijuana legalization.

Hughes said he put word out that Cathedral City Care Collective would get a head start on sales, but he only had seven customers between 12 and 1 a.m.

But even the busiest dispensaries had customers who were reluctant to publicly show their support for the new law. Although marijuana sales are now legal, they cited personal reasons for not wanting to be interviewed or photographed by The Desert Sun.

Anyone who purchases recreational marijuana isn't allowed to smoke in public areas and the rule of thumb is that they can't use it anywhere that doesn't allow cigarettes.

Nor are people allowed to use marijuana in their cars. A number of traffic laws kicked in Monday, including one that specifically states people aren't allowed to smoke or ingest marijuana or marijuana products while driving or riding as a passenger in a vehicle.

No one should plan on simply walking into the shops like their visiting an average retailer. People will still need to be buzzed in and enter rooms filled with security cameras.

Nonetheless, people shouldn't take that as a sign that there's a problem with marijuana shops.

"We're as legitimate a business as a jewelry store, as a liquor store," Hughes said. 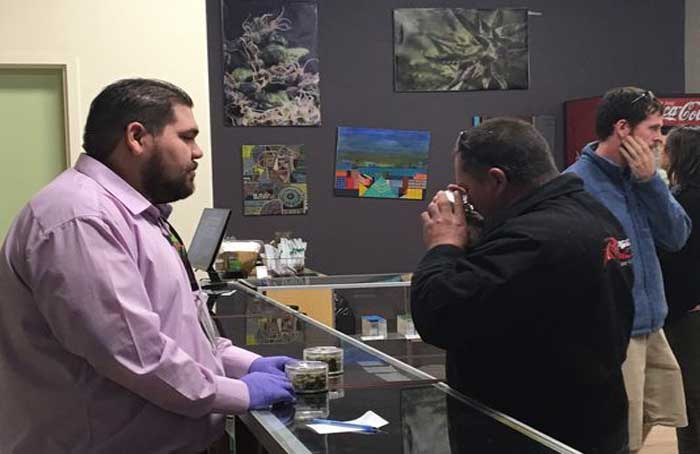