Florida's first chain of walk-in clinics for medical marijuana treatment is closing most of them less than six months after opening.

Tetra Health Care, a California-based chain that hires licensed doctors to write medical marijuana recommendations at six clinics in Florida, is closing all but one to focus on working with state lawmakers to make access easier for patients, a spokeswoman said.

Tetra had five locations in the Tampa Bay area: two in Tampa and one each in St. Petersburg, Clearwater and Brandon. A sixth is in the Orlando area.

Now patients are being directed to one remaining center in Tampa, at 2814 W Dr. Martin Luther King Jr. Blvd., for appointments and doctor recommendations.

Tetra said it will not reopen the former centers, but could open new ones in the future.

The company said recent changes to qualifying conditions as well as delays in issuing medical marijuana cards to patients are driving the clinic closures.

"Even though 72 percent of Florida residents voted yes for Amendment 2, there have been many challenges in providing our services to patients in need of medical marijuana," Tanya Cielo, the spokeswoman for Tetra, said in an email. "Between the legislative actions that have changed qualifying conditions to the state's delay in issuing medical cards to patients, medical providers like Tetra Health Care are facing serious roadblocks to providing compassionate patient care."

But Ben Pollara, executive director of marijuana advocacy organization Florida for Care and one of the authors of the medical marijuana amendment, said those reasons didn't ring true. Pollara, who had not heard of Tetra until speaking with a reporter Wednesday, said the state has "gigantically expanded" conditions that qualify patients for medical marijuana. And, he said, wait times for medical marijuana cards from the Department of Health have decreased; patients used to wait four to eight weeks for cards and are now getting them in less than four weeks.

"It sounds like these guys had a bad run at it, and they're getting out of town," Pollara said. "But I think to ascribe these external factors to the (company's) failures is a little bit of a stretch."

When asked to respond to Pollara's comments, the Tetra spokeswoman reiterated the company's stance.

Patients who visit Tetra in search of medical marijuana need to bring a valid Florida ID and proof of residency in the state for either a walk-in visit or appointment. Staffers walk potential patients through the criteria required by the Florida Department of Health to help them register as patients. Once applicants pay the $75 state fee and receive registration cards in the mail, they can go to a dispensary with the recommendation they receive from a Tetra physician to fill an order. Tetra charges $198 for the service.

Tetra isn't affiliated with any statewide dispensing company, and patients can fill their orders at any dispensary.

Pollara said companies with that business model usually get paid up front, no matter how long it takes for the patient to receive a card from the state.

More than 39,000 Floridians have signed up through the Department of Health to receive medical marijuana as a form of treatment for a list of qualifying illnesses since the registry opened in 2016. And more than 1,000 physicians have taken the state-mandated course that officially qualifies them to examine those patients and recommend products that might help. But backlogs at the Department of Health to issue patients their required identification cards has slowed down access.

"It takes approximately 30 days to process a complete application," said Health Department spokeswoman Mara Gambineri. "As directed by the law, the department is working to outsource this function." 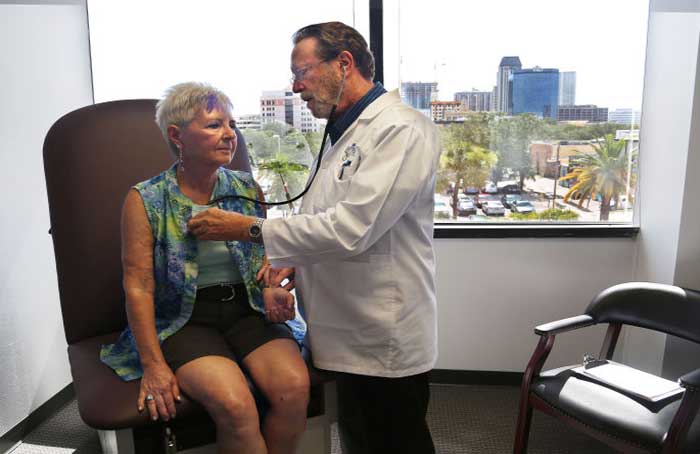