While some parts of the world are lessening restrictions on the sale of medical marijuana, Huntington Beach is going the opposite direction.

Not only did the City Council vote Monday night to clarify and strengthen the ban on marijuana dispensaries inside city borders, but council also voted to put the new ordinance into effect immediately - without the usual 30-day grace period.

The vote was 4-3 with Mayor Jill Hardy and council members Barbara Delgleize and Eric Peterson voting no.

"We need to allow some opportunities (for medical marijuana distribution) in Huntington Beach," Hardy said.

Almost 20 years after the state legalized medical marijuana, local governments can't seem to agree on how to deal with the law. In Anaheim, the city is in the process of evicting the owners of all medical marijuana dispensaries it can find. In Santa Ana, permits are available for the sellers of medical marijuana. In Costa Mesa, the City Council is considering a law to allow medical marijuana sales.

But in Huntington Beach, no means no.

City attorney Michael Gates explained that Huntington Beach has banned medical marijuana since 2007. But recently, legal challenges have claimed that the language of the ban allows wiggle room.

"The allegations are that it (the ordinance) is not clear enough," Gates said.

So the City Council doubled down on its opposition. Once the ordinance "expressly prohibiting" medical marijuana dispensaries was approved, the council voted unanimously that the stronger language should become immediately part of the law. The quick enactment doesn't allow time for it to be challenged in court.

The Council's strong opposition prompted only two comments from the public.

Clem Dominguez made light of the situation that finds Huntington Beach going a different direction than many other places.

Brandt Stebbins, who walked to the podium with the help of a cane, pleaded for the council to reconsider its strict stance.

"It hurts so much that I shouldn't be standing here," Stebbins said. ""I have to use medical marijuana. I have no other option. Be compassionate for people like myself." 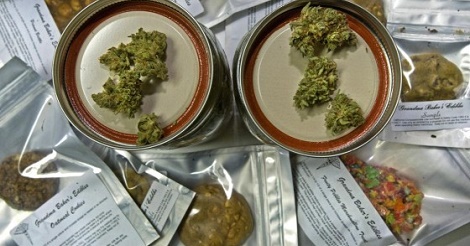