It wafts from cannabis plants growing in a murky legal terrain between acceptance and prohibition.

Over the next few years that will change, as a sweeping new package of laws will reverse years of state silence by regulating and licensing every stage of the medical marijuana industry.

For consumers, the shift will mean more assurance that their medicine won't be laden with pesticides and other impurities, but likely result in higher prices. For growers, the new regime will recognize cannabis as an agricultural product, conferring legitimacy and imposing new rules on farmers accustomed to tending their plants without a stamp of approval from the state.

"It means I'll be able to do what I'm doing without fear of persecution for the first in my life, for the first time in generations," McMahon said as workers trimmed buds from the fall harvest. "That's exciting, but it also presents a lot of questions and challenges."

While voters authorized medical marijuana in 1996, until this year the Legislature had failed to create a system for regulating it.

Marijuana farmers for years operated in a space with inconsistently enforced rules and scant oversight, with local officials tasked with monitoring what the state could or would not. Without a permitting process for legitimate operations, raids posed a constant threat. Bad actors could degrade the environment with few consequences. A lack of formal tracking allowed marijuana to flow freely to the black market for recreational, not medical use.

Now, growers will need to obtain cultivation permits and abide by rules for water and pesticide use, with state agencies policing their environmental impact and vetting labs that will test for pesticides and other contaminants. The California Department of Food and Agriculture will track medical pot's progress with a "seed-to-sale" monitoring system.

"It's such a paradigm shift in that for the last 30 to 40 years the standard procedure for a marijuana farmer was to throw away and burn all his paperwork," said Stephen Dillon, executive manager of the Humboldt Sun Growers Guild. "It was considered evidence to be used against you in a court of law."

Like McMahon, many marijuana farmers speak optimistically about the opportunity to operate free of the need for surreptitiousness and threat of raids.

"It was a low-scale war for a long time, and people are sick of it," McMahon said. "They would much rather be above board, do things right and not worry about law enforcement."

But they also warn that if permits are too costly and compliance is too cumbersome, the new regime could backfire and send farmers deeper into the woods.

"If you try to go zero to 100 all at once, you push people further underground," said Assemblyman James Wood, D-Healdsburg, an architect of the new framework. "They'll say 'hey, I never did that before, and I won't do it now.'"

Not all marijuana farmers have been growing exclusively for medicinal use. It's common knowledge that weed has far more value on the black market, and the financial motive proves irresistible to some.

"Most cannabis that comes from northern California is sold in the non-legal marketplace," said Casey O'Neill, a prominent voice for growers who runs HappyDay Farms in Mendocino County. "We know that."

For the new program to successfully divert cannabis from the black market to regulated dispensaries, farmers say, it will need be worth the time and investment required to abide by the rules and obtain permits.

"If they set up too rigorous of a program then they will not get buy-in, and if they don't get buy-in nothing has changed," Dillon said. "We will continue to have one of the largest black market industries in the country."

Dillon's Humboldt Sun Growers Guild, which operates in a co-op-like system that pools contributions of individual farmers, has modeled the new reality ahead of schedule, imposing stringent rules on contributing farmers. The cost of compliance means a higher price for their marijuana.

"They're competing with a thriving black market," said manager Chrystal Ortiz. "It's not fair that we have to compete with these people who can buy a bunch of cartel-grown cannabis ... and they're not paying taxes. They're not paying their employees. They didn't get their water permitted."

Competition with black market prices is not the only consideration. Many farmers worry that the new rules will benefit large-scale enterprises that have the resources to comply, pushing out smaller growers in the process.

Given its precarious legal position, "the sky has always been falling on the cannabis industry," O'Neill said. But now the fears are different.

"We're afraid of big business," he said. "We see these huge capitalist enterprises looking to overtake everything we've been working at this whole time, to gobble up our way of life and turn it into something to make money."

Staying afloat could come down to quality. Stricter testing and labeling standards mean cannabis consumers will get more information about what they're purchasing.

"One of the things we hope to see is the value travel back up the supply chain," said Emerald Growers Association executive director Hezekiah Allen. "If you're producing a good, organic clean product today it doesn't matter, because it disappears into the void that is the unregulated marketplace."

The state of weed sent to dispensaries and manufacturers can vary widely. One cannabis oil maker described rejecting weed that stank of rotten egg because of the spray it was treated with. The new system will bar that kind of tainted herb.

Then there's the matter of marketing. The Humboldt Sun Growers Guild already has a product name, True Humboldt, with a slogan ("Since the beginning") and a sleek website trumpeting its virtues.

"We believe the Humboldt name and history is a big brand," Dillon said.

The hope is that highlighting the origins, akin to Napa County wines or microbrews, will boost the value of the product and help smaller farmers compete with larger operations.

"Do Doritos sell more than Kettle Chips?" Ortiz mused. "I do think it will demand a premium price, and as soon as it's mandated for the dispensaries, we'll be good."

Recognized brand or no, growers will need to navigate a new distribution system with new gatekeepers.

The laws prohibit growers from getting licenses to transport their product and distribute it to dispensaries. The multi-tiered system is intended to prevent large monopolies and to impose another layer of accountability, tasking the distributor middlemen with ensuring the product stays in legitimate channels.

Some growers believe it will give them a reliable pathway to market. The current system, Allen said, "is very disorganized, very decentralized and totally inefficient."

"I don't want to drive all over the state delivering medicine," Allen said. "I want to farm."

Others worry about ceding too much control to distributors, which could dissolve the relationships they've already built with dispensaries and let larger growers occupy more shelf space.

"It doesn't matter if you have a 15-year relationship with a dispensary where your cannabis has been going, you now have to give that to a distributor," Ortiz said, but handing oversight to distributors could mean of "small-batch, craft cannabis" could "go in a catalog with all the other ones and just become a number."

There are other consequences to legitimization. Growers will be eligible for an array of state tax breaks for business expenses like equipment purchases, just as other farmers are, though federal tax relief will still be out of reach.

Anyone who obtains a license would be deemed an "agricultural employer," meaning their workers would be covered by the state's farm labor laws. They could organize or submit claims to the Agricultural Labor Relations Board.

"The UFW is definitely going to look at organizing marijuana workers," said United Farm Workers spokesman Marc Grossman. "If marijuana is going to be regulated as a legitimate agricultural product then they would be agricultural workers just like wine grape or tomato workers."

And a crop often seen as a menace will join grapes, rice and strawberries in the pantheon of legitimate California crops. Chrystal has already met with the Humboldt County agricultural commissioner, the type of contact she said would have been impossible before.

"Some folks involved in other kinds of agriculture aren't particularly thrilled this is going to be considered an agriculture product," said Wood. "Certainly in my district there are folks who cultivate cannabis and want to join the farm bureau at some point. They might ruffle some feathers."

Such legitimacy gives growers hope that they can step into the mainstream and thrive. But they also worry about what could be lost.

"I look forward to being able to continue to grow more or less on this scope," McMahon said. "I don't look forward to a future where the economy is built around growing this plant the way almonds are grown." 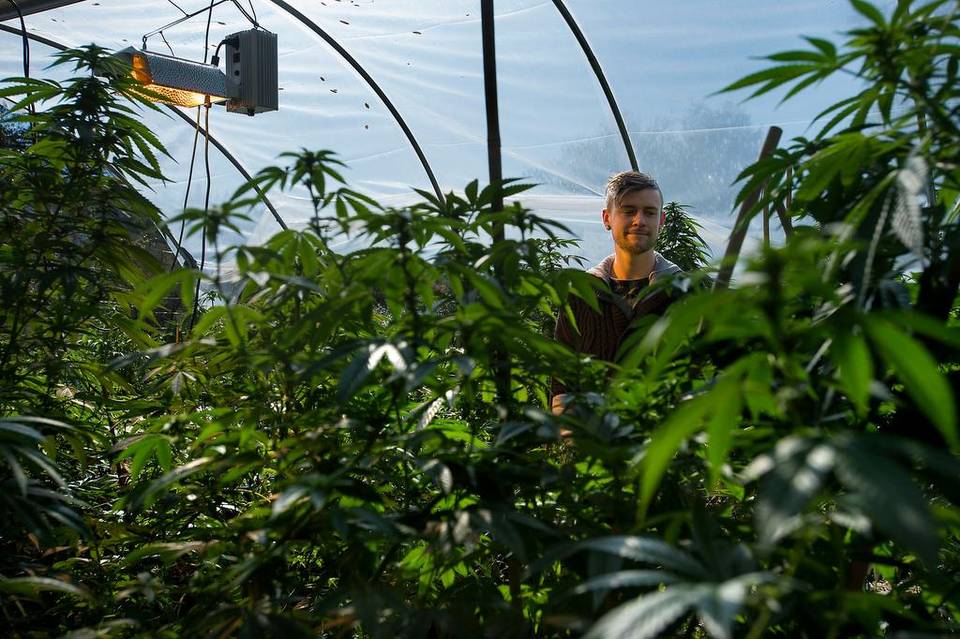