California's newly regulated medical cannabis industry is done running and hiding from police, and has started standing its ground.

Activists are cheering the newfound political muscle of legal medical marijuana, after a major police raid last week resulted in a massive protest and political pressure, then the release of a canna-business operator with no criminal charges and $0 bail.

Major California medical cannabis company Care By Design has resumed oil-making operations in Santa Rosa this week, after a disgruntled employee sparked a massive, 100-officer raid of their commercial extraction operation in Santa Rosa on Wednesday.

Police initially arrested Care By Design's operator Dennis Hunter on charges of running a meth lab-type operation, with bail set at $5 million. But the raid on the prominent, professional, well-connected Care By Design generated an unexpected backlash for police.

The following day: hundreds gathered at the Sonoma County courthouse for a large protest; a letter-writing campaign bombarded local officials; a veteran local political lobbyist stepped in; and city officials began tamping down on the dispute.

The raid "revealed the deep political connections of" of Care By Design, reports state.

Sonoma County District Attorney Jill Ravitch came out Thursday in support of medical cannabis production, and stated, "My focus at this time is to determine whether any laws have been violated which would endanger public safety or the environment."

Hunter was released within 48 hours.

The raid amounted to a 100-officer code enforcement action, with Care By Design promising to make several operational adjustments to comply with local industrial codes.

Care By Design extracts cannabis oil from raw plant matter using pressurized carbon dioxide, not flammable chemicals like butane, the company stated. The CBD Guild has tens of thousands of patients statewide, and is in the process of obtaining a local permit for their large commercial facilities.

A Care By Design spokesperson stated, "The company will work closely with government officials and law enforcement to swiftly resolve the investigation and address any and all concerns regarding our operations. We maintain our strong commitment to operating with full transparency. Our main focus is resuming operations and providing our thousands of patients with the medicine that they depend on. For some of our patients this is truly a matter of life or death."

Thanks to the new Medical Marijuana Regulation and Safety Act (MMRSA) - a statewide framework for regulating the 19-year-old, billion-dollar California industry - Care By Design staff is not facing serious charges and closure. With MMRSA in place, Sonoma County and the city of Santa Rosa are in the middle of licensing facilities like Care By Design, which are increasingly legitimate in the eyes of the local officials.

The Santa Rosa Police Department led the raid on Care By Design on Wednesday, seizing thousands in cash, computers, product, taxes and financial paperwork, and arresting Hunter, charging him with chemical drug manufacturing, and setting his bail at $5 million.

"I am one of tens of thousands of patients that use a medical marijuana product made at those facilities. I use it for a medical condition at the recommendation of my doctor. I use it because CBD Guild's products are safely extracted, consistently formulated, lab tested, and clearly labeled.

This law enforcement action deprives patients like me of access to medical marijuana that is produced with exceptional attention to patient and community safety. This action also threatens the livelihood and employment of hundreds of Sonoma County residents.

Please allow CBD Guild operations to resume immediately, and restore patient access to their medicines."
Hunter said he was overwhelmed by the support for Care By Design. "We have heard from thousands of patients expressing their heartfelt hope that CBD Guild can continue making safe and effective cannabis medicines available as soon as possible," he stated. 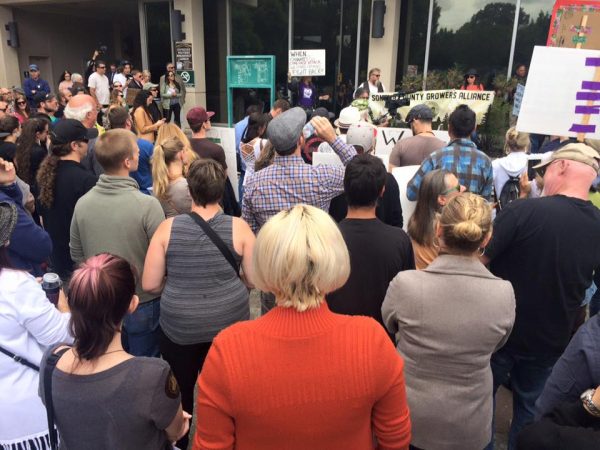