Fall has arrived, and with it the annual effort by law enforcement across the country to eradicate the outdoor marijuana crop. Nowhere is the effort more elaborate or impressive than California, where the Campaign Against Marijuana Planting (CAMP) has been heading out into the countryside to rip up pot crops since 1983. CAMP, an amalgam of 110 federal, state, and local law enforcement agencies, racks up big numbers every year, but there is little indication that the program has any impact whatsoever on the price or availability of marijuana in California.

Last year, CAMP raiders seized more than 1.6 million marijuana plants, the majority of them from large gardens nestled within the state's national parks and forests. This year, the total will be significantly higher, according to CAMP.

"Our plant count is definitely higher this year, and we still have a few more weeks to go," said CAMP spokeswoman Bureau of Narcotics Affairs Special Agent Holly Swartz to Drug War Chronicle. "This year so far, we're at 2.49 million."

The numbers sound impressive at first glance, but not so much when compared to estimates of outdoor marijuana production in the state. According to researcher and policy analyst John Gettman's Marijuana Production in the United States (2006), which relied on official government statistics to arrive at its estimates, the 1.6 million plants CAMP eradicated made up less than 10% of the 17.4 million plants planted.

Similarly, while CAMP proudly boasts that over its near quarter-century history it has eradicated $27.6 billion worth of pot plants, Getttman puts the value of last year's outdoor crop alone at $12.3 billion. (Never mind for now that CAMP apparently values each plant at about $4,000, while Gettman assesses them at under $1,000).

While CAMP cannot claim to make a significant dent in California marijuana production, neither can it offer evidence that its efforts have increased prices or decreased availability. "We don't evaluate prices or availability," CAMP spokeswoman Swartz conceded, while insisting that the program was having an impact. "The majority of the gardens are run by Mexican trafficking organizations, and taking them out must have an impact," she said.

"Nobody has seen anything on price or availability from these folks for a long time, and as far as I can tell, prices here have been steady for a decade," said Dale Gieringer, head of California NORML.

"What they achieve is virtually nothing," said Bruce Mirken, the San Francisco-based communications director for the Marijuana Policy Project. "The number of plants they manage to eradicate has risen twelve-fold over a decade, yet marijuana is by far the number one cash crop in the state. If the idea is to get marijuana off the streets, this is as crashing a failure as any program you've ever seen."

But CAMP is also protecting the public safety, said Swartz. "It's a huge threat to public safety," she said. "You have people out enjoying public lands and they come across drug trafficking organizations and people with guns."

The threat is not just to the public, said Swartz. "Every year since the mid-1990s, there have been shots fired during at least one garden raid."

CAMP has brought it on itself, said Mirken. "CAMP has literally driven the growers into the hills," said Mirken. "There's a good case to be made that all this stuff they're moaning about being so terrible -- growing in the forests, the wilderness areas -- is the direct result of their efforts. All they do is aggravate the problems associated with marijuana production, all of which could be resolved if we treated it the same way we treat California's wine industry."

"This thing with the huge plantations in the national forest has really taken off since 2001, and I suspect it has to do with the border crackdown since then," said Gieringer. "I think some Mexican groups may find it easier to just grow it here. There has been really striking growth in the number of plants they are eradicating, and it will be even higher this year."

But the resort to the use of public lands by marijuana growers predates this decade and was driven by tough war on drugs tactics a generation ago, Gieringer noted. "This whole problem started during the Reagan administration, with the asset forfeiture laws they passed. Before that, people grew on their own land," he said. "Growing in the forests is one of the fruits of that aggressive enforcement strategy."

But despite the seeming ineffectiveness and unforeseen consequences of CAMP, the program is not facing any threat to its existence. Part of the reason is that it is relatively inexpensive. According to Swartz, the California general fund paid only $638,000 to fund CAMP last year, while the DEA and the High Intensity Drug Trafficking Area (HIDTA) program kicked in another $1.4 million and the Forest Service $20,000.

"It's not a huge amount of state money, but it would pay for a bunch of students who are getting their fees increased every year to go to the University of California," said Mirken. The figure also does not include the resources and staff time local law enforcement entities are putting into the program, he noted.

"It's just not that expensive," said Gieringer, "especially because they don't generally bother to chase down, arrest, and prosecute people."

In its more than 475 raids last year, CAMP arrested a grand total of 27 people. Swartz did not have arrest figures for this year.

There is another reason CAMP seems almost irrelevant, said Mendocino County Supervisor John Pinches. Mendocino is part of the state's famed Emerald Triangle, where marijuana-growing has been a local industry for decades now.

CAMP doesn't engender the hostility among his constituents that it once did, Pinches said, in part because it doesn't seem to have any effect on the county's number one industry. "Marijuana growing is out of control here," he said. "We hired economic consultants to analyze our economy, and they found that two-thirds of our economy is the marijuana business. With the medical marijuana and the cards and the caregivers, it's just blooming like crazy. Legal businesses can't hire help; they can't compete with growers paying $25 or $30 an hour to trimmers," he said.

But Pinches, who earlier this year authored a successful resolution at the Board of Supervisors calling for marijuana to be legalized, taxed, and regulated, said he now voted to participate in CAMP. "I had always voted against CAMP; I called it the best government price support system for any farm crop in the country," said Pinches. "But now it's so out of hand with gardens of tens of thousands of plants that we're almost forced to do something," he said. "Still, CAMP gets such a small percentage of the crop that I bet deer and wild hogs get more of it than CAMP, and they do it for free," he snorted.

For Pinches, a situation where his county's largest cash crop and economic mainstay is also the subject of continuing, though largely ineffective, law enforcement efforts is mind-boggling. "This is what inspired me to write that resolution we sent to all our congressmen and the president," said Pinches. "Didn't we learn anything from Prohibition days? Whether you love it or hate it, it's time to legalize marijuana."

That looks like the only way CAMP will be stopped. As Swartz noted: "We're law enforcement. We enforce the law. If they change the law, we will change our activities, but until then, we will enforce the law." 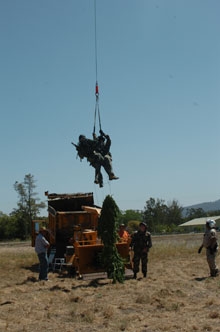 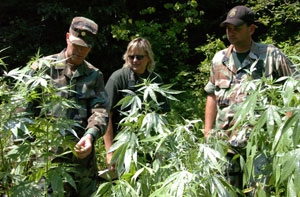 The Expensive Farce Of Marijuana 'Eradication' In California