Can Cannabis Cure The NFL's Ills?

It's no secret NFL players have abused powerful, addictive painkillers for decades. Just ask them.

"When I was playing, if you were on the road, you'd get on the plane home and there would be two beers in the seat pocket in front of you and the trainers were coming down the aisle with painkillers and muscle relaxers," said Kyle Turley, a nine-year veteran who retired in 2007. "And we were supposed to drive home from the airport? Then they blame us for our addictions.

"These guys are nothing but thug drug dealers," Turley said. "... North Dallas Forty is alive and well."

Those are pretty strong words from a controversial man who has become a strident critic of the NFL. But the persistent behavioral issues surrounding the league back up Turley's claims. The toxic mix of painkillers, head trauma and alcohol push many players over the edge.

But it doesn't have to be that way. A growing number of people believe cannabis could hold the key to curing some of the NFL's problems. To that end, a group of doctors and former players asked the league to reclassify marijuana last week, making it permissible to use for pain management. And the players' union confirmed to The Chronicle it is forming a task force to investigate the benefits of cannabis.

In an open letter to the NFL, the nonprofit group Doctors for Cannabis Regulation (or DFCR), listed some grim statistics:

"A recent study in the Journal of Drug and Alcohol Dependence found 52 percent of retired NFL players had used prescription pain medications during their active years. Of those, 71 percent reported misusing these drugs, with approximately one in seven players reporting ongoing dependence. According to another recent study in JAMA Internal Medicine, states with legal medical marijuana programs have a 25 percent lower incidence of fatal overdose on prescription opioid drugs, which suggests that cannabis is a much safer alternative for patients with chronic pain."

"I was a pretty scary individual at times," says Turley, a hulking offensive tackle in his playing days who made headlines for violent behavior, on the field and off. "I was a raging maniac."

After 20 years of opiate addiction, while battling persistent medical and mental issues, Turley turned to medical cannabinoids for relief. And it worked. He says his mental and physical health improved dramatically. And he stresses one can benefit from the treatment without getting high. (There are plenty of cannabis options that eliminate the psychoactive properties of marijuana, in the form of lozenges or balms, that help pain without intoxication.)

"What we have to date isn't working. It's creating monsters in society. It's ruining families," said Turley, now 41 and living in Riverside with his second wife of 15 years, Stacy. "I believe cannabis should be given the opportunity to help players. It's not psychoactive. You're not high. Why would we possibly keep this from the players? Why would we be giving players pharmaceuticals that are proven to kill?"

Those are crucial questions facing a league not known for progressive thinking. But it's time the NFL gave cannabis a chance. For the time being, marijuana remains a prohibited drug in the league, and 19 players have been suspended for violating that policy this season. (By comparison, baseball and hockey rarely suspend players for marijuana use, while the NBA's policy is similar to the NFL's.)

The NFL commissioner, Roger Goodell, recently said he has no plans to change the league's rules on marijuana.

That's one of the reasons Turley and other prominent players have joined with DFCR, hoping to influence the league to speed up declassifying cannabis as a substance of abuse, where it currently sits alongside cocaine and heroin, among others.

"By removing cannabis as a substance of abuse, you would also join the 76 percent of doctors who favor its use for medicinal purposes," the letter reads. "As it stands now, the (league) policy prevents players from participating in the medical marijuana programs that are currently legal in states where 22 NFL franchises play their home games."

Indeed, marijuana initiatives passed in eight of the nine states that voted on the issue this past election, including California. Currently, 26 states and Washington, D.C., have legalized marijuana, outright or for medicinal purposes. Some see this rising tide as a positive development that could spur change in the NFL. Others see an incoming conservative federal government that could delay further acceptance.

Whichever way it swings, the league and its union are taking the issue seriously.

NFL.com, a news source owned by the league, recently reported that several owners and executives are open to the discussion for the league's next collective bargaining agreement. But that would take two or three years. The players, and the doctors aligned with them, are pushing for a quicker reaction.

"At a time when 28,000 Americans per year are dying from opioid overdoses (including one of your own, Tyler Sash), the NFL could play a leading role in addressing this national epidemic," the DFCR letter said. "Your investment could certainly add to the growing body of evidence that indicates medical cannabis is a viable replacement for more addictive and potentially fatal medications."

Dr. David Nathan, a physician practicing in Princeton, N.J., is the founder and board president of DFCR, a group that includes former surgeon general Joycelyn Elders. He sees the NFL as a microcosm of a larger problem facing the nation.

"The abuse of pain medication is clearly an issue. You see the players and their later problems. It's the problem in our nation, writ large," said Nathan. "Marijuana as a complementary alternative to opioids really solves a lot of those problems by decreasing the lethality of pain management in the NFL."

The NFL Players Association confirmed it is in the process of forming the NFL Players Pain Management Committee, a group that will focus on players' use of marijuana to treat pain.

"We're still identifying people to serve on the committee. It will include players, medical professionals and researchers. But it's a serious, serious issue," said Carl Francis, a spokesman for the union.

"I don't want to put a timetable on it. But the main focus will be marijuana."

Beyond pain management, there is mounting evidence that cannabis could help treat head injuries. "There has been preliminary though encouraging research into the neuroprotective effects of cannabinoids following traumatic brain injury, which likewise merits review. Anybody with a passion for football can hardly ignore the impact of a degenerative disease like chronic traumatic encephalopathy (CTE), which is known to have affected a staggering 96 percent of former NFL players," the DFCR letter to the NFL reads.

Turley - along with former players like Eugene Monroe, Ricky Williams, Jake Plummer and Jim McMahon - is particularly excited about the treatment of head injuries.

"Pharmaceuticals should never be given to individuals with brain injuries. The chemicals compound what's gone wrong in the brain," said Turley, who played for the Rams, Saints and Chiefs. "Treating pain and neuroprotection. That's what I'm pushing for."

The players, and their allies in the medical community may be pushing, but it's unclear whether the NFL is willing to budge. Asked by The Chronicle to discuss the issue, the league's vice president of Communications, Brian McCarthy, sent this statement, edited for length:

The National Football League's top priority is the health and safety of our players and is committed to increasing safety for football players and other athletes at all levels of sport. ... Independent medical advisors to the league and the National Football League Players Association are constantly reviewing and relying on the most current research and scientific data. However, these medical experts have not recommended making a change or revisiting our collectively-bargained policy and approach related to marijuana, and our position on its use remains consistent with federal law and workplace policies across the country. If the medical experts suggest making changes, we would consider exploring with the NFLPA potential options. This has not happened.

Turley and friends have trouble understanding the league's stance.

"Anger, rage issues, all these side effects are linked to pharmaceuticals," he said. "Why would we give anyone those? I should have the choice as an American citizen to use a substance that I know works better." 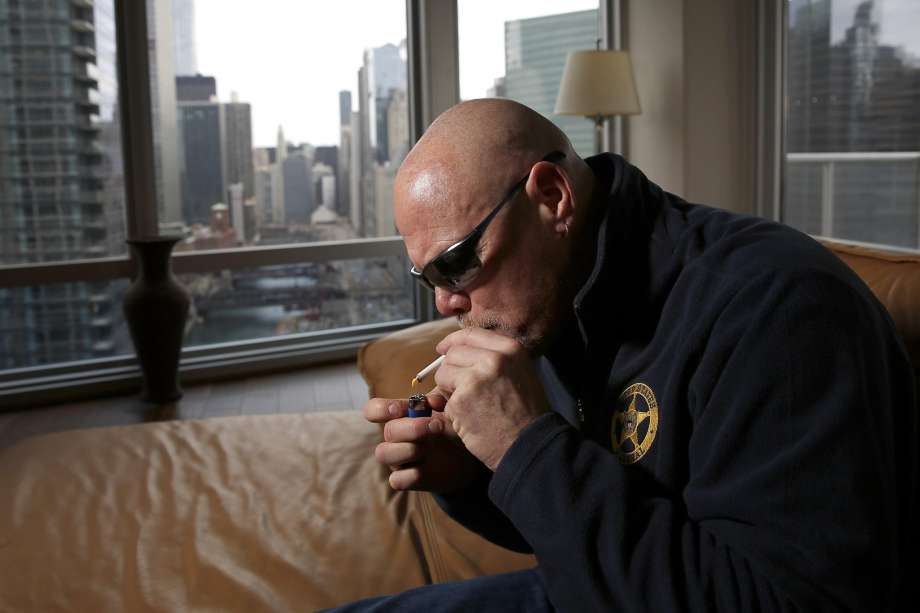 Cannabis And Concussions: The NFL Needs To Listen