Can Hemp, Long Overshadowed By Marijuana, Rise As An Industry?

Cliff Thomason left the real estate business last year to become something of a pioneer: a hemp farmer.

The Grants Pass, Oregon, man was the first in the state to legally grow hemp, after Oregon began licensing growers in 2014, joining 17 other states nationwide that have differentiated hemp from marijuana and set up separate regulatory systems for growing it. But Thomason is one of only 43 farmers in the state targeting their efforts at producing seed and fiber, as opposed to the cannabidiol oil extracted from hemp stalk and used both as a balancer of the psychoactive properties of marijuana and a purely medicinal product, easing symptoms from back pain to anxiety. In the booming cannabis industry, hemp has become a neglected stepchild.

"People are moving in a very singular direction," says Thomason, who is running for governor as an independent. The number of farmers growing industrial hemp is "pathetic," he told Newsweek at a hemp convention in Portland earlier this month. "It's the first plant on earth that can feed you, house you, clothe you and heal you."

That may be true - grown for millennia, hemp's uses as fiber and even building materials are apparently endless - but the hemp industry now finds itself completely overshadowed by its sexier cousin: marijuana. Legal pot in four states and the District of Columbia has resulted in a groundswell of attention and cash for a booming new industry, but the much more useful crop that was banned by the same federal law that halted legal marijuana in Oregon isn't reaping much benefit.

"There's no media attention about it," says Courtney Moran, a Portland, Ore., attorney who represents industrial hemp growers. Marijuana legalization "is raising awareness, but not really where we want to go with it. Industrial hemp doesn't get you high, it makes you sensible products. So maybe it's not as sexy a news piece."

The public still has trouble distinguishing between hemp and marijuana, both painted with the same brush by "reefer madness" scare tactics from the early 1900s that failed to differentiate between one form of cannabis that gets people high and another form that doesn't. Hemp farming is bumping along slowly - in Oregon, 11 brand-new licensees planted five viable crops (others were spoiled thanks to infiltration from nearby pot farms and other issues) and this year the number of farmers has surged to 43. But the industry could be much bigger, Moran says. She filed a petition with the U.S. Drug Enforcement Agency just last week to declassify hemp as a federally banned "schedule 1" substance, thanks to the minuscule presence of THC in hemp.

There's also tension between hemp and marijuana farmers, says Josh Taylor, who organized the hemp convention. Marijuana farmers worried that hemp plants will produce seeds that infiltrate their own crops have burned down the stalks, he said, which has led to "buffer zones" in states like Colorado.

A lot of people come to events like this just looking to get high," said Ben Christensen, who makes soap, lotion and massage oil out of hemp for his six-year-old business Oregon Hempworks. The company now sells products in 10 stores across the country, he said, and people are slowly learning that "this is not just some niche market for hippies. Everyone is asking for the stuff now." But still, Christensen often finds himself explaining the difference between hemp and marijuana. "I can't wait for the headlines to stop saying 'High Hopes for Hemp,'" he says. 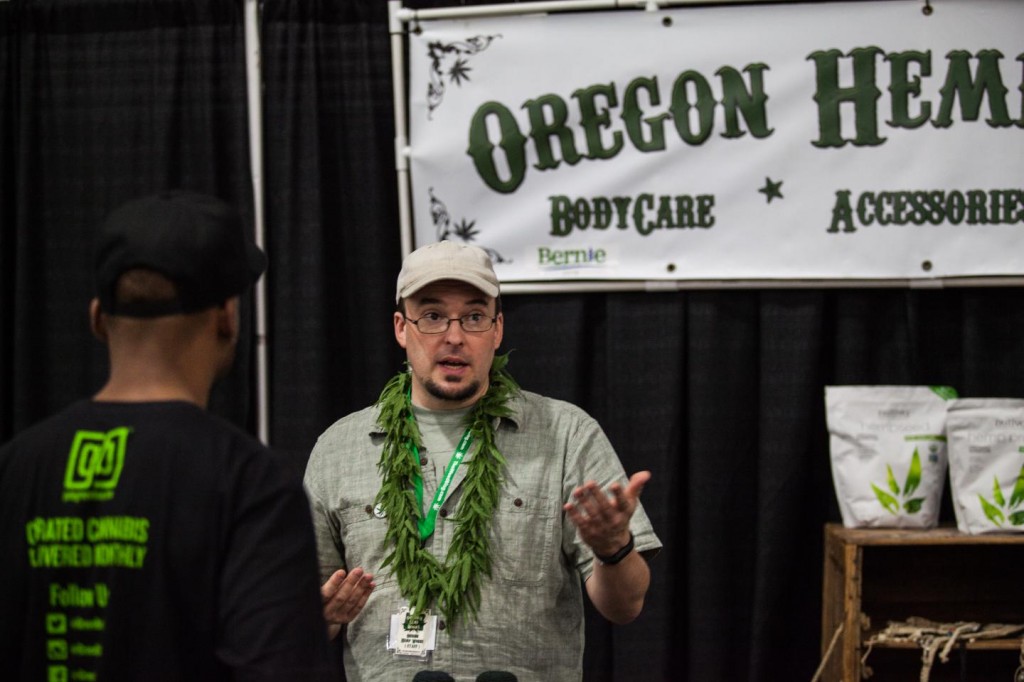