Canada: Cannabis Cruising - Five Weed-Friendly Places To Get Stoned In The Big Smoke

If The Man's plan becomes reality next summer, recreational pot use will really only be legal for homeowners. The province has already said that public consumption of the soon-to-be-legal plant will be banned. Where will we smoke in the Big Smoke?

In September, Toronto's Municipal Licensing and Standards Committee voted 4-1 to ban cannabis-friendly businesses. Scarborough-area Councilor Glenn De Baeremaeker was particularly flip. "If you want to smoke marijuana, smoke it in the privacy of your own house."

But what about people who don't own their home, live in a condo or a non-smoking building? What about parents who need a place to light up away from the kids? Or the inevitable tourists who will come to Toronto looking for safe places to smoke legal grass?

The good news is that this situation has a built-in solution: there are many lounges and cannabis-friendly businesses already operating that allow customers to consume weed. Whether they double as a comedy club, head shop or yoga studio, they each have their niche and take pride in serving the community in more ways than one. They do have some things in common, like ID-ing and prohibiting tobacco use, alcohol use and cannabis sales. They even go a step further and facilitate their customers' weed needs through education and the use of harm-reducing vaporizers and accessories. All the city has to do is let them be.

Baptiste will proudly tell you proceeds from many events at Vapor Central go straight to local women's shelters and other causes. They also host a food drive every Christmas; with an average of 100 customers a day, it makes an impact.

"As far as rules governing cannabis dispensaries, vapor lounges, etc., while it's ultimately a municipal and provincial issue," says Erskine-Smith, "I don't see any problem with such facilities where they have buy-in from the local community, they are applying rules to protect kids, and they are not causing any problems in the surrounding area."

Special rules Only vaporizing is allowed in the lounge area; smoking joints is restricted to the outdoor "potio"

The Hotbox has knowledgeable, friendly staff to answer any questions you may have and a range of events, including Nintendo competitions, live music and comedy shows. Board games, refreshments, books and art materials are also on offer. Highly recommended: a game of pool or chess.

Owner and long-time cannabis activist Abi Roach, who spoke at the Municipal Licensing and Standards committee last month, isn't nervous about the future — she believes councilors are actually beginning to come around on weed lounges. She may be right.

On October 2, Ward 20 Councilor Joe Cressy was able to push a motion through the Board of Health to re-open the issue of cannabis lounges, albeit through a back door. The motion requests that the city's Medical Officer of Health report to council "on the public health implications of places of consumption (i.e., cannabis lounges)" before council makes its final decision on the matter. That's a step in the right direction for a council that was adamantly against cannabis-friendly businesses a few weeks ago.

Offering a full menu and a variety of snacks and drinks (think Yoo-hoo and Peach Crush), Planet ensures your first trip will be out of this world. Walk into the single-level high-ceilinged space and appreciate the kitschy artwork above the deep banquettes.

With six "hemployees" on staff, Planet Paradise provides a haven for seasoned smokers while emphasizing education for newbies on the different methods of consuming cannabis. People who want to learn more about cannabis concentrates and dabbing can do so here with the proper accessories.

Crowd 30 and older, some tourists

Owner Joanne Baker is adamant about putting comedy at the forefront of her business and keeps a fresh lineup of big names coming through her doors.

Baker is concerned about De Baeremaeker's "just smoke at home" stance. "Many of my customers get a babysitter and come here because their kids are at an age of curiosity, so [parents] don't want cannabis use in the house," says Baker.

She's well respected in the neighborhood and says cops don't bat an eye when they walk by her place any more. After operating in Riverdale for 11 years, Baker is proud to say that there has never once been an incident at the Underground. "Not one cop or ambulance has ever been called. Not one time."

How many bars in Toronto can say that?

Crowd Ready for the ultimate shavasana

Special rules Bring your own bud for the class offering; be quiet and respectful

Before students at this airy space get down to downward dog, they can take cannabis-infused tea or puff on cannabis using a top-of-the-line vaporizer that creates an environment with nearly no haze or smell.

Students are asked to donate sativa or more uplifting strains of cannabis for a communal puff before class to help stimulate focus and energy. Heavier Indica-dominant strains are consumed to cool down at the end.

Ganja Yoga student Antuanette-Gomez says she got hooked after her first class — but not to the cannabis she was already used to consuming. "The atmosphere was so welcoming," she says.

Other ganja yogis concur, adding that a few puffs before practicing the ancient exercise can really help eliminate any mental hang-ups about relaxing and exercising in a public space.

Owner Lu Pancini has been teaching yoga for 12 years and tells NOW she is proud of her family-run business, which also offers Thai Yoga Massage, Thai Massage School and Yoga School.

Ganja Yoga, she says, "has been the gateway to fitness for many people." 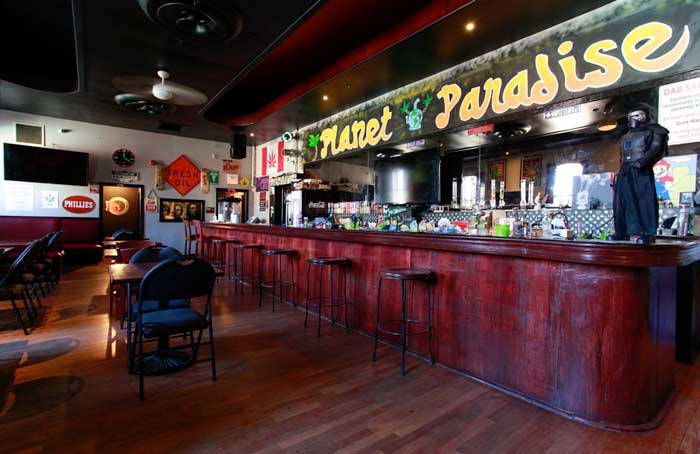 Toronto Cannabis Lounges, Operating For 18 Years, Ask For The Right To Exist Legally

Marijuana Smoking Lounges Could Be Next In Oregon

Cannabis & Yoga Retreats This Fall In The Colorado Rockies

K
OR: Cannabis Shop Starts The Day With Yoga