So, the long-time non-smokers' rights activist says he doesn't have much faith in the government's ability to regulate and restrict the marketing of marijuana.

"They identified tobacco products as a cause of disease back in the 1950s," said Mahood, president of the Campaign for Justice on Tobacco Fraud. "They've never been able to bring this epidemic close to a conclusion.

"What would give you faith that health departments are going to effectively regulate any health problems related to these other drugs?"

As the Liberal government prepares to introduce legislation to "legalize, regulate and restrict access to marijuana" before this summer, one area that the cannabis industry and public health advocates are closely watching is whether it will allow companies to brand and promote their products.

A task force appointed by the federal government recommended it require plain packaging and a limit to advertising similar to the restrictions on tobacco. But licensed producers of medical marijuana argue that cannabis isn't as dangerous as tobacco and that branding and marketing are necessary to attract consumers from the black market to the legal industry.

Mahood began advocating for plain packaging on tobacco in the mid-1980s. Governments over the years declined to implement it until 2016, when Health Minister Jane Philpott vowed to ban branding on cigarette boxes and a bill was introduced in the Senate.

The aim is to strip the industry's ability to attach "sophistication and allure" to its products, said Mahood, and to prevent it from detracting from public-health warnings.

While there is a lot that researchers still don't know about marijuana, it's not a benign substance and there are health risks, said Rebecca Jesseman, a senior policy adviser at the Canadian Centre on Substance Abuse, which supports plain packaging.

The inhalation of any hot vapour into the lungs is harmful and can lead to cancer, while edible products have been linked to over-consumption and increased emergency room visits in Colorado and Washington, where marijuana is legal, she said.

"It's much easier to be more restrictive from the outset and then loosen the restrictions as you learn, than it is to start out with looser regulations and try to make them more stringent," she said.

Cam Battley, senior vice-president of communications at Aurora Cannabis, said he would never call a psychoactive substance completely benign. But he said marijuana is more benign than alcohol or tobacco.

"There are millions of Canadians who purchase cannabis. What the federal government is trying to do is get people to switch over from the illegal and unregulated market to the regulated market," he said.

"If they want to do that, it makes sense to allow us to state who we are, to establish our brands, to justify why it makes sense for consumers to go through the legal system instead of going to somebody they know in the neighbourhood."

In terms of advertising, Battley said he believes that cannabis should be treated essentially the same as liquor, a sector where companies cannot show people using the product in commercials or target underage individuals.

The federal task force recommended that plain marijuana packaging be allowed to include the company name, strain name, price, amounts of psychoactive ingredients and warnings.

But that information isn't enough to ensure people can buy the product they want, said Mark Zekulin, president of Tweed, a subsidiary of Canopy Growth, the largest of Canada's publicly traded marijuana companies.

You're not going to buy my product if you don't know it exists
A ban on branding and advertising could create a more level playing field between large licensed producers and smaller "craft" growers, said Lindsay Meredith, a marketing professor at Simon Fraser University's Beedie School of Business in Vancouver.

But Meredith said it would be a problem for the federal government if it allows marketing of liquor but not cannabis. The argument that producers need branded packaging and advertising in order to lure users from the illegal market has some merit, he added.

"You're not going to buy my product if you don't know it exists," he said.

"The whole idea of branding, developed hundreds of years ago, was because 10 of us made a product. Nine of us did a lousy job making it. One guy did a good job making it. People who were using the product wanted to know which guy was doing it." 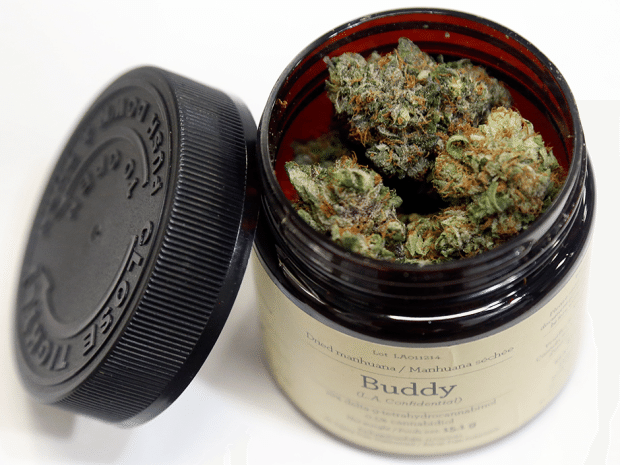