Canada: Grandmother Throws Out 'All Of Her Pills' And Says Cannabis Is The Key

Ever sat and wondered what the secret to a long and healthy life is?

Well wonder no more, because one grandmother reckons that she has the answer... cannabis.

Yes, Carol Francey, 70, said she has been smoking weed for five decades and 'feels as fit as a fiddle'.

In fact, she loves the plant so much, she made the decision to throw away all of her medication, and grow cannabis in her garden instead.

Carol, who openly allowed her son to smoke the drug as a teenager, is an active member of the group Grannies for Green which campaigned for marijuana legalization in Canada.

She claims the turning point in her life was when her son Jovian, then 17, was caught smoking weed at school.

She then decided to actively campaign for a change in the law to make cannabis use legal — which will take place in July 2018 — and has enjoyed health benefits as a result.

I'll bake cookies in the morning, enjoy a tincture-infused coffee then take my dog Bill for a walk near the river.

'I cook with and smoke cannabis. Tinctures, vaporizers, dabs, capsules and edible butters all have their place in our house.

'I grow a grandma-sized garden in a little eight by three foot closet. Growing saves my husband and I thousands of dollars each year.

'Sometimes on the way home, I'll stop at a cafÃ© and play scrabble.

'I'll then try to squeeze in an hour of accordion practice so I can then play at protests or cannabis festivals. I might do some yoga for sciatica and set up the art studio to paint beside my growing cannabis plants.

'My grandson, Eli Francey, 7, will be dropped off by his mom a couple of times a week to make cookies, go for walks and play Minecraft. Lately he has been decorating the house for Christmas.

'He is just seven so it's too early to explain when he doesn't see or hear about cannabis and is not part of his home life.

'He may never show any interest in it as his parents just brew beer. I would not use cannabis with a teen until age 19.

'My "Coming Out of the Closet Cannabis Club" meets in a coffee shop to welcome newly emerged cannabis users to chat, share resources and support health and social change.'

Carol says she'll never settle into a stereotypical granny role and believes cannabis has helped her in many aspects of life, including health.

When Jovian was caught smoking the drug, Carol and her husband, Robert Standquist, decided to 'come out of the closet' about their own use of cannabis and campaign for its legalization.

Carol decided to take the extreme step to go against medical advice and threw away her tablets, exchanging them for cannabis-use in different forms.

Carol said: 'I threw away all my pills [after that]. They had slurred my speech and affected my balance.

'Now [I have] a little Rick Simpson concentrated oil which relaxes, soothes, repairs and prevents illnesses.

'A hot coffee with a toasty cannabis tincture works well for arthritis, pain and sleep. [I'll inhale] a dab for sciatica and I'm after that I can walk. I'm eating healthy foods, walking daily, doing yoga, a little meditation and writing too.'

Terrified it would damage her reputation as an adviser on drugs and alcohol misuse, Carol kept the habit to herself for decades.

She is now hoping others can be more open about using cannabis and is hopeful for the future after her country decided to legalize it.

Carol said: 'We need to help older people have a better quality of life and give their families the confidence that their care is compassionate and healthy.

'Cannabis helps you to overcome anxiety about day-to-day life and stop sweating the small stuff.' 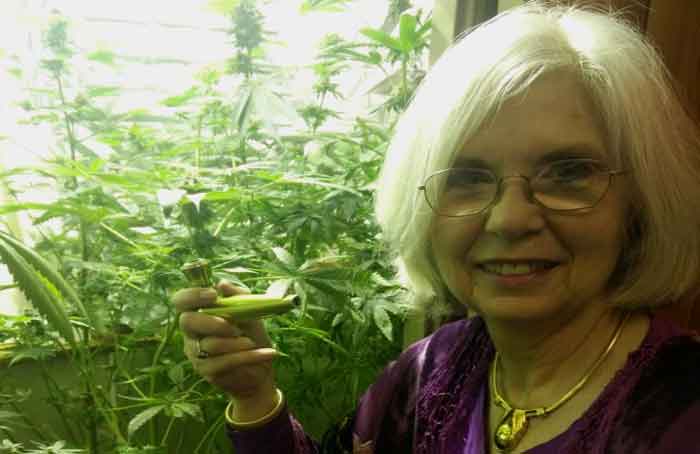 News Moderator: Ron Strider 420 MAGAZINE ®
Full Article: Grandmother throws out 'all her pills' and says cannabis is the key | Metro News
Author: Georgia Diebelius
Contact: Contact us: How to get in touch with us at Metro newspaper and Metro.co.uk | Metro News
Photo Credit: Mercury
Website: Metro.co.uk: News, Sport, Showbiz, Celebrities from Metro