Canada - Inside A Pot Plant: Touring A Medical Marijuana Grow-Op

The 55,000-square-foot warehouse in Markham is unremarkable from the outside unless you stand at the doorstep, take a deep breath and notice a faint but recognizable smell. On Wednesday, MedReLeaf began its first harvest of medical marijuana and invited a Metro reporter for a tour. Metro has agreed to keep the exact location of the medical marijuana production facility a secret to protect the people who work there and the thousands of plants inside. The company is one of 20 marijuana producers licensed by Health Canada so far under the new regime, which began April 1, and saw medical pot production switch from numerous small growers to fewer, larger, more heavily regulated companies like MedReLeaf.

The Tour:
Inside MedReLeaf's pot plant, workers and guests at are constantly monitored on video surveillance, mandated by Health Canada. The internal doors between growing rooms are secured with electronic locks. Before seeing any marijuana, our small group, which includes MedReLeaf COO Tom Flow, head of quality assurance Angelo Fefekos and communications staff, enters a decontamination room, puts on white clean-room suits, hair nets, gloves and booties, and passes through an airlock.

That level of contamination control is not mandatory, but MedReLeaf trademarked their marijuana as "medical grade standard" pot, so the procedures are in line with those at pharmaceutical facilities that make traditional medical drugs. Everything from the flooring to the HVAC is engineered to keep things hygienic and the plant meets the ISO class 8 standard, like an operating room, according to Fefekos, whose previous job was manager of Diagnostic Medical Genetics at Mount Sinai Hospital in Toronto. He was recruited by MedLeaf CEO Neil Closner, who was then vice-president of Business Development at the hospital. Initially skeptical, Fefekos helped Closner prepare the application for a licence and was convinced to come on board because of how seriously the government was taking–and regulating–the pot business, he said.

The 'Mother Room'
After the airlock, we enter the "mother room," where there are rows of pot plants under 1,000 watt bluish lights. They are the 23 strains of pot the company is currently producing. Some are varieties Canadian consumers are familiar with and have words like "kush" and "skunk" in their growing names. Others have come from the Tikun Olam company of Israel, which has been growing medical marijuana for about a decade. A signature strain–Avidekel–is high in cannabidiol (CDB), a non-psychoactive anti-inflammatory, but very low in tetrahydrocannabinol (THC), the chemical that gets you high.

Others strains have high THC and CBD, others are in between. Breeders work from seeds and cross-breed new varieties. Clipping from the mother plants, called clones, are transferred to trays kept in a high-humidity "clone room" where they grow roots over seven to 14 days. Next they're transferred to one of the "flower rooms," where 2,000 to 6,000 plants grow under red spectrum light, are fed a nutrient solution pumped in from an irrigation system, and trimmed by the head grower and his team.

The Markham pot plant itself is still growing, but according to MedReLeaf, they'll soon have 10 flower rooms and grow about 150,000 pot plants without pesticide. Some are a deep purple, others are a light green. All have large buds and shimmering crystals of THC. It's time to harvest when the pot leaves yellow and fall and the hairs on the buds go red.

When they're ready, the plants go to the trimming room. Everything that goes in and out is weighed so nothing goes missing. The air quality in the trimming room is tested by an air particle counter–dubbed by employees as R2D2–and employees' gloved hands are tested for contaminates. Health Canada will spot test the end product, but doesn't mandate mid-stage tests like these. "It's the only way I know how to make a medicine," explained Fefekos.

Employees pick off the leaves and trim the buds with scissors before they're hanged over metal wire to dry in the drying room, where, on the first day of harvest, a Bob Marley song is playing. The first day of the first harvest was a big deal for some of the employees. Facilities manager Ori Sher said he never expected to find himself doing this. "I was in the IT business for years," he said. "This is pretty far from IT." When the buds are dry, they'll be tested and either quarantined or released by Health Canada. All the pot that's good to go will be vacuum sealed, picked up by Canada Post and mailed to patients in unmarked packages. Any pot that's stored is kept in the vault – a huge black safe – with two complex locks. The safe is kept behind a giant blue cage, which is also locked and secured with an alarm.

Becoming Big Business
Even though it has yet to ship any pot to a patient, the executives at MedReleaf see a big future for medical cannabis. "We can service well over 10,000 patients from this building and we're already looking at expanding to other facilities," said CEO Neil Closner. "We believe it could be quite a big market for those producers who can produce at a level that not only patients want, but physicians feel comfortable prescribing."

According to the government, 920 companies have applied to become producers so far. Of those, 20 have been approved, 407 were returned as incomplete, 163 were refused, 34 were withdrawn by the applicant and 296 are currently being reviewed. Some companies have elected to raise funds from the market. So many penny stocks posted big gains just by announcing there were planning to get in on the medical marijuana market that the Canadian Securities Administrators issued a warning.

"There's clearly a bit of a mania going on, a bubble going on with people rushing to invest in gold-mining companies that all of a sudden add 'marijuana' to their business name and all of a sudden the stock goes up by tenfold in one day," said Closner. MedReLeaf elected to go with private investors who pitched in significant capital to build the company–including its large, high-tech pot plant in Markham–because they believe in the product and the investment. In part, that's because of Canadian law. While the new medical pot business is highly regulated, doctors can prescribe marijuana for any patient they feel needs it and where other countries that allow medical pot–such as Israel–allow prescriptions for only a list of ailments, said Closner.

MedReLeaf expects to ship its first harvest in a few weeks. "Today's a big deal because after 18 months or so of planning and filing applications and regulatory paperwork with Health Canada and building our facility, today we're doing our the harvest of our first crop of medical cannabis," Closner said. 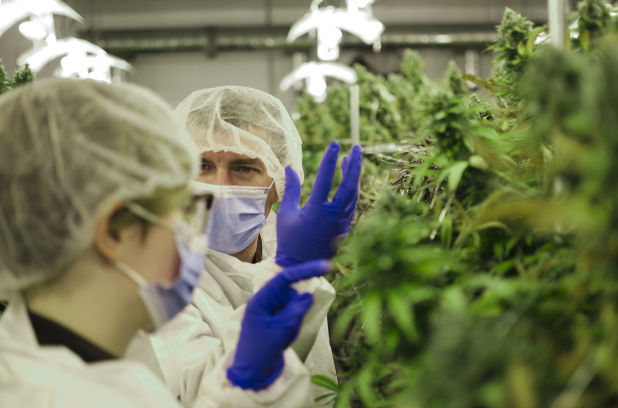 That level of security and cleanliness is impressive. :headbang:
420 Contests
Everything You Need To Grow Cannabis
Forum How-To Guides For Beginners

One Of The World's Largest Marijuana IPOs Is A Bust