An Alberta mother whose daughter has severe epilepsy has travelled to Ontario for a medical marijuana prescription after the girl’s doctor said he was no longer allowed to provide permission to purchase the product.

In 2013, Sandra Wilkinson had started extracting cannabis oil from dried marijuana — purchased from a licensed grower with a prescription from a neurologist at Alberta Children’s Hospital in Calgary — to prevent life-threatening seizures in her eight-year-old daughter Mia.

But in July, the physician declined to renew the prescription because of a hospital policy based on the position of Alberta Health Services, the provincial health authority, which does not support the use of medical marijuana for pediatric patients with epilepsy.

Wilkinson said the cannabis oil is the only therapy that has worked to stop Mia’s seizures, caused by a rare type of epilepsy called Ohtahara syndrome.

Despite taking 30 to 40 anti-convulsive pills daily, Mia would suffer up to 100 seizures a day, said her mother. But since starting daily doses of oral cannabis oil 19 months ago, she has not had a single seizure.

On Monday, Mia was seen by a doctor at the Canadian Cannabis Clinic in St. Catharines, Ont., and left with a prescription for dried marijuana, which her mother can fill from a federally licensed producer after returning to their Airdrie, Alta., home.

“It’s a big relief. I don’t have to worry about when I run out of her meds,” said her mother, who had been worried about her dwindling supply of medical-grade marijuana purchased with the initial prescription.

Wilkinson said she turned to cannabis because nothing else was helping her child, whose seizures could be so severe she would stop breathing and have to be resuscitated and rushed to hospital.

“I really took a big leap of faith with that,” she said of the cannabis oil, adding that within 24 hours of the first dose, Mia’s seizures had completely stopped.

Without the treatment, “we would have waited for the next big seizure and she would have died. There’s not a really nice way to say that.

For Mia, tetrahydrocannabinol, or THC, appears to be the ingredient in marijuana that controls her seizures, while others with different forms of epilepsy benefit from another component of the plant called cannabidiol, or CBD.

In August an Edmonton-area family went to court after Alberta’s Child and Family Services applied for a supervision order that would have forced a four-year-old to stop using CBD and go back on prescribed medications. The province later dropped its application, allowing Lita Pawliw to continue to treat her daughter’s epilepsy with the marijuana derivative.

Pharmacologist-toxicologist McIntyre Burnham, co-director of the Epilepsy Research Program of the Ontario Brain Institute in Toronto, said about 30 per cent of people with seizures don’t respond to any anti-convulsive medications.

His program plans to seek Health Canada approval for a clinical trial in adults of a cannabidiol in capsule form being developed by Canadian medical marijuana producer Tilray, which he hopes will start in about a year.

While THC does stop seizures in some people, it’s also the active ingredient in marijuana that “makes you high,” said Burnham, whereas CBD does not.

Researchers agree clinical trials are needed to determine if the various strains and extracts of marijuana can benefit patients with a variety of conditions, and cannabidiol appears “quite promising” for epilepsy, he said.

But “people are thinking it’s a wonder drug. I think it’s too early to say that … It’s not going to be for everyone. It will help some people and not help others.”

Kunvar Mudhar does believe CBD is a wonder drug.

A year ago, she started giving cannabis oil high in CBD to her son Zen, who has intractable epilepsy related to cerebral palsy that is resistant to all anti-convulsive medications.

As a baby, he had been put on a special diet, which reduced the number and severity of his seizures — but he was still experiencing about 150 a day.

“The first night I gave him the first dose, we started off very low,” said Mudhar of Mississauga, Ont., who makes cannabis oil from dried marijuana purchased through a doctor’s prescription.

Within a day, the number of Zen’s seizures dropped to about 30, and with a slight increase in the dose, they disappeared for months.

Mudhar had been treating Zen, now 7, with an oil high in CBD and low in THC, but she also had on hand an oil extract she’d prepared with a two-to-one ratio of CBD to THC.

One night in February, her son suffered a grand mal seizure, despite the daily cannabis therapy.

“His body was jerking. He started to turn grey-blue,” she said. “At that point, I had nothing else to give him. I had already called the paramedics and was waiting for them to come.

Mudhar said she would have been happy if the cannabis oil had just reduced his seizures by a significant amount.

“But this is amazing. To me, this is more than a miracle that Zen has seizure-free days.” 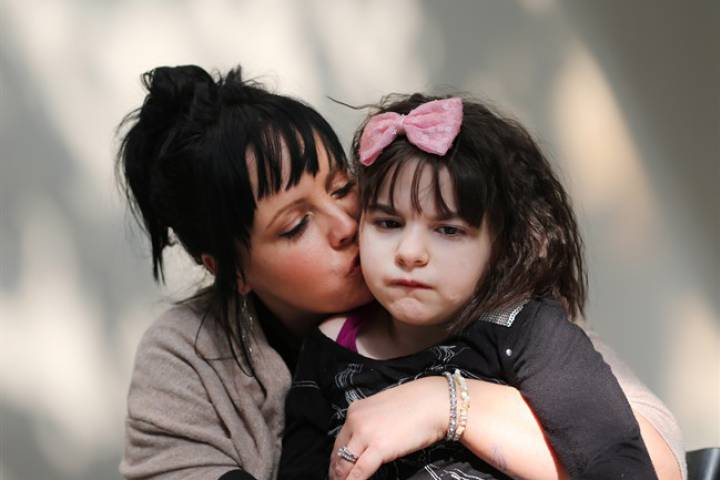