Liberal MPs will soon be getting some interesting and fragrant mail.

Pot activist and former B.C. NDP leadership candidate Dana Larsen is sending a special package to the 184 politicians. The manila envelope contains his and illustrator Patrick Dowers' new book Cannabis in Canada, the Illustrated History – as well as a gram (approx. $12-$15 worth) of medical-grade marijuana.

"It's not legal to mail people weed ... but most of Canada's marijuana laws are made to be broken, so that's just another one," said Larsen who added he is not worried about any legal backlash for the 6.5 ounces that will be sent out.

This isn't Larsen's first time sending pot to politicians. In 2014 he sent B.C. Premier Christy Clark a half ounce to point out the taxes that could be generated by pot and to also suggest it could be used as a way to bring together the government and the B.C. Teachers Federation whose members had been on strike for months.

This time out, the pot is value-added to a 132-page book that takes readers on a journey from our country's first cannabis crop back in 1606 to the current day and the fluid world of medical marijuana.

"I don't think the story has been told before," said Larsen who was a founding member of the B.C. Marijuana party and the co-founder of the Vancouver Dispensary Society and Vancouver Seed Bank.

"We mostly get a lot of American information. So we know that George Washington grew cannabis and stuff like that, but the Canadian story has not really been told."

The book retails for $9.95. You can get your copy from cannabishistory.ca or check out your favourite hemp or head shop.

As for the packages to politicians, Larsen says he has yet to hear back from any MPs.

"No one has called me and said, 'Thanks for the book and the gram,'" said Larsen, who has been working on the book for 20 years.

"I'd be surprised if too many MPs smoke it themselves, but you never know. Probably someone on their staff will get to enjoy it. It will get them talking about the issue, which is important." 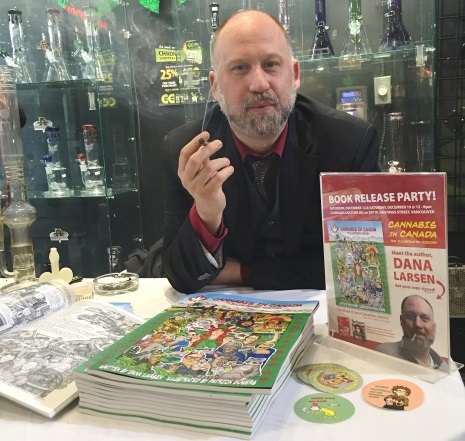