The main groups representing Canadian doctors have declared they will not participate in Health Canada's upcoming anti-drug campaign targeting young people. "The educational campaign has now become a political football on Canada's marijuana policy," said a joint statement released Saturday by the College of Family Physicians of Canada (CFPC), Canadian Medical Association (CMA) and Royal College of Physicians and Surgeons of Canada. "We did not, and do not, support or endorse any political messaging or political advertising on this issue."

The release said all three organizations had been "invited to co-brand and provide expert advice" on the public campaign, initiated and funded by Health Canada. This would mean the groups would have their logos along with endorsements emblazoned on all the advertising. They emphasized, however, that they will "continue working to enhance public education and increase awareness of the health risks of drug and alcohol consumption by Canada's young people." Stephen Harper's Conservative government has come out hard against the stand taken on marijuana by Liberal Leader Justin Trudeau, who has said he favours legalizing and controlling the drug.

Attack ads
Earlier this week, the Conservative Party released an ad indicating that Trudeau's stance would make it easier for children to get marijuana. Retired police officer Julian Fantino, the Conservative minister of veterans affairs, recently distributed a flyer in his Toronto-area riding attacking Trudeau. Fantino's flyer said the Liberal leader's "first order of business is to make marijuana more accessible to minors," and that the Liberals "want to make buying marijuana a normal, everyday activity for young Canadians." Trudeau has said that marijuana should be regulated and taxed similar to liquor sales. When asked to clarify what he thought about marijuana, Trudeau has said, "Marijuana is not a health food supplement. It's not great for you, but it's certainly – as many studies have shown – not worse for you than cigarettes or alcohol." 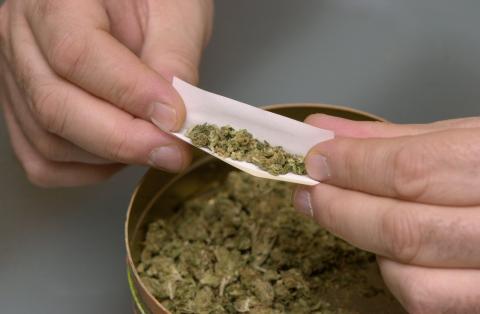