Cannabis And Concussions: The NFL Needs To Listen

This Bud's for you. But not that bud. That's the message from the NFL, which continues to stonewall efforts to make medical marijuana legal for its players while swimming in beer sponsorship money.

It's OK to drink yourself silly, fellas. And pop pills to your heart's content. But don't mess with the reefer.

The issue came into sharp focus again this week, after a major study on brain damage among former football players was released. The report showed that a vast majority of the brains of deceased players that were studied showed signs of chronic traumatic encephalopathy, a degenerative condition linked to head trauma. To be exact, 110 of the 111 NFL players whose brains were studied suffered from the disease.

The study made national headlines, and the NFL released a feeble statement saying "there are still many unanswered questions." But few wrote about a possible solution: cannabis.

A nonprofit group of former players and doctors calling itself Doctors for Cannabis Regulation (DFCR) has been actively lobbying the NFL to change its rules on the drug. Currently, it's against league policy for players to use any form of marijuana.

The DFCR, which counts former stars including Kyle Turley, Jim McMahon and Ricky Williams among its ranks, is trying to convince the league of two things:

1. Cannabis is a safer form of pain relief than the currently pervasive use of opioids.

2. Cannabis can help prevent brain damage, as well as treat the condition.

(For what it's worth, many modern cannabis treatments have nothing to do with getting high. The medicines can be administered with no hallucinatory effects.)

You'd think the league would want to talk about this sort of thing. But it's been a series of denials, refusals and indifference from the NFL.

For a column I wrote about the league's pain management policies last year, an NFL spokesman sent me this statement:

"Independent medical advisors to the league and the National Football League Players Association are constantly reviewing and relying on the most current research and scientific data. ... However, these medical experts have not recommended making a change or revisiting our collectively-bargained policy and approach related to marijuana, and our position on its use remains consistent with federal law and workplace policies across the country."

But Doctors For Cannabis Reform had plenty to say. Dr. Suzanne Sisley, a member of DFCR's board and president of the Scottsdale Research Institute, a nonprofit that uses clinical trials to look at the safety and efficacy of cannabis, has been knocking on the NFL's door, research in hand.

"There is some early data that cannabis does play a role in neuroprotection. This is the kind of science we've put in front of the NFL, hoping they would reconsider their antiquated policies," Dr. Sisley told The Chronicle. "The bottom line is that cannabinoids are clearly neuroprotective. We have preclinical data at the receptor level that cannabinoids and cannabis are not only involved with brain repair but neurogenesis, the development of new neural tissue. It's one of the most exciting discoveries of modern neuroscience."

That sounds promising, no? Why would the NFL ignore such wonderful news? This could be a solution to the league's biggest long-term threat.

The answer could lie in the Bud versus bud thing.

"They're perfectly fine with athletes drinking excessively and using opioids excessively. But when it comes to cannabis, they're not willing to look at perfectly sound data that confirms cannabis is involved in neuroprotection and brain repair," said Dr. Sisley. "I think it speaks to the stigma around the word cannabis. The word is so politically radioactive. They're worried about alienating their existing sponsors.

"The alcohol sponsors fund so much of this league. In states that have adult use of cannabis, the alcohol industry is seeing sales going down. They see it as a threat to their business model. It could be as simple as that."

If that's the case, then shame on you, Roger Goodell. America's favorite sport has enough problems, ranging from domestic violence to drug abuse to long-term crippling health problems.

The league should show some backbone, and compassion, and accept cannabis as an ally, sponsors be damned.

Do the right thing, Commissioner. 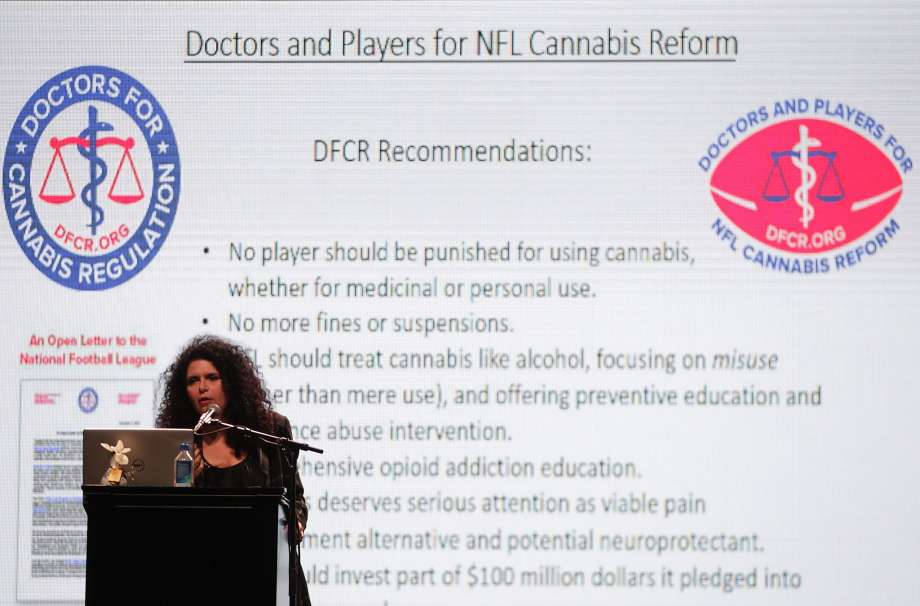 FWIW, NOBODY hallucinates from using cannabis. It's a euphoria inducing plant, it does not cause people to TRIP. I wish people would get this straight!! It simply promotes further confusion, that envelopes this healing and powerful plant! I learned that distinction back in the 70's, and even with the increased potency of today's strains, I still didn't even get close to 'trippin', but I did get close to a nap and a pizza.
G

Also:
"Independent medical advisors to the league and the National Football League Players Association are constantly reviewing and relying on the most current research and scientific data. ... However, these medical experts have not recommended making a change or revisiting our collectively-bargained policy and approach related to marijuana, and our position on its use remains consistent with federal law and workplace policies across the country.”
This is so much crap. Big Pharma is not going to give up the deep pockets of the NFL without shelling out a liberal amount of that lobbying money that they have been delivering via enema, to the league, Congress, and far too many television news stations and networks out there to keep their cash cow flowing.