Colorado - If recreational marijuana wasn't legal, Rick Smith would not be on holiday this week in Breckenridge. "It's 90 percent of the reason I'm here," said the 36-year-old Jacksonville, Fla., resident who plans to vote for the legalization of medical marijuana in his home state in November. In addition to ziplining and rafting during his vacation with family and friends in a Breckenridge condo, Smith visited the Breckenridge Cannabis Club on Main Street, picking up some marijuana and THC-infused mints and candies as well as a Colorado pot leaf sticker for his truck back home. "This is the new generation," he said.

The Breckenridge Town Council in September last year banned marijuana stores in downtown, including along its historic Main Street, where T-shirt shops, bars, restaurants and boutiques occupy century-old buildings along Summit County's most picturesque, pedestrian-friendly avenue. The vote allowed the second-floor Cannabis Club to remain on Main Street until its lease expires on Sept. 1. Club owners Caitlin McGuire and Brian Rogers are asking the town council on Tuesday night to suspend the rule, noting their five years on Main Street without any trouble.

The pair paid high-dollar, Main Street-rent as a medical marijuana dispensary for four years before the legalization of recreational marijuana on Jan. 1, which has been, to say the least, a boon to business. "At the beginning it maybe didn't make a lot of sense," McGuire said. "It was very expensive to be in downtown and only cater to a local market. We were hoping and planning that one day in the future the state would pass recreational laws." Opponents argue that downtown marijuana could damage Breckenridge's vibe and potentially hinder tourism.

But 2013 was a record year for tourism in Breckenridge and the town's retail and lodging sales tax collections are pacing well ahead of last year. Through April this year, Breckenridge's four pot shops have generated $3.4 million in sales, including more than $1 million in March. The town's cannabis sales are pacing more than 300 percent ahead of last year, thanks to the statewide legalization of recreational marijuana sales and consumption.

Summit County residents voted 69.2 percent in favor of legalizing recreational weed in 2012, mirroring a 2009 Breckenridge vote that legalized possession of small amounts of marijuana. A recent Colorado study of the state's nascent recreational cannabis market showed that 90 percent of sales in mountain communities were to out-of-town visitors, making marijuana a tourist draw. It certainly seems a tourist attraction in Breckenridge, where a steady stream of visitors from out-of-state on Monday lounged near a sculpture of entwined donkeys adjacent to the upstairs dispensary, waiting for friends and family to finish their shopping. Most declined to speak on record.

McGuire said many of her customers are from out-of-state and they ask lots of questions. She said her shop provides an educational service to visitors who have never been to a retail pot store. "I think one of the things that makes Breckenridge so unique and so special is the sort of messy vitality that we do have," said Town Councilman Ben Brewer, a Breckenridge native and local real estate broker who remembers a few years ago when locals revolted against ground-floor real estate shops on Main Street. "That can be scary when public opinion swings against your livelihood." Brewer, who supports strict regulation of marijuana sales on par with the town's liquor enforcement but is wary of kicking out longstanding retailers, recently sat outside the Cannabis Club and interviewed visitors. A couple of young parents posed with their parents for a photo beneath the club's sign.

"For them, it was a curiosity and something funny," said Brewer, who appreciates the tax revenue generated from marijuana sales – but not enough to make decisions that could hurt the rest of the retail scene in downtown. "If we can do it in a way where it doesn't change the character of our Main Street and it doesn't threaten our guests in any way ... then I'm OK with it," he said. "We have to be open to new ideas and new businesses." Brewer said a vocal contingency dislikes Main Street marijuana sales. They have e-mailed and approached him and he understands their concerns about letting marijuana take over downtown. But look at how much effort and money the town expends to regulate liquor, he said. There are several bars, a liquor store, a brewery and a distillery on Main Street. Police regularly deal with alcohol related disturbances, yet no one is advocating for the removal of alcohol sales on Main Street.

"We regulate alcohol very, very heavily," he said, noting that local police have reported no issues connected with the Cannabis Club. "We can do the same thing with marijuana." Brewer said the town council will spend the next few months having "long, involved discussions" about marijuana sales in the downtown core. On Tuesday night the council will vote on a measure that would give McGuire and Rogers an extension that would allow them to stay while the council mulls downtown pot. "It just seems inane to me to kick them out and then possibly invite them back in," Brewer said. "It's really difficult to make a case that the Cannabis Club has hurt or detracted from retail on Main Street."

McGuire said if they are forced to relocate, zoning laws would force them onto a warehouse block in the industrial district north of town. It would not be good for business, said the entrepreneur whose new grow facility south of Steamboat Springs feeds her retail stores in Breckenridge and Crested Butte. "Even though we are on Main Street, we are in a very discrete location on the second floor. I don't think our store defines Breckenridge. Breckenridge is very diverse and we offer something for everyone and I think it's super awesome we can offer something other places can't," said McGuire, who assembled a crew of supporters to speak to the council on Tuesday night. "We have a lot of support in the downtown business district." 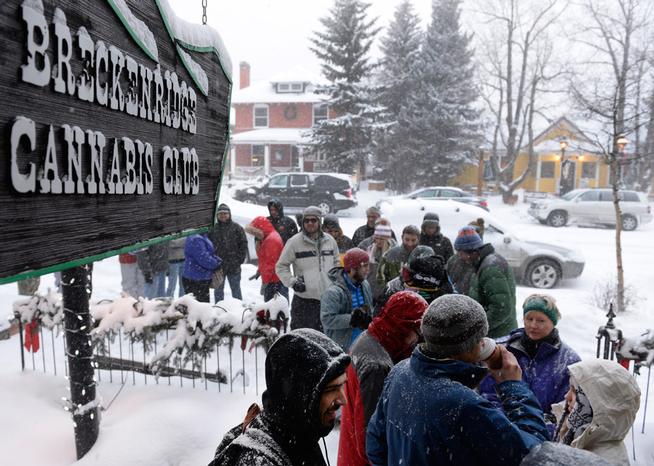