The Apple store is considered a prime example of a killer retail store - a beautifully designed space that attracts customers to come in, hang out and buy expensive products. Each Apple store, on average, makes about $4,799 per square foot, a recent report finds. But some marijuana dispensaries are catching up with, and in some cases besting, Apple. Blum, a dispensary in Oakland, California, owned by husband and wife duo Derek Peterson and Amy Almsteier (who both own public marijuana company TerraTech and marijuana brand IVXX) brings in about $7,000 per square foot, Almsteier says.

After decades of doing everything they could to keep a low profile to avoid legal scrutiny, the cannabis industry's retailers, like Blum, have started using design and retail strategies that have worked so successfully at some of the most profitable storefronts in the country, like Starbucks, Apple and Whole Foods.

Cannabis retailers have gotten so good at it (helped by a range of hot products containing THC) that the average marijuana dispensary brings in $974 per square foot, besting Whole Foods' average $930 in revenue per square foot, according to a recent report from Marijuana Business Daily. Here are some of the ways that cannabis retailers are becoming the new kings of merchandising and retail design.

When Good Chemistry, a boutique cannabis cultivator and retailer in Denver, decided to open a store in Aurora, Colorado, cofounder Matthew Huron wanted to hire a team of architects, interior designers, and brand consultants to transform an old 3,600-square foot Blockbuster into a modern and sleek recreational dispensary.

The store, with cool grey walls, wood counters and floors, and splashes of blue, green, orange and yellow, opened in 2015. The design and concept was conceived by Tony Coleman Interior Design, who helped design Panera Bread from the company's inception, brand strategist Michael Markowitz and Associates, who has worked for Anheuser-Busch, Universal Studios, and Au Bon Pain, and graphic design firm Duffy & Partners, who has helped Minute Maid, Brewery Ommegang, and Wolfgang Puck come up with their brand identities.

The result is a welcoming, bright and open layout that separates its 15 home-grown strains of cannabis into four categories of feelings with different strains under each category - relaxation, relief, sleep, and amplify. Each customer can learn about a specific strain on provided iPads, learn about its chemical makeup, its effects, and how it was grown. Huron says the fusion of design and mini-educational centers help new customers navigate the products.

"For new users, the subculture of cannabis can be intimidating," says Huron. "We want our customers to be able to evaluate the cannabis and know how to pick out strains for specific experiences. Above all else, educating the customer helps increase sales."

Huron would not reveal revenue per square foot, but says the company grew its revenue by 235 percent over the last two years. While education helps drive sales, Huron says you also need to connect customers to your brand through a narrative so they feel like they know your company.

"You tell a story with your store," says Huron. "When you walk into an Apple store, you're learning about Apple. It's not just about boosting sales with a specific layout or design. The design of our store is a window into our nurseries and tells the customer who is Good Chemistry, why we exist and why customers should come back."

Jeff Sheppard, an architect and cofounder of design firm Roth Sheppard in Denver, has designed over 50 restaurants and bars, high-end retail spaces and awarding-winning national projects, Last year, he designed his first dispensary for Ajoya in Louisville, Colorado, a company owned by brothers Joey and Shaun Gindi. Sheppard created a new type of high-end retail space, one that is not a bar, not a retail shop and not a pharmacy, but a sophisticated hybrid of each, Sheppard explains.

Sheppard says he took the job for the challenge of helping to create a new standard in an industry that lacked its own.

"There is still somewhat of a stigma that marijuana is for hippies," says Sheppard. "The concept of Ajoya was to escape that stigma and elevate the perception of a high-quality product by creating a minimalist background for it."

Ajoya's 3,000-square foot space is uncluttered and features minimalist white furniture with soft, circular angles and warm lighting. The store is futuristic and one gets the feeling that this is what a pot bar would look like in the International Space Station - a 10-foot tall rectangle with rounded edges and a counter in the middle frames the shelves packed with white boxes of products. Patrons can come up to the bar, take a seat, browse the menu, and buy cannabis products from the bud tenders at the counter.

Sheppard says he used the "psychology of lighting" and "neuro-aesthetics" in his design to make the space appealing to customers. He uses a lot of blue light spectrum, which retailers use to activate customers' minds. He also used what he calls "sensuous curvilinear shapes" like rounded edges and circles to trigger the left amygdala, a part of your brain associated with positive emotional reactions.

Sheppard says he spliced the layout and function of a restaurant bar with a dispensary to create a space that can host customers and not just function as a funnel for money in exchange for pot. He explains that people like to watch people and patrons go to bars and restaurants to be part of a community, not to spend money on expensive drinks.

"Dispensaries are part of a social scene, you just need to make space for that to happen," says Sheppard.

When asked why he thinks it took 20 years for dispensaries to pick up on the secrets of well-designed retail spaces, he says design is always the last thing a new industry embraces.

"The retail shops of the industry started by people buying tables and sticking them in a storefront and packing as many products as they could fit," says Sheppard. "But it takes years and requires competition for the design aspect of any industry to move forward. We're just seeing cannabis retailers who are aware of the need to brand their stores and products to stay competitive." 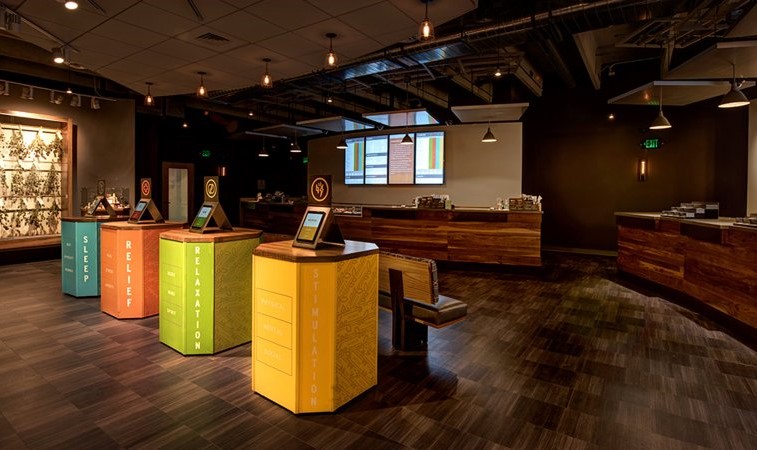