"Our preliminary findings...indicate that cannabidiol may prevent the development of paclitaxel-induced allodynia in mice and therefore be effective at preventing dose-limiting paclitaxel-induced peripheral neuropathy in humans," according to the report by Sara Jane Ward, Ph.D., and colleagues of Temple University School of Pharmacy, Philadelphia.

Paclitaxel–commonly used in the treatment of advanced breast or ovarian cancer–can cause nerve damage (neuropathy), leading to symptoms like pain, numbness, or tingling.

Cannabidiol is a marijuana extract that has pain and inflammation-reducing effects, while avoiding the psychoactive side effects of marijuana and other "cannabinoid" compounds.

In the new study, male and female mice were treated with paclitaxel and monitored for evidence of neuropathy.

The results showed that paclitaxel induced abnormal pain responses (allodynia) mainly in female mice–less so in males. Allodynia was more likely to develop at higher doses of paclitaxel.

When female mice were treated with cannabidiol before paclitaxel, it effectively prevented the development of allodynia. Abnormal pain responses to both cold and mechanical pressure were prevented by cannabidiol.

The preventive effect was permanent, with no evidence that nerve damage developed after cannabidiol treatment was stopped, the report said.

The study has been published in the journal Anesthesia and Analgesia. 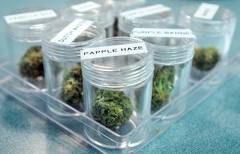