Cannabis For Animals Takes Off In California

Every July 4th, Augie, a 4-year-old Chihuahua mix, would go into freak-out mode. He trembled. He refused to eat, sleep or let anyone pick him up. His owners tried giving him Xanax for his fireworks phobia.

"He would act like your worst drunk friend at a bar who picks fights with everyone," said Liz Hughston, an emergency veterinary technician in San Jose. "He'd be running around barking at everything, then he'd pass out for an hour. Then we'd have to dose him again."

This year, Hughston gave the 8-pound dog Treatibles cannabis chews made for pets.

"He sat on the sofa and let us pet him; he ate," Hughston said. "He went through the fireworks better than he ever had before."

More and more pet owners are turning to cannabis-based products to help their animals with anxiety, arthritis, seizures, cancer and other ailments. A pioneer in the cannabis pet market is Auntie Dolores, an Oakland company that began by making edibles for people. In 2013, it launched Treatibles, blueberry- and pumpkin-flavored hemp chews shaped like dog bones that are sold in pet stores, dispensaries and online.

Unlike human edibles, the pet version has only a tiny fraction of THC, the psychoactive ingredient in cannabis, said CEO Julianna Carella. It's main ingredient is CBD, another compound - or cannabinoid - in cannabis or hemp that does not make people or animals high, but offers relief from anxiety and pain, she said.

She said she got the idea for the pet products after clients started asking whether it was OK to give their own edibles to their dogs for arthritis. It's not. Concentrated doses of THC can be toxic in animals, as evidenced by the increasing number of pets who have gotten into their owners stashes and landed in vet emergency rooms. So Carella decided to make something for animals so people wouldn't dose their pets with unsafe human products.

"We have people using it (on their pets) for separation anxiety, or when they're going to the vet or groomer," Carella said. "We've also heard from pet owners who used the product in the last weeks and months of their animal's life that they were much more comfortable and in less pain."

Under federal law, both CBD and THC are illegal, this is where things get complicated. Because CBD is also found in hemp, which can be legally imported and sold in the U.S., most companies that make pet cannabis products are taking advantage of this loophole. And those don't require customers to have a medical marijuana card.

Federal regulators haven't approved cannabis for use in animals, and have sent warning letters to producers who claim health benefits. Even in states like California that have medical and/or recreational marijuana laws, those pertain to humans, not animals. The prohibitions have stymied research. As a result, there's no science on the effectiveness of pet cookies, pills, tinctures, oils and other products.

Yet anecdotal evidence is convincing many people to give it a try anyway, particularly those with elderly or sick pets. And the passage of state Proposition 64, which legalized the recreational use of pot, is likely to have even more people running to dose their pets.

Kaity Evans, a pet sitter in Oakland, gives CBD-based treats to her dog Ziggy for his arthritis. The 11-year-old Great Dane would drag his back feet on the ground, scuffing his paw pads.

"He is actually picking up his feet when he walks and generally seems to feel better," she said. "It's definitely doing something."

"I have a younger dog and Lucius just started playing and running around with him, which I hadn't seen him do in six months," Hockenberry said.

The California Veterinary Medical Board guidelines say that prescribing or recommending any cannabis to animals is against the law, period, which means anyone who does so risks losing their license. Maureen Dorsey, a veterinarian at Oakland Veterinary Hospital, is concerned about the absence of data to support manufacturers' claims.

"In my vet community, we have online discussions that this is coming up," she said, "but we have no information about the efficacy, the dosage or the content of these products, and no one can do the research because the plant is still federally illegal."

Veterinarian Ashley McCaughan, at Creature Comfort Holistic Veterinary Center in Oakland, said she found out about cannabis tinctures - a liquid combination of THC/CBD - for pets from a client who was using it for her cat, who'd just had surgery for intestinal cancer and was on a feeding tube. McCaughan said the TreatWell tincture helped the cat's appetite, and it lived a lot longer than expected.

"The number of products has exploded but because of the legal ramifications, we can't prescribe anything with the THC CBD in it," McCaughan said.

TreatWell CEO Alison Ettel said she's aware that dogs, cats, pigs, alpacas, goats, horses and even a bearded dragon have been given the tincture by their owners. Because hemp-based products work for anxiety in pets, but aren't as effective for more serious medical conditions, the San Francisco company began marketing pet tinctures with a combination of THC and CBD to dispensaries nine months ago, she said. Unlike hemp-based products, the pet's owner needs a medical marijuana card to buy it.

"We see people coming in for palliative care (for their pets) to try to fight the cancer or reduce the tumor or for symptom relief," Ettel said. "We're seeing fantastic results with severe pain far more than CBD alone would ever be able to do."

Yet companies like TreatWell that use THC in their products are in risky legal waters, though it's a chance Ettel says she's willing to take to help seriously ill animals and their desperate owners.

Heidi Hill, owner of Holistic Hound pet store in Berkeley, sold 3,000 cannabis-based products between June 2015 and June 2016. She says the store sold 1,500 in the last five months, and in August, it created its own edible line.

"People really want to do anything they can to help their pets, and a lot of times, this is their last hope," Hill said. "It doesn't always work, but when it does it's a beautiful thing."

Ahna Suleiman's dog Madison had a stroke and refused to eat. The Alameda resident began feeding the 14 Â½ -year-old Australian cattle dog/Labrador retriever Treatibles. She said it seemed to boost her pet's appetite. Yet Suleiman, a research scientist at UC Berkeley, can't be certain the cannabis has made the difference.

"I question myself every time I order them, 'Do I really need to keep doing this?'" she said. "Then I feel if it makes her just the tiniest bit more comfortable at this stage of her life, then it's a fine investment." 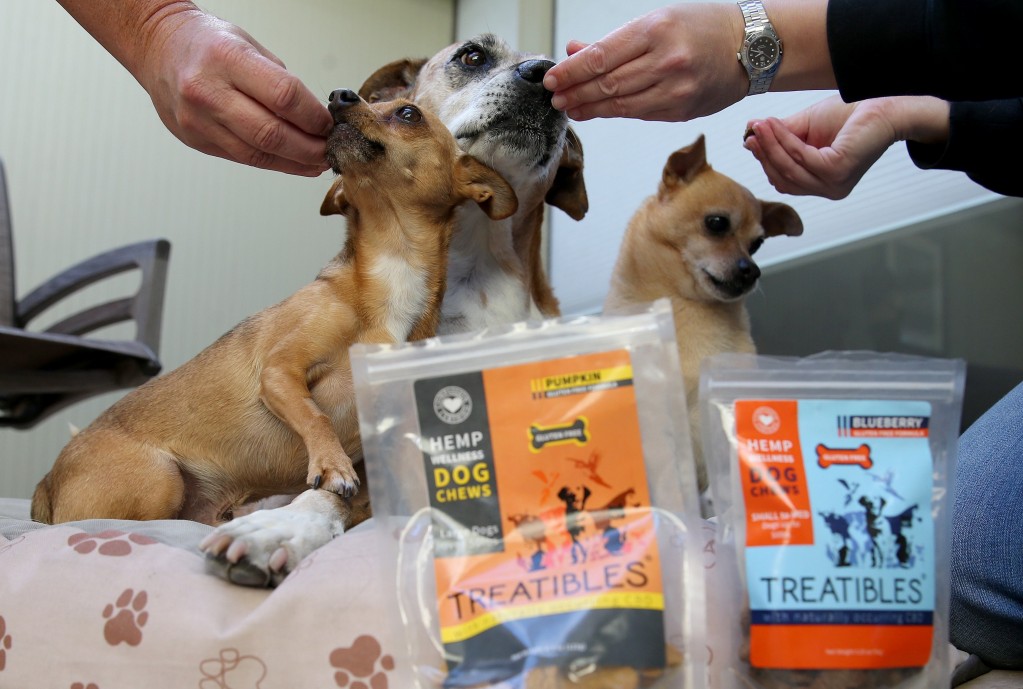