Washington State - There are still things to march for when it comes to marijuana in Washington State. Activists who came out to Saturday's annual Cannabis Freedom March and Volunteer Park rally want to make sure you won't be inadvertently sucking the life out of the state's existing medical marijuana system after making your first legal purchase of cannabis this July. "The one thing that we all have in common, no matter what group you are with, we want medical marijuana safe," a representative of Cannabis Workers Rising said from the stage during a presentation which at times turned into a raucous union rally, Saturday.

Initiative 648, an effort to put protections of medical marijuana rights in place in the state and support homegrown pot as a medical alternative for citizens, made a strong presence at Saturday's rally. Backers of the initiative tabled with petitions near the stage as speakers voiced their support for the wide ranging legislation that would allow homegrown medical pot and change rules around the legal limit for impairment for patients. "What this event does is bring everyone together on different sides so that everyone has a voice on what they believe is the right thing to do so the majority pick what is the right thing to do, and so everyone's informed," the Cannabis Freedom March's organizer Melissa Hysom said. "We're passionate, we believe in what we believe in, and a lot of different activists believe in a different way of doing it," she said. "What I love about doing this is informing people, and creating a big party in the street all day long."

Hysom said there are other causes worth pushing forward on even with the arrival of legal recreational pot later this summer: lowering the age limit from 21 to 18 for buying, possessing and using recreational marijuana and, she said, empowering young people to make informed choices though education about the pharmacology of cannabis. She said she also supports the expansion of access to medical cannabis to some patients under 18. She reiterated however that protecting the medical cannabis economy that has proliferated in Washington State over the last 15 years is a top priority. "We want to keep medical alive," she said.

In light of the passage of Iniative 502 in 2012, which legalized the use and possession of cannabis for any purpose, and which set the groundwork for the limited number of licensed sellers that are about to come to market, a flood of legislation aimed at putting a squeeze on the state's much-less-regulated untaxed medical cannabis economy was introduced at the last house session in Olympia in January. All those measures fell flat this winter, but most on either side say the battle is far from over. "Next year? Yeah, they're not done. No, these people are not done," Hysom said. In the meantime, the first wave of recreational pot stores are slated to open this summer with a project known as Mello Times topping the state's lottery list for the coveted intersection of 23rd and Union.

A Vancouver, Washington grower who goes by Farmer Tom was one of several activists to address the crowd before the march on Saturday. He said his artisinal farm that currently caters to medical cannabis users and other farms like it would be hit hard if state legislation and around medical cannabis ends up being tightened, and if enforcement of federal and other laws becomes more strict. "We've got to keep legal bud, we've got to keep medical marijuana and we've got to let the patients grow – that's huge," he said.

Adam Powers, a "bud-tender" at the Have a Heart Cafe dispensary in the U-District,. said he thinks it would be detrimental not only to business but to the well being of patients if medical cannabis is clamped down on, and says that keeping small farms open is a critical part of serving medical cannabis consumers. "The type of grows that the patient needs – I deal with a lot of cancer patients and Crohn's patients – they need very high potency," he said. Politics notwithstanding, many if not most said they came out first and foremost to celebrate cannabis itself. What brought Tony from White Center out on Saturday? "Marijuana," he laughed. "Marijuana's a great plant." A North Seattle woman's reason for coming to the Hill on Saturday was similar to Tony's she said, as she sat on the lawn with a group of friends."The pot," she said "I'm going [on the march] to support pot." However, she also had the same concerns for medical users echoed by many. "I don't want the patient system to go away with the recreational," she said. 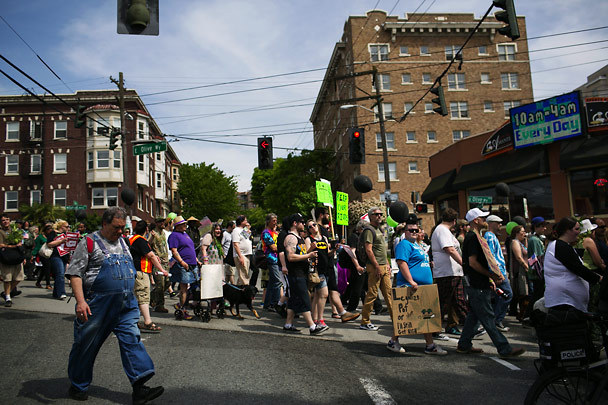