A grandmother convicted of growing cannabis at her Northumberland cottage, can continue using the drug at home.

Patricia Tabram, 68, from Humshaugh, was found guilty in March of possessing and cultivating cannabis, which she says is used for pain relief.

Her landlord, Milecastle Housing, said she was in breach of her tenancy agreement and threatened to evict her.

But after a court hearing in Newcastle, Mrs Tabram was told she could continue to use cannabis treatments in her home.

However, Milecastle Housing warned that if Mrs Tabram was convicted for either cultivating or supplying the drug in the next two years, she would be evicted.

Mrs Tabram claimed the decision was a victory for her way of life.

She said she would continue to take cannabis medicinally - but would no longer attempt to cultivate the drug at home.

Mrs Tabram appeared at Newcastle County Court, after the housing association sought permission to evict her for breaching her tenancy agreement.

Bill Tebay, chief executive of Milecastle Housing, said after the hearing: "If she is convicted of supply or cultivation, we will take action.

"The judgement as it stands means that we will not be taking action if she uses cannabis in her premises.

"But it is important to note that this judgement is specific to her and that Milecastle Housing have got a very specific policy about illegal use of drugs in its premises."

Mrs Tabram said: "I will be taking my medicine five times a day to be pain free 24 hours a day.

"That means I don't have to go down the route of using two walking sticks, having a neck brace or having to be looked after by home helps."

Mrs Tabram was arrested in 2005 when police raided her bungalow.

She was in breach of a six-month suspended jail sentence when officers, acting on a tip-off, found cannabis plants and growing equipment in a walk-in wardrobe.

She was subsequently convicted at Carlisle Crown Court. 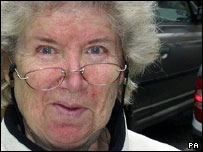 UPDATE: Cannabis Granny May Be Evicted

Cooking With The Cannabis Granny