Australia - A desperate mother, a dying child, the rigid law and one man's experimental drug. The ACT's medical marijuana debate found a name and a face on Thursday as it was revealed a 2Â½-year-old girl suffering from a rare genetic disorder in Sydney had been treated using small doses of cannabis oil supplied by a Canberra man. Sydney girl Abbey, and her mother, Cherie, have been left without access to the oil after Australian Federal Police raided the ACT home of a supplier who had contacted Chief Minister Katy Gallagher.

Ms Gallagher said she acted in line with her legal obligation to report the man's actions to child protection authorities, leading to the February raid. The supplier, who Fairfax Media has agreed not to name, said he had only ever acted in the best interest of Abbey. "I think if there was another person in Canberra who had knowledge to be able to save this baby the way that I did, they would do anything they could to help," he said.

"This story seems to have tugged at the heartstrings of a lot of people and that is very comforting to know I have that support because it is a very difficult situation." Cherie started administering the oil to her daughter after doctors told her Abbey would most probably die from the rare CDKL5 disorder, which leads to serious seizures, developmental delay, muscle problems and audio and visual impairment. About 800 children worldwide have the condition. There is no known cure.

Abbey improved enough to leave hospital after receiving the cannabis oil through a feeding tube, but the raid has left that progress with an uncertain future. After supplying the oil to Cherie without a charge, the man said he had been made out to be like a drug dealer. Acknowledging he was acting illegally, he said officers had seized only pipettes, a glass casserole dish and other household items during the raid. He has not been charged with any offence yet.

"It's not a drug lab like Breaking Bad," he said. "I used a natural plant and a very simple process to come up with a non-toxic medicine that I knew would save this baby's life. "But never underestimate the power of an angry woman. What has happened to me has quite literally put Abbey's life in jeopardy and that is unforgivable in this day and age." Ms Gallagher, who also serves as the ACT's Health Minister, received threats and vitriolic abuse online on Thursday. Some dismissed her legal mandatory obligation to report suspected harm of a child to authorities. Ms Gallagher said reporting the case came after years of correspondence with the man, who had sent her personal information and photos of Abbey.

"I felt that there was no other alternative available to me than to forward that to both child protection and to the police, which is what I did and I still think it is the right thing to do despite people raising concerns about it," she said. "It's very easy in social media to have a go, it's very easy to read a headline and not actually understand the complexities of the issues that lie beneath." Despite the mandatory reporting requirements, the supplier said a police raid had been an overreaction and only harmed Abbey and Cherie.

NSW Department of Family and Community Services officers contacted Cherie on Thursday night and are expected to visit her home to discuss Abbey's care in coming days. "I am a father myself and I know it is a very primal urge to look after and nurture and save these children. Abbey may not be my baby but I still feel that call to help when this baby is in distress," he said. He said threats of violence and abuse being labelled at Ms Gallagher "were unforgivable and despicable". A week ago, ACT Greens Minister Shane Rattenbury introduced a private member's bill to legalise medical marijuana in the territory. 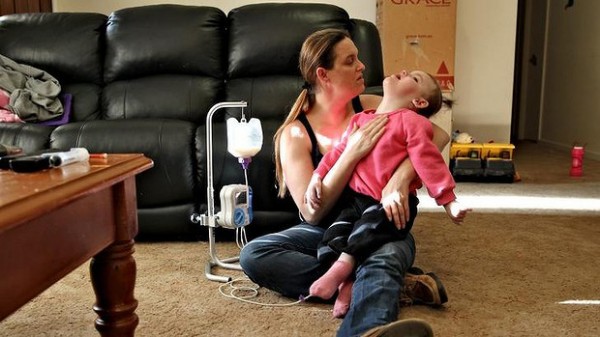