Among the lofty pines of timber country across the street from the Little Creek Casino on State Highway 108, the first tribal-owned-and-operated recreational cannabis store in the US is open for business.

Customers flow into the nondescript cabin storefront, on the Squaxin Island tribe's reservation, reflecting much of the same diversity as the rest of Washington state's growing legal cannabis market: a young couple on their way to work from the nearby town of Shelton, a retired couple who are staying at the casino. A man in a tie-dye hat buys a couple joints and tells everyone to "be good, dudes" as he leaves.

The shop, Elevation, is perhaps the riskiest venture yet for the Squaxin Island tribe 15 miles north of Olympia, Washington. The tribe is a trailblazer, often the first in the region to assert its mix of economic and sovereign rights. Cautiously, with the opening of Elevation, the tribe is testing the waters of the booming cannabis industry, its profit potential for the tribe, and members' attitudes about cannabis.

Perceived as a gateway drug in many Native American communities, cannabis has become a complex issue for Washington's tribes since it was legalized. One tribe, the Yakama Nation in eastern Washington, has banned cannabis on their reservation completely, and is pushing to stop cannabis sales and growing facilities on their ceded lands as well.

And since cannabis is not federally legal, the Squaxin Island tribe can still face lawsuits and possibly raids from the federal government — even as a sovereign nation, and even with the unique protections of a novel state agreement.

"Something could still happen," says Lael Echo-Hawk, Pawnee tribal member and an adviser on tribal economic development and legislative issues for the National Indian Cannabis Coalition, an organization formed last year that seeks to educate tribes about entering the complex cannabis market.

The first-of-its-kind legislation granted the tribe, along with the Suquamish tribe near Seattle, a sovereign right to sell cannabis on their lands. But historic arrangements between the state and the tribes have made the opportunity particularly palatable.

Elevation became possible after the Squaxin Island Tribe signed a compact with the Washington State Liquor and Cannabis Board. The first-of-its-kind legislation granted the tribe, along with the Suquamish tribe near Seattle, a sovereign right to sell cannabis on their lands. (The Suquamish opened their first retail cannabis store, Agate Dreams, in December.)

One provision of the agreement between Washington and the tribes says that if legal challenges from the federal government arise, the state will co-defend alongside the tribe. This mutual assertion of both state and tribal rights "is major, it's a very big deal", according to Echo-Hawk. "The tribes and state have kind of locked arms together and said to the federal government: what's going on in our state and on our reservation is none of your business."

The agreement provides at least some protection in a fuzzy and evolving legal landscape. A set of confusing memos issued by the Department of Justice in 2013 and 2014 was misinterpreted by some tribes as having effectively legalized cannabis on tribal lands. But they did not.

"At that time," Echo-Hawk explains, "tribes were just getting spammed with businesses that wanted to come out to Indian country and they were saying things like marijuana is legal in Indian country, which is not true." It was a similar story for tribal gaming: outside investors were eager to get in on the action, and often not to serve the best interests of the tribe.

This led to misunderstandings across the country as a flurry of plans failed to come to fruition or faced backlash. The Menominee Indian tribe in Wisconsin saw their hemp crop destroyed by the DEA, and the Flandreau Santee Sioux tribe in South Dakota had their dreams of a "cannabis resort", set to open on New Year's Eve, go up in flames when they had to torch their own crop after threats of a federal raid.

"It was very chaotic," Echo-Hawk says. "I think some tribes jumped in too fast."

The decision to enter into the retail cannabis industry wasn't easy for the Squaxin Island tribal council. After the state legalized cannabis in 2012, "we had kind of started to talk about it," says tribal council member Jim Peters. But it seemed too expensive, too risky, too controversial, he says. "Even myself, I wasn't thinking it would be a good idea for us to get into it."

But as they started to see the industry grow and the justice department softened its stance on prosecutions in October 2014, the seven-member council began to discuss the matter more seriously.

Peters, a broad-shouldered man with a full beard and a single long braid, said the cons for tribal council members on the "no" side "were that it is was an illegal drug and gateway drug. And there are health issues."

But Peters himself began to change his mind during that year after seeing the benefits of cannabis for a friend's father who was dying of cancer. The man, who had also previously been "anti-drugs", had begun to self-medicate with the plant as his symptoms worsened.

"We were over there for a barbecue one time," Peters recalls, "and suddenly he was just himself again, giving us a hard time and joking around. I'm thinking his cancer was gone, but it wasn't!"

The man's quality of life — for the few months that he had left — was "like night and day", according to Peters. "And that was a big thing for me, when it came to the medical potential of marijuana, because I saw it firsthand."

It was the potential economic benefit to the tribe that finally convinced Peters.

The tribe has a unique tax arrangement with Washington that exempts sales of cannabis that are either grown on the reservation or are sold to native customers from the state's 37% excise tax. This gives the tribe a kind of competitive edge on "home-grown" products, and the tax revenue can be used to fund tribal government services such as programs for youths and elders, and job training.

The decision may already be yielding economic benefit.

According to the Washington State Liquor and Cannabis Board, retail cannabis sales accounted for almost $260m in sales in fiscal year 2015, with both excise and sales taxes reeling in almost $65m.

Echo-Hawk says the economic potential of cannabis will probably never be equal to that of casino and gaming for tribes, since gaming is exclusive to tribes while, in states where it is legal, cannabis production is not.

By investing that money in tribe businesses and handing some back to the people in the form of per-capita payments, the Squaxin Island Tribe managed to cut its poverty rate from 31.4% in 2000 to 12.4% in 2010, according to a 2014 study.

Peters summarizes the tribal council's general position on cannabis these days as: "It's legal, and there's other people making money off of it. Why not us?"

A number of neighboring tribes are also adopting this perspective. In Washington state, the Puyallup became the third tribe to sign a compact with the state in January which allows for a cannabis testing facility.

Even in states where recreational pot isn't legal, some tribes are focusing on medical cannabis and hemp. The Paiute tribe is discussing plans with the state government to open one of the largest medical dispensaries in Nevada, and the Omaha tribe in the state has been looking into industrial hemp. Native American interest in the cannabis industry is growing. Last year, more than 400 people representing 75 tribes participated in the first tribal cannabis business conference in Washington state.

After 19 years in social service for the tribe, Marcella Cooper decided to transition into retail sales at Elevation. 'It's a new way of helping people,'

After 19 years in social service for the tribe, Marcella Cooper decided to transition into retail sales at Elevation. '[It's] a new way of helping people.' Photograph: Tracy Rector
Peters says the community is still "a little 50/50" about whether it supports cannabis on tribal land.

He compares the conversations about cannabis in tribal members' talking circles to past debates about getting involved with other "vices", like gambling and selling tobacco and alcohol on the reservation.

Like tobacco, cannabis is in that tricky position of being both a new vice for potentially vulnerable members of the community, and also a job creator.

According to the Centers for Disease Control and Prevention, American Indians and Alaska Natives have a higher prevalence of smoking than most other racial and ethnic groups in the US by almost 30%.

And according to the 2014 Native Youth Report released by the White House, "compared with the national average for adolescents aged 12 to 17, Native adolescents had the highest rates of lifetime tobacco product use, marijuana use," and other substances. At the same time, unemployment levels among Native Americans are nearly double the national rate.

"It's absolutely a tough moral decision to create this type of product," says Cameron Goodwin, 42, a Squaxin Island tribal member and manager of the Snookum Creek Tobacco factory, another economic venture of the tribe. The factory employs 17 tribal members and produces millions of cigarettes a day. Like cannabis sales, Goodwin points out that profits from tobacco are sent "up the hill" to fund essential tribal government programs. "But at the same time, it's an opportunity that you cannot pass up."

Elevation's store manager and Squaxin Island tribal member Mike Ogden, 36, used to work at Skookum Creek Tobacco. Tobacco work wasn't as rewarding as working at Elevation, he says, because he believes cannabis has therapeutic benefits. Cannabis is "something I can take care of my family with, and still have it benefit the tribe."

While he thinks it's too early to know if opinions about cannabis are changing on the reservation, Ogden says Elevation's opening has "started a conversation". 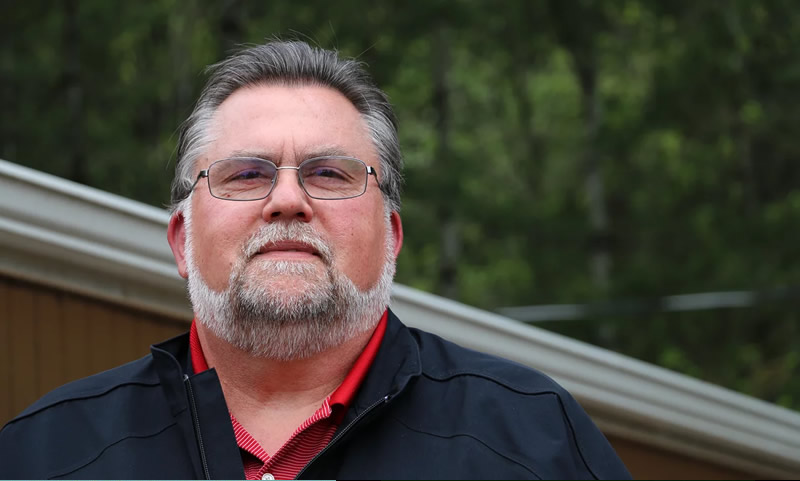 R
Marijuana Facility To Be Built On Oregon Reservation