This is a very interesting look at how Cannabis was dispensed in days gone by. Source is the Antique Cannabis book.

Written prescriptions have been around for a long time and while their origins have been lost in history, it is believed by many (including the author) that the ancient Chinese were the first to initiate the practice. 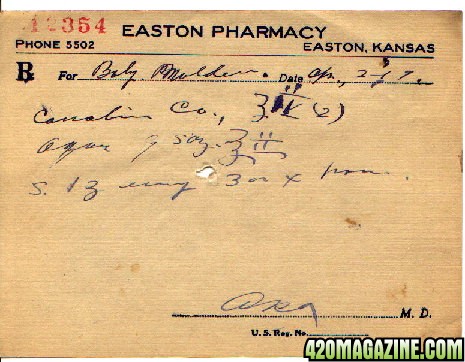 According to the U.S. Department of Agriculture,[1] the Chinese character
is suppose to be one of the first names for "MA" [the Chinese name for both Industrial Hemp as well as Medical Cannabis]. Note that if one looks at the character upside down, it actually looks a lot like an industrial Hemp plant.


16.1 - Prescriptions, their Origins:
In today's world, a prescription has come to mean: A physician's written statement that allows one to obtain an otherwise controlled substance. However, this was not always the case. Up until the early 20th century, a prescription merely meant: A doctor's written advice or recommendation and prescriptions were not limited to just pharmaceutical drugs. In fact, it was not uncommon for doctors to give their patients written prescriptions for bed rest, or a set of shoes one size bigger etc.

To many first-time antique collectors these earlier prescriptions are somewhat mystifying, even given the poor state of our public schools. We simply take for granted that the average person out on the street knows how to read and write. But this was not always the case. Throughout most of Western history, the percentage of the population that could indeed read and write, usually only stood at one or two percent. Even in the days of Benjamin Franklin (only some two hundred years ago), a community was considered very literate if more than 20 per cent of its residents could do so. Additionally, one must factor in the tendency of medicines to take on strange-sounding Greek or Latin names that few, outside of doctors and pharmacists, could even pronounce, let alone spell. Therefore written prescriptions acted not just as a memory aid, but as a means of communication between physician and pharmacist---both of whom were expected to have reading and writing skills.

16.2 -- Effects of the Harrison Narcotics Act:
However, all this began to change with the passage of the Harrison Narcotics act in 1914. While most historians seem to agree that the original intent of Congress was to establish a simple record-keeping or monitoring system for certain narcotic drugs (at the time considered dangerous), as well as act as a small revenue-raising measure. It soon took on a more sinister role with a life of its own. As interpreted by court decision after court decision, the law would soon be used D.E.A. (then known as the Bureau of Chemistry) to create gothic nightmares for the medical profession as a whole. By the late 1920's even doctors could find themselves in jail for "over-prescribing" painkillers.

The Harrison Narcotics Act, more than any other factor, changed the concept behind the written prescription. Cannabis, not being a dangerous drug, was not even mentioned in the Act, but still pharmacists began keeping records on its sale. Logbooks of all drug sales (controlled or otherwise) were soon being kept by everyone. Old prescriptions, instead of being thrown away (like in the old days), would now instead end up in a box and stored in the back room somewhere. The concept of a written prescription as a means of obtaining a controlled substance was thus well in place before the Drug and Cosmetic Act of 1938 was passed.

16.3 -- The Modern Era: [See Picture]
Contrary to what most people think, the passage of the Marihuana Tax Act of 1937 did not actually outlaw Medical Cannabis. According to an official D.E.A. [than known as the Bureau of Narcotics] pamphlet published in the late 1960's: 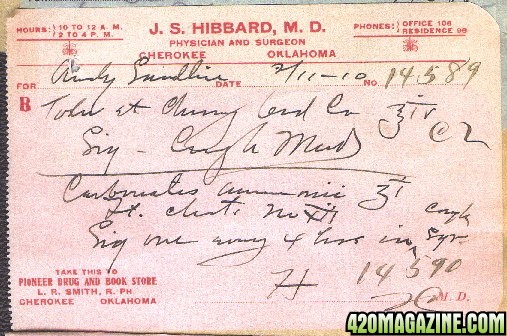 "Marihuana Tax Act
According to a quotation from a U.S. Supreme Court decision, "In enacting the marihuana tax Act, the Congress had two objectives: First, the development of a plan of taxation which will raise revenue and at the same time render extremely difficult the acquisition of marihuana by persons who desire it for illicit uses and, second, the development of an adequate means of publicizing dealings in marihuana in order to tax and control the traffic effectively."

Under the law a physician can write a prescription for marihuana and a pharmacist can fill it. But the use of this drug for medical purposes is considered nil. It has no therapeutic value whatsoever. Therefore, both in the United States and countries abroad, marihuana has been dropped from most of the listings in pharmacopoeias. "[Official Pamphlet - Entitled: Prevention and Control of Narcotics Addiction -- Issued by - U.S. Treasury Department; Bureau of Narcotics, Washington, D.C. 1967 ]

However, these prescriptions (for obvious reasons) are few and far between.[2] 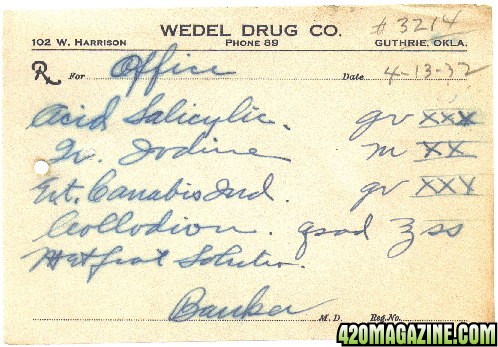 16.4 -- Sets: [See Picture]
While it is possible to buy individual prescriptions from antique dealers, in most cases they are sold only in sets or some kind of grouping. While some of this is due solely because of their (still) low price, and it isn't worth a dealers time to only sell one at a time. The main reason seems to be because of the way they are found in old drug stores. Some druggist, for instance, literally glued their old prescriptions to ledgers or other kinds of book, thus making it impossible to separate them. Still others used other forms to bunch them together etc. These pictures give some examples.

Being philosophical, it can be pointed out that the back rooms of these older "mom & pop" drug stores have become a historians' heaven and a treasure trove for the antique hunter. So many cannabis prescriptions have been turning up that the prices are somewhat low.


16.5 -- CALIFORNIA PRESCRIPTIONS: [See Picture]
Although California was one of the first States in the Union to re-legalize the use of Medical Cannabis. It also bears the unfortunate distinction of being the first State in the Union to have originally outlawed its use in 1913.[3] And according to the LA Times,[4] it was also where the first known Medical Marihuana arrest took place in 1914.

Because of this and other factors, many mistakenly believe that there was never any medical use of Medical Cannabis in the State; and thus no sense in looking for old medical prescriptions from there. However, as can be seen by these pictures [our apologizes, they were the best copies that we could obtain], Cannabis was indeed in medical use. In fact [law or no law] Cannabis was still to be found in California Drug Stores up until the 1920's.


16.6 -- WHY MANY CANNABIS PRESCRIPTIONS ARE BEING IGNORED: [See Pictures]
This label [see picture] shows a major problem faced by Antique Cannabis Collectors today.

In other words, unless one already knew that Cannabis was an ingredient, a prescription for this product would provably be ignored by most antique collectors.

While Cannabis was a stand alone drug, (meaning that it was the primary or sole ingredient), it was mostly used in pre-1937 medicines as only one of many other ingredients. These being the so called compound drugs.

Unfortunately this means that many old prescriptions do not read: "Cannabis, Tincture thereof", but instead list the individual drugs' name. Examples above:Chlorodyne, Bromidia etc.

Thus many medical cannabis prescriptions (mostly due to ignorance) are being totally ignored by collectors. The two prescriptions shown above serve as excellent examples. Unless you knew the product contained Medical Cannabis as one of its ingredients, the typical Cannabis antique collector would have paid little or no attention to them. [Hopefully this book will change much of that.]


16.7 -- EVALUATING Cannabis Prescriptions: [See Picture]
By far the most sought after (and thus most valuable) Cannabis prescriptions are those that tell a story or have a special meaning behind them. As an example, Note the following two prescriptions shown . Note, how one has so much detail that it almost tells us a whole story, while the other one (written on scratch paper) only seems to tell us only how cheap the doctor was.

Question: -- If you were an antique collector, which one would you pay more for?


16.8 -- PRICES:
Like any other antiques, medical or otherwise, the going market price of written Cannabis prescriptions will vary due to numerous factors:

Physical condition: Yellowing of the paper, tears, or undue rubbing, will obviously decrease the value. Age: Those written before the passage of the 1914 Harrison Narcotics Act, which required record keeping, are very rare and therefore command a higher price than do those written after 1914. However, surprisingly (for political reasons) those written after 1937 are the most valuable and command the best prices. Amount of Information: Like many other things in life, the ability of an object to convey a story will increase its worth. Take, for example, the two prescriptions on the opposite page. One could almost fantasize about the one on the left: Did the pharmacy provide the doctor with free stationary? Could I locate the pharmacy on a map today? On the other hand, the one on the right is barely recognizable as a prescription, and only seems to inspire a sense of cheap-skate-ness.

At present (mostly due to the shear volume of available product), antique prices on Cannabis prescriptions are still very low, with the average one still selling below $10. But prices can vary from between $5 and $50. And, I have noticed that every time the narc's make a major Medical Cannabis arrest, the prices go up shapely.

16.8.1 -- CAVEAT EMPTOR [Let the buyer beware]:
To our knowledge, no young entrepreneur has yet to start printing up his or her own reproductions. This is probably due to their low cost. However, if there is one thing the very subject of Cannabis has taught us, it is that any time there is a market for something, sooner or later, someone will come alone and fill that demand. Therefore, insure that you know who you are buying from, and don't be afraid to ask where the object originally came from.

[1] - Yearbook of the U.S. Department of Agriculture 1913, pp288.
[2] - See Chapter (this book) on the history of the anti-Medical Marihuana Law.
[3] Actually, this is not technically correct. Most historians now agree that Cannabis was accidentally included in a poison control law that was passed by the state legislature, and that no one really knew that such a law was in place until many years after the fact.
[4] The Los Angeles Times --Sept. 10, 1914 "Wagonload of Dreams Seized." Note, the arrest actually took place under a city ordinance, not the state law.​

Cannabis As A Treatment For PMS And Other Female Ailments

Current status of medical Marijuana around the world