1. Identify a religious use.
2. Sincerely believe.
3. Document your belief.
4. Practice your belief.

Most of the world's religions have used cannabis in some form for religious ritual and belief.

You may keep your existing religion and incorporate ancient Egyptian or other religion's beliefs about cannabis (see ntr sentra).

You may join any modern or ancient variation of any religion that has religious beliefs about cannabis that you personally agree with.
religious uses

There are many well-documented religious uses for cannabis.

dance and music: Some African and Asian religions have used cannabis for religious dance and music, including ancient Egyptian, Gypsy, Hellenism (Greek), Hinduism, Islam, Kemetic, Mithraism, Pygmy, Rastafarian, Shamanic/Tribal religion, Shintoism, Wicca, and Witchcraft. This use originated with the Pygmies and was part of Bes worship (the ancient Egyptians learned Bes worship from the Pygmies while trading for ivory and gold). Bes worship involved the use of belly dancing to tell religious myths, including the original version of the Garden of Eden myth.

medicinal: Almost all world religions call upon their members to heal and care for the sick. Cannabis is the world's safest and most useful medication. Today in California (and other U.S. states with medical marijuana laws), many farmers grow cannabis for cannabis buyers' clubs and other methods of distributing vital medication to those in need.

nutrition: Almost all world religions call upon their members to provide for the poor. Cannabis is one of the fastest growing and most complete food sources in the world. Some farmers grow cannabis for food.

2. Sincerely believe. The U.S. Supreme Court requires that your requirement to use cannabis must be a sincerely held religious belief. Pr Ntr Kmt offers free information on ancient and modern practices so that you can learn and be prepared to defend your belief.
legal standard

The legal standard in the Religious Freedom Restoration Act is that religious beliefs must be sincerely held.

In the 1990s a Los Angeles woman claimed a religious defense for prostitution. She claimed to be a priestess of Isis and claimed to be engaging in an ancient Egyptian religious practice where a priestess has sex as the Goddess rather than as a human. The jury was going along with her defense until the prosecutor asked a series of simple questions about Isis that the woman was completely unable to answer. This failure convinced the jury that her religious beliefs weren't sincere.

Pr Ntr Kmt offers an official identification card that informs law enforcement and government that you have the legitimate and legal right to grow, possess, and use cannabis as part of your sincerely held religious beliefs. 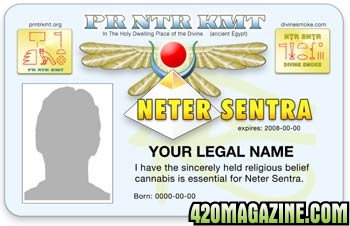 Pr Ntr Kmt offers an official certificate that you are a member of the priesthood of the ancient Pr Ntr Kmt religion. 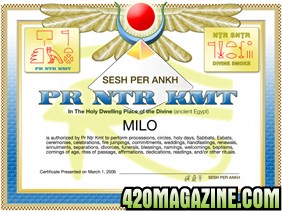 Get a beautiful certificate declaring that you are a priestess, priest, high priestess, high priest, druid, guru, hem, hemet, sesh per ankh, was, witch, or shaman of Pr Ntr Kmt. This is a real religious certificate meeting government standards for conducting marriages and other ceremonies.

4. Practice your belief. Establish a clear history of practicing your religious beliefs about cannabis.
practice

The use of a specially blessed prayer kit can enhance the holiness of your religious cannabis use.

The use of vaporizers can enhance the safety and healthiness of your religious cannabis use.

Cannabis Has Always Played an Important Role in Religion

The Holy Herb - Sacraments and Cannabis