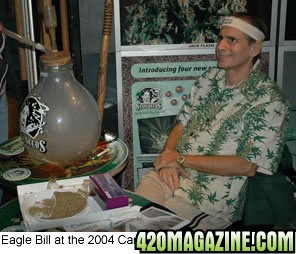 Eagle Bill Amato, born Frank William Wood, passed peacefully in his sleep on Sunday, May 22, 2005.
Born, April 10, 1942 in Cleveland , Ohio , he was 63 at the time of his death. Two months ago he was diagnosed with advanced cancer. He spent his final days helping ready a new publication of his autobiography and enjoying time with his friends and family.

A resident of Amsterdam for 12 years, Bill returned to his native Georgia in the United States so he could die in the company of his family and friends there. Bill was of the Cherokee Nation in ancestry and spirituality. In the face of grave illness, Bill kept his determination to die with dignity. His passing was a lesson to all involved about how to face death without fear.

Eagle Bill is known for the popularizing of the vaporizer, which he termed a "safe and effective alternative to smoking." For over a decade he was a favored exhibit at the Sensi Seed Hash Museum in Amsterdam. The museum attracts visitors from around the world and Bill enjoyed sharing his new technologies any willing inhalers.

Bill wore many hats in his life. A native of rural Georgia , Bill's first venture was doing the local thing, stealing cars. In his autobiography, 10% THC, A Cannabis Tale , Bill describes how a friend turned him on to marijuana and this changed his perspective on life. From then on he quit doing stupid, illegal stuff and became a small-time marijuana salesman. Bill started growing pot in the late 60's. This started with one castaway seed that sprouted next to his driveway. The plant grew to 9 feet tall before Bill noticed it and reached 17 feet tall at harvest. Bill had a new occupation. The next year s Bill planted 18 plants and year by year his ambitions grew as fast as the weed. At the time he got busted he was raising exotic birds and horses and living the good life.

After prison, Bill continued to grow for himself and became a recognized expert in home growing of quality sensimilla. At one point he visited Amsterdam and made friends with the Ben Dronkers family, proprietors of the Sensi Seed Company.

Bill's second life conversion came during the weekend that Bill and his companion Linda visited me at the Ohio Hempery. Linda wanted to pick up some cloth for sewing. Bill wanted legal advice. I was heading out to a regional Rainbow Gathering and invited them along. Bill quickly rose into the spirit of the gathering and has not been the same since. That weekend we had a long chance to talk about Bill's legal problems. Bill was tired of being in the closet. He was determined to shake up the world about his two issues, native rights and marijuana. He said he did not care what happened to himself in the process. After hearing of the unsafe chances Bill was taking in Georgia , my advice was clear, get back to Amsterdam as quickly as possible. Bill would be safe there..

Thus Eagle Bill was born; a native spirit out change the horrendous laws against marijuana and hemp. Linda sewed her hemp cloth into a full battle dress for Bill to wear on his mission. Bill finished his affairs in Georgia and headed off to Europe .

Bill met a good reception on his return to Amsterdam , especially from the Dronkers family. This was soon before the 1994 Cannabis Cup.
Sensi Seeds gave Bill space and he blew away the crowd with his new technology. It remained the most popular exhibit at the Cannabis Cup for 10 years, earning Bill and Sensi Seeds numerous first place cups. Soon he set up shop on a daily basis in the Hash Museum and used that platform to turn the world on to vaporization.

Bill devoted the rest of his life toward making people aware that smoking herbs like tobacco or cannabis causes inhalation of carbon monoxide and carcinogenic tars. These harmful compounds have no known psychoactive effects. The only reason to burn herb was to generate hot air to evaporate the aromatic resins from the unburned material. Vaporizers use hot air only, no smoke and few carcinogens are produced. The result is a much cleaner high than anything anybody had experienced before.

Bill invented several forms of the vaporizer including the 10 gallon jar model he displayed at large shows for its dramatic effect. His one piece glass "shake and bake" pipe was adopted by the Netherlands government as part of their medical marijuana program. The Eagle Bill vaporizers are now available at most any pharmacy in Holland . 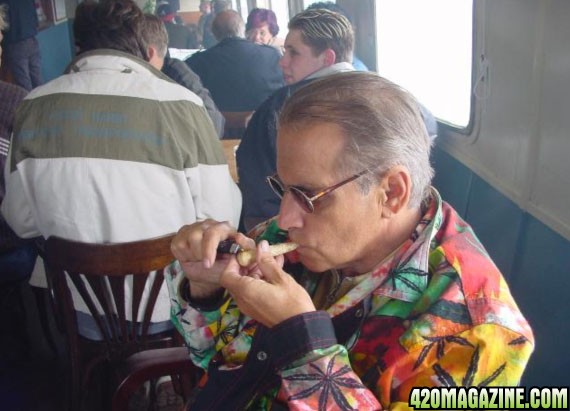 2004 - Cannabis activist, Cherokee Marijhuana Medicine Man, Reefer refugee, and one of the pioneers of the world of vaporization, Eagle Bill has had over 20 years experience growing cannabis and is devoted to educating people about the fact that Marijhuana can be a medicine.

A well-known figure on the Amsterdam cannabis scene for fifteen years, Eagle Bill is American, from Cleveland Ohio. Two English grandparents notwithstanding, he is part Cherokee. "Only a little part, y'understand, but it's the key part." The active ingredient. After an extremely colourful life, near-death experiences and larger than life brushes with the law, snippets of which he may tell you if you earn his trust, he found himself in Amsterdam learning about the technique of vaporising cannabis, before any of today's devices existed. He felt that this way of taking the herb had to be much safer than smoking it, and he's promoted vaporisation ever since.

Over time Eagle Bill developed the 'Shake 'n Vape', a portable version of the vaporiser. He has also wrote a book called '10 % THC, a cannabis tale'.
He has been seen at numerous cannabis venues, with his huge vapor bottle and hot air gun, or with a more portable modern electrical device, with long queues waiting for a go on his vaporiser. He's 'vaporised' thousands, per year, as resident at the Hash and Marihuana Museum, and all the current vaporizers owe something to him.
Last edited by a moderator: Oct 1, 2008
420 Magazine
Creating Cannabis Awareness Since 1993

I've got some Hemp Heroes and Cannabis Crusaders from before the 20th century up my sleeve.

I'm going to post a lot more in here once I've finished with the "Celebrity Toker" forum.

What an interesting life this icon led. Hoo-ray for Eagle Bill! :31:

May he rest in peace.

Hoo-ray for vaporizing!
215-er/OCBC/bpg/norml-ca/ASA-ca
Holding onto anger is like grasping a hot coal with the intent of throwing it at someone else; you are the one who gets burned. - Buddha

i hit that vaporizer with eagle bill once in amsterdam...
what a great guy he was!
yet another fallen comrade who was fighting this war on a plant with us...
all my love and respect to his memory, family and friends...
420 Magazine®
Creating Cannabis Awareness Since 1993
420 Magazine Sponsors
420 Mag Sponsor References
Helpful Links For New Members
420 Magazine Contests: Win Free Stuff
Forum Guidelines: Please Read Before Posting
420 Photo Gallery Tutorial: How to Post Photos
The Case of the Mysteriously Disappearing Growers
Please Tell Us About Your Experiences At 420 Magazine

That's so cool Rob! You've smoked with so many people I can only dream of burning with.

Eagle Bill was Da Man! The Father Of Vapor!

FOOK Did he care she was called Paris!