My cat destroyed /ate a bunch of fan leaves , bit half of the leafs off . should just take them off plant , its an auto

I don't profess to be an expert on the subject, and correct me if I'm wrong... But wouldn't it be prudent to give the cat a beer so it can be Stonedndrunk also?

"The most common side effects of marijuana intoxication are "drunkenness" (with pets appearing impaired and uncoordinated), sedation and urinary incontinence. THC and other cannabinoids affect the central nervous system, causing disruption of normal movement and behavior. However, about 25 percent of pets who ingest THC become stimulated instead – with agitation, vocalization and high heart rates as possible side effects. The most severely affected animals are typically the ones who have consumed marijuana edibles. These products can have very high levels of THC. There have even been some dog deaths reported after eating cookies or brownies made with marijuana butter because pets, unlike humans, think nothing of opportunistically wolfing down an entire pan of edibles.

While dogs are the most common pets to ingest marijuana, cats will eat the plant material. Because of their apparent lack of a sweet tooth, however, they are less likely to consume the more tempting edibles. After ingestion, pets can become affected in minutes to hours, and signs can last for hours."

Note to PETA: No animals were harmed in the creation of this message.
BCNL Producer Journal

"There are no gardening mistakes, only experiments."-- Janet Kilburn Phillips
S

Cats fine ... And I dunno if getting that cat stoned n drunk would be good he's a dink as it is , who knows maybe it would help ... Anyways should I be pruning fan leaves , its in mid flower

Certainly only kidding, poor humor. Have 3 myself.

Good question. Can't see leaving them being a problem other than the potential for pathogenic ingress via the nibbles. In my case, all plants begin their lives with their fan leaves cut in half and thrive because of it.

Just as with motor oil, everyone's got their own opinion on the removal of fans. My take is that if they weren't fundamentally necessary they wouldn't be there. I take them at very select times:


As long as there's sufficient leaf mass/surface area remaining to conduct photosynthesis and transpiration this could be a non-issue for you.

It's a judgement call on removing them. A visual would be helpful in order to offer anything further.

Well that either helped a little or muddied the water. Apologies if it's the latter.

"There are no gardening mistakes, only experiments."-- Janet Kilburn Phillips

as the servant to two cats, my furkids have chewed on a few leaves leaving teeth marks but I keep catnip in the house too. I grow and clone catnip plants (and tomatoes) so I have something for them to eat and distract them from my cannabis. The dogs may well have died (in the report) due too the ingestion of chocolate as that is toxic!

my pomeranian girl eats grass. and, she prefers weed, when my outdoor is avaiable. chocolate, in small amounts, is not a death sentance. but remember, the darker the cholcolate, the worse it is for them. so, i switched, from an m%m treat, to a reeses peanut butter type. lol. NEVER EVER give dogs grapes or raisens! these can cause renal failure, and, not a small chance of it, either. a good chance. as far as the weed goes, she does not eat enough anyway. and, being a short dog, actually helps do the lolli-poping. i put up 4 x 8 lathe, to keep the cat from using my ouredoor, as a litter box. and, it adds to a bit of camo..... 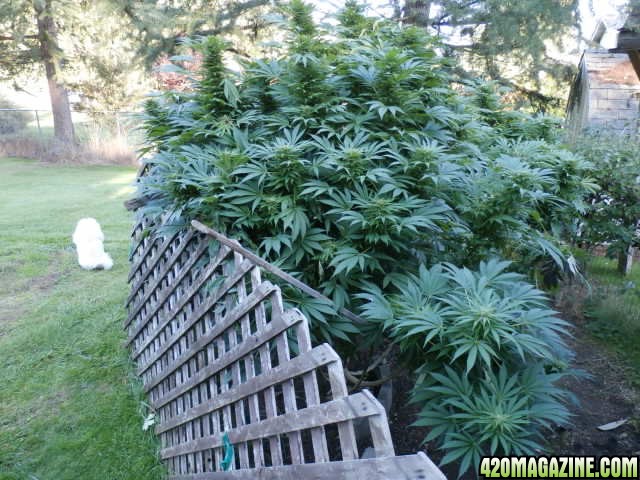 G
My cat ate the cotyledons off my seedlings! Are they gonna be ok?

Is it time to leave off my clone dome?