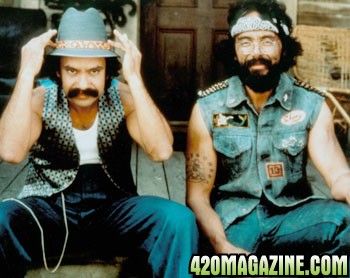 Richard "Cheech" Marin and Thomas Chong were one of the most popular and succesful comedy teams of the 1970s. In much of the same way WC Fields had made alcohol the focus of his comedy act, Cheech and Chong championed and made fun of the pot culture of the seventies.
They are undeiably counterculture heroes and their comedy defined an era.

Looming over the horizon, an aging ice cream truck with a grinning clown's head on top bounces over the rise and into view.

The bearded, bespectacled driver has the look of a Tibetan explorer who took a wrong turn halfway to Shangri-La. His short, wiry seatmate sports a Zapata mustache and a gaze that leaves no passing female fully clad.

They are Cheech and Chong ... and to those fans for whom they've come to stand for counterculture shock, they have done the unforgivable. They have signed on for a steady gig ... as ice cream vendors.

Worse yet, they have milked the sherbet trade for a fortune.

And since no one has ever done so well by dispensing popsicles -- nor done it with such glaring good humor -- certain people are getting suspicious. Especially the L.A.P.D.

In their first movie, "Up in Smoke," Cheech and Chong were out of work, deep in debt, and hustling for a buck by doing anything the law disallowed.

The film -- frantic, funny and free -- was the runaway comedy hit of 1978, and established the pair as their generation's answer to Laurel & Hardy, Abbott & Costello and Martin & Lewis.

The picture's enormous box office success, in fact, made them the screen's most successful comedy team of all time.

In their next movie, prophetically titled "Cheech & Chong's Next Movie," the pair flirted with solvency, thanks to Cheech's go-fer job on a movie studio backlot.

Again the box office boomed, until the combined total of both Cheech and Chong movies passed the $160 million mark.

Clearly the scrambling, hustling, conniving, duping duo hit the mark with young moviegoers. "It was like there was this great nerve running through everybody," recalls Cheech, "and it was where we were."

But how did they get that way ... Cheech of the peppery stream of chatter, Chong of the laidback lunacy?

When they first burst into prominence back in 1970, each had followed his own offbeat path to a nightclub in Vancouver, British Columbia, where they found they played well off each other.

My grandpa worships cheech and choong, he was who told me about their movies. They're Pot Kings
4

does any one know the name of one of cheech & chong's movie "where cheech & chong goes inside a greenhouse & chong starts taking the cannabis plants in a bag & they accidently they tear the greenhouses sheet & theres a helicopter going by & cheech gets up in a ladder & strats swimming for they could think its a swiming pool" its funny...i saw it once but i dnt remember the name of it ?
:bigtoke::bigtoke:

420 stoner said:
does any one know the name of one of cheech & chong's movie "where cheech & chong goes inside a greenhouse & chong starts taking the cannabis plants in a bag & they accidently they tear the greenhouses sheet & theres a helicopter going by & cheech gets up in a ladder & strats swimming for they could think its a swiming pool" its funny...i saw it once but i dnt remember the name of it ?
Click to expand...

I love Cheech and Chong! It seems like the newest generations don't know anything of them....

I went to see them a couple of years ago when they were doing there "Make it Legal" tour. They did the infamous blind melon chitlen among others and the finale cheech came out in a pink tutu and did the earache in my eye song that they did in the battle of the bands in up in smoke. The roof came off the place! It was a good times and was so great to see them live. The message they were sending is also a great one. I was just reading on another thread about actors coming forward about there use of marijuana and how it should be legal and if more came forward there would be some great sway for the goverment to decriminalize it and make it legal.
Current Grow Journal

"We cannot expect people to have respect for law and order
until we teach respect to those we have entrusted to enforce those laws."
~ Hunter S. Thompson

I still have the big bamboo album with the paper in it. Dave's not here man

Dr. Strange Bud. How I Quit Worrying And Learned to Love The Medi Bomb - Completed!

Got my feet wet now its time to dive in - Completed!

...beware of being the roller when there's nothing left to roll
Nostalgia just aint what it used to be
H

Sending prayers and goodwill to Tommy.....Our hopes are that the Hemp Gods will help to ease his pains and will cure his cancer. These guys will both always be American Icons in the movement to stop marijuana prohibition.
Tommy has been one of the the most outspoken celebrities out there, especially since our government threatened to incarcerate his family and stole his money in 2003. For selling pot pipes and bongs, no less!!! During the sting called "Operation Pipe Dreams" over 2000 federal, state and local LEO's all over the US were involved the sting. He was among 22 other people that were convicted. Known to this day as 2/24 by glass blowers all over the US.
I will always love what his wife Shelby had to say during the trials...."He's being sentenced for making jokes."
Which was very sadly the truth. Obviously our government during that time did not like his jokes. We all know that they really went after him to make an example out him for who he is. I think that this is when America really started opening their eyes to how silly this war on drugs has become. All of this over pipes and bongs.......REALLY!
At the same time they can't keep heroin out of prisons.......REALLY
Bogals the mind.......REALLY

My most sincere Prayers and many thanks go out to Tommy and his family!!!
A

Stacy Keach as the copper obsessed with chasing them. He was using a lookalike revolver vapourizer back then. And I find myself just using my vape now exclusively.

No stems, No seeds, that you can see, Acapulco gold is bad ass weed.

Oh my parents loved Cheech and Chong! So am I. Thanks man
Everything in excess is opposed to nature.​

Loved the movie were the gal snorted the Ajax

Chat and Chong - An Interview with Tommy Chong

Cheech and Chong: The Fathers Of Stoner Comedy Return To Their Canadian roots