This is my first journal here on 420Mag and I'm super excited to say that I owe it all to the Capn himself! This journal will run alongside the Heavyweight challenge between The Capn and S1ing to see if I can try and keep up with these two bosses as they strive for 1LB Monsters. Which if you have read there journals before you know they are very capable of achieving this and much more. The two plants I have chosen to run are Ak-47 and Chem Dawg. This will be done Capn Style, Top Feed with a Rockwool Mini Cube medium. I will be using Cogo's Original 1 Part Cannabis Formula alongside OG Tea's Veganic Special Sauce as my beneficial bacteria and mycorrhizal fungi enhancement. This will be hand fed once a week directly to the base of the plants. With the Cogo's I am feeding once a day but as time goes on I will inoculate 2-3 times daily allowing for plenty of runoff in order to ensure stable PH throughout medium. I will also be foliar feeding once to twice a week with 100% soluble Kelp extract. PH of nutrient solution will be kept between 5.5 and 5.8 as that is the recommended range for the nutrients I have chosen. I hope you all enjoy!
Chem Dawg Capn Style Lightwieght Rookie Challenge 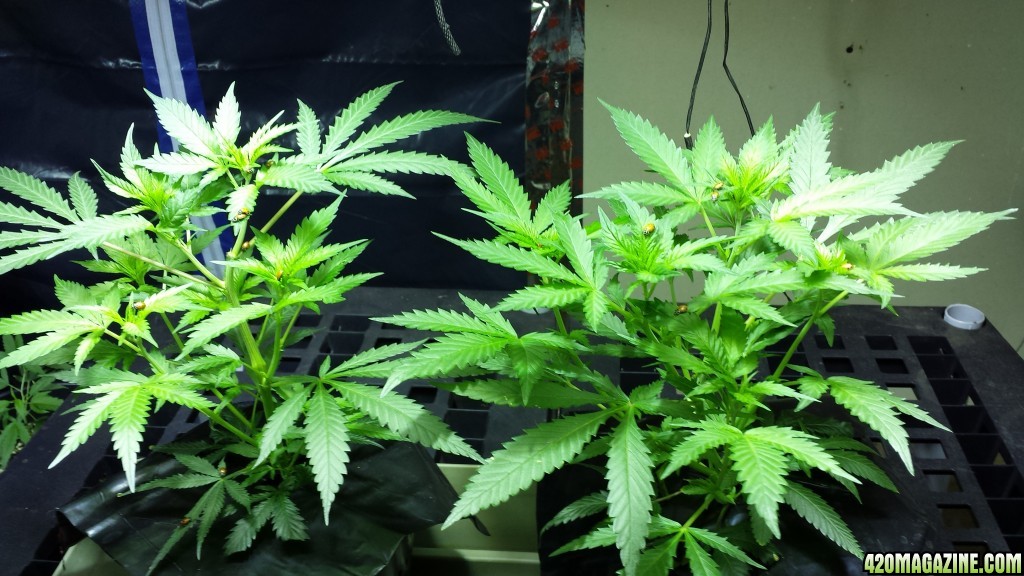 So here we go! These are my two girls on day 11 of their long journey to 1LB Monsters (I hope!

) I received these clones from a friend on 9/11/2014 and will be veging them for two solid months. The sexy lady on the left is the AK-47 and the one of the right is the Chem Dawg. As you can see they are being heavily guarded by my ladybug warriors. I like to introduce ladybugs into my garden every once and a while to keep the pest away. So they are there as a preventative measure. As you can see i topped these two as soon as I received them and they are looking like they are evening out nicely. Remember the key here is short and wide if we want to reach our goal and it looks like we are well on our way! Also I'm sure some of you will notice the knot in the AK-47. When I received the AK she was a little bit tall and should have already been toped or tipped as S1ing would say. So I decided to bend her over and allow for the other side branches to catch up. It's worked pretty well as she is bushing out nicely. I will not be doing any more high stress training, strictly LST from here on out.
Chem Dawg Capn Style Lightwieght Rookie Challenge
G

Learn to heal yourself in a safe non-euphoric way while treating/managing/healing ailments from serious to preventive maintenance. Available only on the worlds foremost leader in "awareness" 420 Magazine. Just follow these links.

**How to make Concentrated Cannabis Oil**

In for the Chem Dawg, you can do this LumenNation!
DRM's OSH under T-5 journal

Those are pretty plants. We would like to see your grow method soon. You pots, your media, your nutrient recipe, how often you feed and all that!
J

Thanks All for subscribing! Capn I will be sure to outline the details in tomorrows update. Also if you scroll up I put a little bit of that in my introduction post. Stay tuned! and thanks again!
Chem Dawg Capn Style Lightwieght Rookie Challenge

*How to make concentrated cannabis oil

I do believe my first grow will be with Chem Dawg, so I'm really interested in how well that one does.

That day 11 photo makes me wonder just how large they were at cloning.
DRM's OSH under T-5 journal


LumenNation said:
Thanks All for subscribing! Capn I will be sure to outline the details in tomorrows update. Also if you scroll up I put a little bit of that in my introduction post. Stay tuned! and thanks again!
Click to expand...


If possible, can you also include good details about your grow space(s)?
How to Use Hydro Buddy and Make Nutes from Salts
3D Printer post and suggestions - (growers NEED a printer)

Hey all sorry I have been absent for a couple of days here. I have been quite busy the past couple of days. I will have an update for you tomorrow. With that update I will give details on my grow spaces as well Sky. Thanks for tuning in guys! Also I have noticed with growth that my plants look very similar, I think someone might have mislabeled... The reason I say this is because I have grown this particular cut of AK before and it grows much darker with slimmer more sativa leaves. Wouldn't be bad thing I can dig 2 Chems! Pictures to come I will let y'all decide.
Chem Dawg Capn Style Lightwieght Rookie Challenge

Hey all sorry about the dealy I have been swamped latley at work and haven't had much time to post updates for you all. I transplanted from 6" net pots to 1 gallon nursury pots on 9/26/14. Thats 14 days from clone. 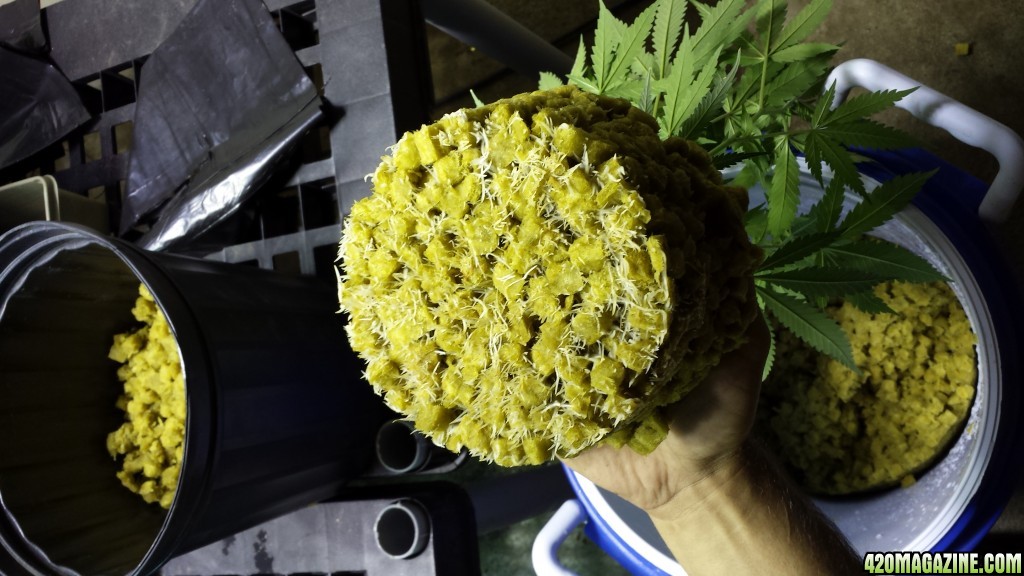 AK-47 (Left side) Posible imposter... Looking like a Chem 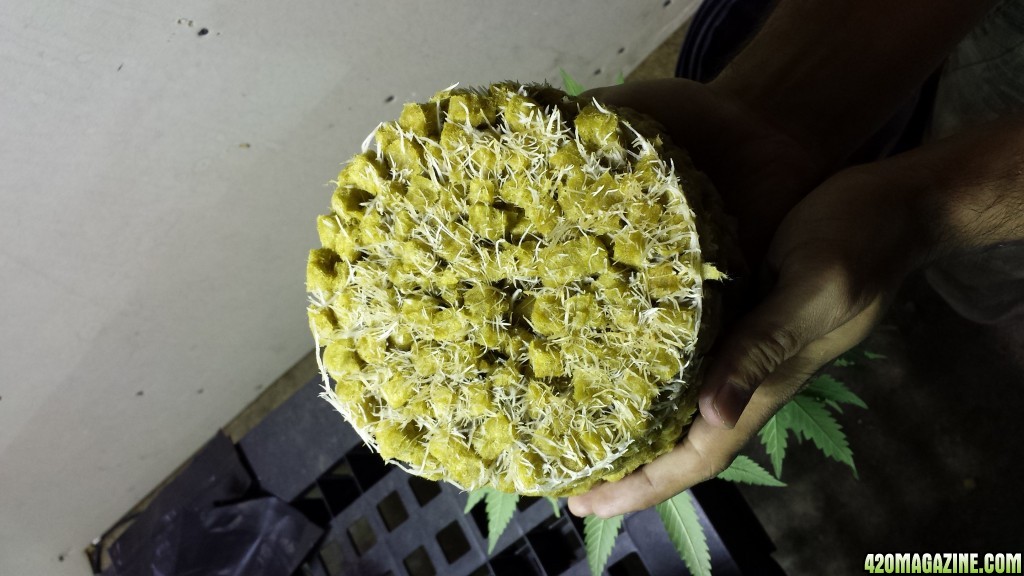 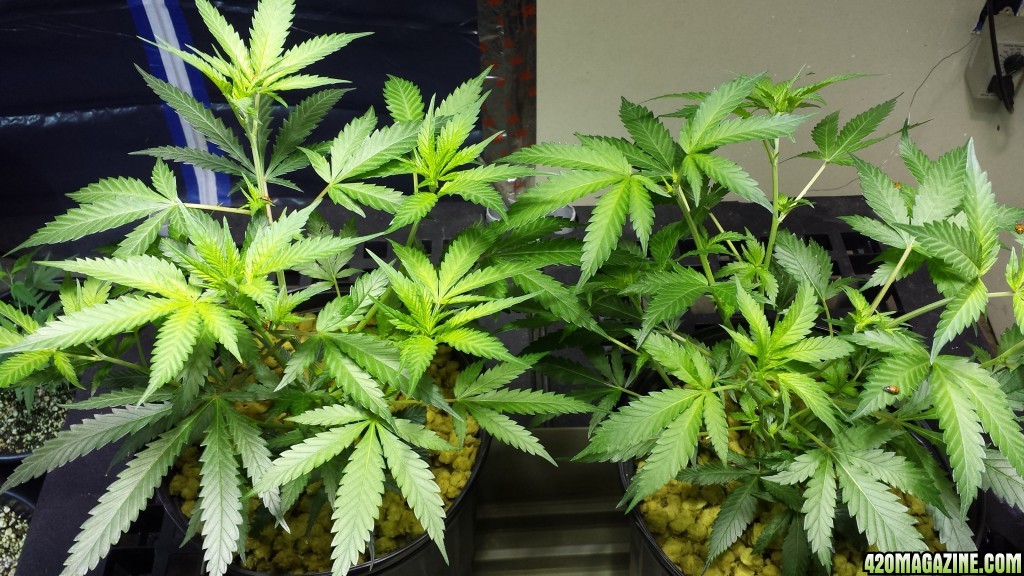 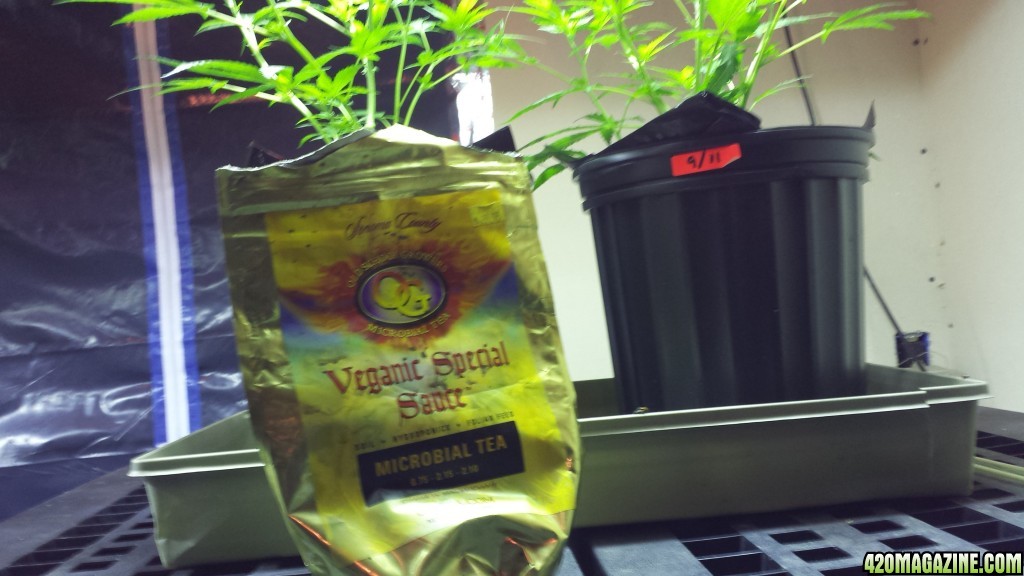 Okay now to answer some questions. As for my veg room I am using a 600w air cooledMH dimmed to 300. My veg room is 6x8 I have a 720cfm fan that I use for fresh air intake/cooling. In my flower room I have 4 600w hps air cooled lights. I will be dedicating each light to a plant in a perpetual grow 2 plants on one side 2 on the other one month apart. I use cogos original 1 part cannabis formula for nutes. I also use OG tea once a week hand fed at the base of the plant as well as a foliar application. My flower room is oversized at 12x16. If you have never used OG tea I recommend it. It's a tea that needs no brewing just add mix and apply. I love simplicity!
Chem Dawg Capn Style Lightwieght Rookie Challenge

Looks like you have good root development. I think you'll do just fine.
DRM's OSH under T-5 journal

Yea nice roots, but I would let them fill out the pots more with roots before transplanting.

I think the roots were stubbed due to being in an air pot.
How to Use Hydro Buddy and Make Nutes from Salts
3D Printer post and suggestions - (growers NEED a printer)


Skybound said:
I think the roots were stubbed due to being in an air pot.
Click to expand...


I don't believe he started in an air pot, is there any harm in transplanting now rather than waiting till they crowd each other?

I've been trying to get a better grasp on Capn style for a while now and as I understand it, it's best to let the roots circle the bottom a bit, then transplant, and repeat this pretty frequently (only when roots begin to get bound) to build the root zone out more evenly rather than putting a transplant in a much larger pot and just letter the roots grow straight through the media. That was my mistake about the air pot, but IMO a net pot (like used in DWC) would allow much more air in than an air pot. I'm eager to see how this turns out b/c I asked capn some months ago if it would be good to use a series of air pots for the entire grow rather than just at the final pot.
How to Use Hydro Buddy and Make Nutes from Salts
3D Printer post and suggestions - (growers NEED a printer)