As Chileans head to polling stations Sunday to choose who will represent its two major political coalitions in the November presidential elections, some candidates have called for changes in drug laws.

The campaign group "No MÃ¡s Presos Por Plantar," or "No More Penalties for Planting" created a ranking of presidential and parliamentary candidates according to their positions on cannabis regulation. On the page, Vota Cannabis, presidential hopefuls JosÃ© Antonio GÃ³mez and TomÃ¡s Jocelyn Holt both scored "green leaves," meaning they have openly called for a change to Chile's drug policy, codified in a law referred to as "Ley 20,000."

Mario Vergara, spokesman for GÃ³mez's Radical Social Democratic Party (PRSD), believes that the current law needs to be changed as it is full of inconsistencies and because drug policy to date failed.

"For example, consumption is legal but two friends can't meet and consume, as this classifies as organised consumption," Vergara told The Santiago Times. "The same happens with carrying, as the allowed amount to carry is not specified, only that it is an amount that can be consumed 'in the near future,' whenever that is."

The group No MÃ¡s Presos Por Plantar has condensed its petition, available in an executive summary, in five points, used to determine where the candidates stand on the issue. The demands include the classification of drugs on scientific bases, the elimination of a list of lawyers who defend drug cases, the establishment of authorized amounts and the decriminalization of "organised consumption."

Iban de Rementeria from the Chilean Harm Reduction Network states that one of the consequences of current drug policy is that it criminalises an excessive number of people.

"Eighty-five-thousand people are arrested under the drug law each year whereas only 17,000 are arrested for burglary, which is the crime the police gets most complaints about," de Rementeria told The Santiago Times. "Clearly, resources could be put to a better use."

Although Chile's mainstream politicians are adopting more conservative stances on the topic of drug policy reform, citizens and civil society organisations are leading the debate to bring about change.

For Eduardo Vergara, director of think tank Asuntos del Sur, the drug debate is still taboo in Chile and public figures shy away from it for fear of damaging their reputation. Last year, conservative politicians called for the revival of a constitutional reform bill that would punish politicians for illegal drug use. The bill, first approved in the Senate in September 2004, would bar politicians from holding public office if they use illegal drugs.

However, Vergara argues that Chile is also the ideal country to provide leadership in Latin America on the issue.

"Chile, because it is not contaminated by the thousands of deaths and massacres associated with the war on drugs, and because it presents more stable levels of democracy and economy, has the opportunity to lead the debate and show the example," Vergara told The Santiago Times.

Vergara believes the situation is changing at a fast pace now, and said a few years ago this debate was not on electoral agendas at all. Today, former and incumbent presidents across Latin America are pushing for reform in a wave that will be, according to Vergara, "unstoppable."

"Something unprecedented is happening," Vergara B. said, "Politicians, congressmen, students, academics and so on, have realized the extremely negative effects drug laws have in Chile."

"There's plenty of evidence worldwide," Vergara added. "The harmful effects of marijuana are much less serious compared to other legal drugs such as tobacco and alcohol."

Although the issue is being touched upon by a growing number of politicians, most of the candidates for this year's presidential election have been given a "yellow leaf." The symbol means they have either agreed with some, but not all of the five points. A "red leaf" is assigned if the candidate has declared themselves against decriminalization of cannabis.

Pablo Longueira, AndrÃ©s Allamand, Claudio Orrego Larrain and Michelle Bachelet have all scored red leaves for their conservative positions on the issue.

Bachelet said in May 2013 she would consider revising the current drug policy as well as the classification of marijuana as a hard drug, which has been in effect since she signed a decree while serving as president in 2008. 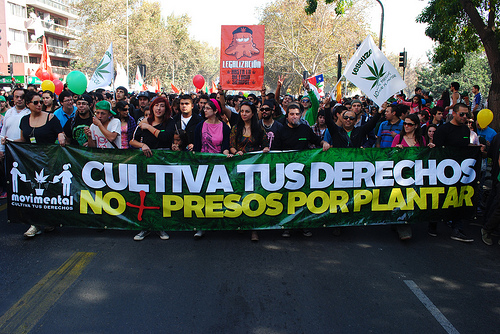