Chris Chappell, 33, is a shy, unassuming kind of guy. But once he's seated on the floor, script in front of his face and outstretched arms attached to homemade puppets, his personality comes alive.

Puppets Chris, Tex, Calvin and Steve speak in different voices to fit their characters — Steve, a news anchor, or Calvin, a fuzzy character to win over children.

His other puppets are green, and not quite as child-friendly. They debuted on YouTube to discuss other green things — like marijuana.

Puppets Bud and Nugget chat monthly about the latest in the world of weed and promote its legalization on "The Green Report."

"I wanted something that wasn't so in your face about marijuana, where people wouldn't be scared to watch it and learn a lot," Chappell said, with hand motions that emphasize a bracelet he constantly wears stamped with controversial green leaves.

Mostly, he wants to fight the stigma against the drug's use.

"I want to help bridge the gap between people who are still in that 'Reefer Madness' mindset and people who are already for legalization," he said, referring to a 1936 film used as a dramatic morality tale against marijana use.

He clarified that "The Green Report" is not to be confused as entertainment for children — it's an adult show.

"I'd like for (marijuana) to be legalized in general," he said. "The medical use is huge, there are so many uses for it."

"Kidz Newz" and a few commercials are his first attempts branching out from YouTube.

The payoff isn't much. Puppets can sell for around $250 a head. Although Chappell sews and glues together his own characters, he invested an average of $50 and more than a week of time to craft each of his nine puppets.

"It's hard to get the mouth right," he added.

His first puppet was Paul Gaston, a brown-haired, blue-eyed news anchor. He's got an Angry Birds puppet, and even "The Walking Dead" puppets.

In addition to weed, Chappell will film on other issues. His most popular video responded to a "Sesame Street" clip promoting vaccines.

Although he's just beginning, Chappell's vision for his puppeteering is expanding. He's filmed a few commercials and sells puppets on his website. Eventually, he'd like to start a production company.

But for now, he'll let Bud and Nugget champion his cause. 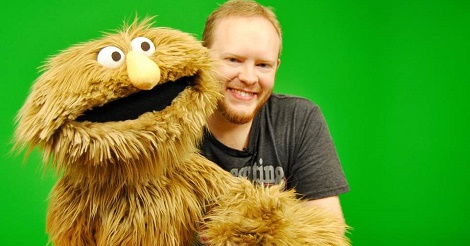 Mar 3, 2015
Jacob Redmond
J
C
Until Uncle Sam is on a ventilator, and the puppet master is dead.