ntil the state Supreme Court decides if cities are allowed to ban medical marijuana dispensaries through municipal codes, San Bernardino County and many Inland Empire cities are continuing to enforce their laws.

The state's highest court will decide whether they are legally allowed to do so or if they must allow the dispensaries to operate under the Compassionate Use Act of 1996, which gave patients the right to possess and cultivate marijuana for personal, medical use.

"We'll take whatever decision comes and deal with it at that time," said David Wert, spokesman for San Bernardino County.

The state Supreme Court heard oral arguments on Feb. 5 from attorneys representing the city of Riverside and a Riverside medical marijuana dispensary.

Riverside has attempted to shut down the dispensary because, like many cities, its zoning code prohibits dispensaries.

Dealing with dispensaries is normal for code enforcement officers, who respond to such code violations as medical marijuana dispensaries, businesses operating within the wrong zones or excess trash in yards, Wert said.

The court ruling is "not going to cause the county to undo a lot of the work it's done, but just change the way we're doing it or stop doing," Wert said. "In the meantime, we have to enforce the rules that are on the books."

When the court agreed to hear the Riverside case, it also took on a case involving the city of Upland and the now-closed dispensary G3 Holistic Inc.

Its ruling on the Riverside case will be binding on all other cases questioning the legality of bans through zoning.

Upland has at least four medical marijuana dispensaries, but City Manager Stephen Dunn said the city is not actively attempting to shut them down.

Dunn said police are investigating the dispensaries and will give information to the federal Drug Enforcement Administration.

"If the court rules in our favor, then that will give us more of a leg to stand on to go after them," Dunn said.

A proposed administrative citation ordinance is pending before the Upland City Council Advisory Committee, which would allow the city to issue daily fines to Municipal Code violators, including medical marijuana dispensaries.

Upland is one of the only cities in the region not issuing fines.

"As much as people want to make it seem like we're going to be heavy-handed, we're going to give everybody due process, but the medical marijuana industry - they don't care," Dunn said. "They've got tons of money, so why not let them help us pay for attorneys?"

It has taken action against other dispensaries violating its zoning ordinance.

Chino Hills does not have an ordinance dealing with medical marijuana dispensaries but maintains that they are not allowed to operate in the city because they violate federal law.

"Our city attorney takes the position that we have a code that says you cannot do anything that breaks state and federal laws," said Denise Cattern, a spokeswoman for Chino Hills.

"From our perspective, we believe that medical marijuana is illegal according to federal laws, so we never did adopt anything specific because we think it's already handled."

Redlands recently became aware of a dispensary operating within its limits. It has begun issuing daily fines for violating its ordinance banning dispensaries, according to city spokesman Carl Baker.

The dispensary is being issued a $1,000 fine daily and is expected to stay open until the Supreme Court issues its ruling, he said.

San Bernardino has closed numerous dispensaries operating in violation of its Municipal Code. The city, which still has 29 open dispensaries, is following the Supreme Court case closely.

"If the Supreme Court rules in favor of cities, we'll be going out and closing a number of those businesses for operating without licenses or conditional-use permits and seize equipment and marijuana as evidence," City Attorney James Penman said.

"I anticipate that will be happening fairly rapidly. We may send them a letter of decision of ban before and give them a few days to close, but we may not."

Rancho Cucamonga officials are continuing to move forward on enforcement actions against the four dispensaries operating in violation of the city's Municipal Code.

"We're going ahead with our investigation irrespective on waiting on that outcome," said Jeff Bloom, the city's deputy city manager.

Montclair adopted its ordinance banning medical marijuana dispensaries in 2007. Since that time, several have been shut down - including one last month, said Steve Lustro, the city's community development director.

"Our position is that our prohibition right now is legal, and we're going to enforce it," Lustro said.

Lustro said if the law changes, the city will have to comply.

"If that means we have to rescind the prohibition on dispensaries or we have some options available to where we can modify it - when that time comes, then we'll work with the city attorney to do that to bring our code into compliance with state law," he said. 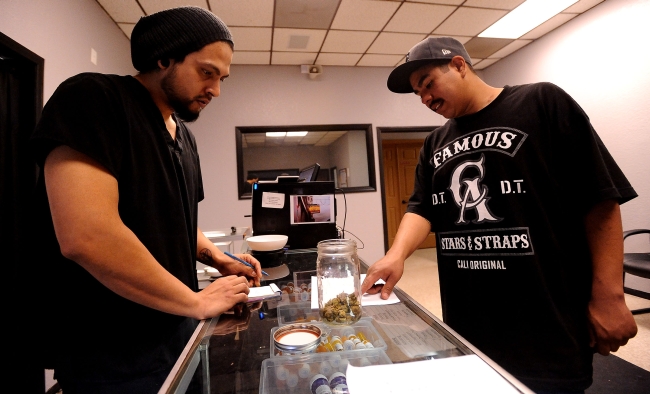