Colorado Springs City Council members will wait at least two weeks before deciding whether to put recreational marijuana sales on the April city ballot. At a work session Monday, council members discussed draft ballot language, possible taxation and regulation of recreational marijuana sales as well as a timeline for when they would vote on moving forward, or not going ahead, with a ballot measure.

Councilwoman Jan Martin, who introduced the agenda item on behalf of absent council member Jill Gaebler, said she wants to push the nine-person body to make a decision on the issue as soon as possible. "I would suggest that we find a way to come back with one resolution in two weeks and plan to take a vote, whether we want to move forward or not," Martin said. If the council moves too slowly, and eventually nixes putting recreational marijuana sales on the April ballot, citizens who want to put a measure on the ballot might not have time to collect enough signatures, she said. "I think we owe them at least that much respect," Martin said.

The city clerk told council members that more research is needed to determine the earliest date they can vote on putting a measure on the ballot. One consideration is if their vote would trigger a special election. Colorado voters approved Amendment 64 in November 2012, which allowed adults age 21 and older to have up to 1 ounce of marijuana and grow six marijuana plants on their property. The amendment passed in Colorado Springs, but in July 2013, the council voted 5-4 to ban sales in the city. This summer, the council decided against putting a measure on the November ballot. Recreational marijuana sales will come before the council again in an Aug. 25 work session. 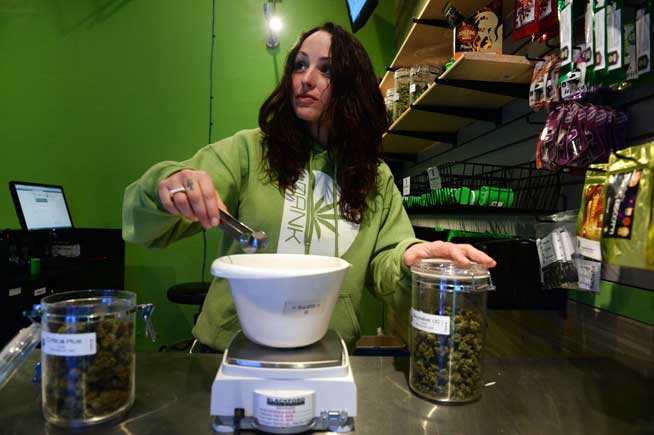 Nov 4, 2013
The General
T
T
Voters May Have Say In City's Marijuana Rules