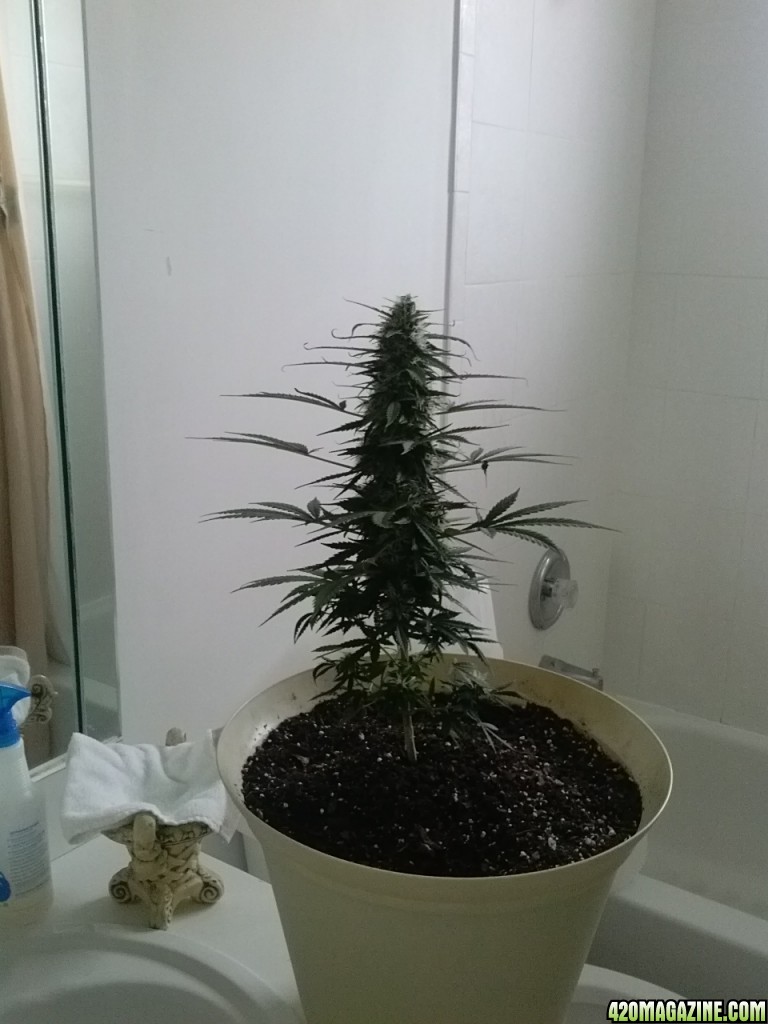 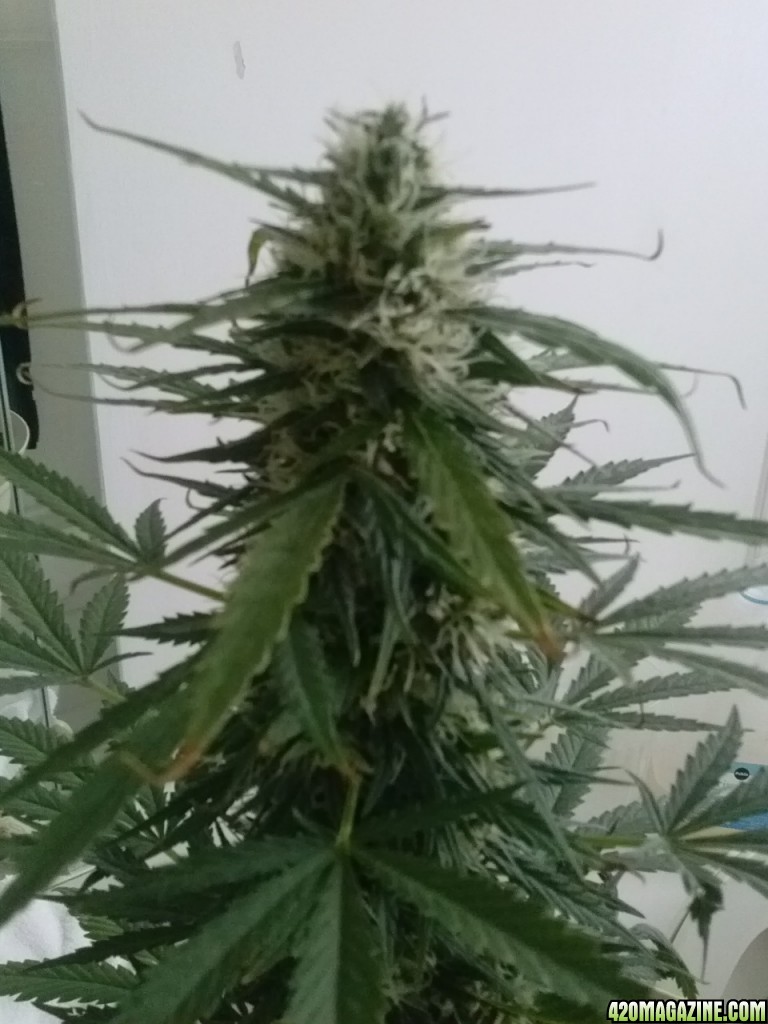 This is a female I got from seeds from my last grow. She's got a little nute burn, darn those Fox Farms charts, I got it wrong again. Never use anywhere near the recommended amounts, not even the watered down ones. This picture is from last week and in that time she's swelled up nicely. Her cola is much fatter today than this pic shows.

In my last grow I pollinated a Cotton Candy female with a White Widow X male. Got about 100 seeds and just wanted to try it out. I really love this Dr. Frankenstein stuff. Anyway, she's well into flowering and it's been almost 100 days since she germinated. She flowered early when I had her growing outside. She received about 12 hours of daylight each day with only about 6-8 hours of that in the direct sun. But since this was spring time each day was getting longer I thought she'd take a little longer to show pistils. Once I saw her sex I thought better bring her indoors to finish. She is showing the frosty buds that her mother had and the very close node spacing her father had. But I also attribute some of the close node spacing to being outside in the direct sunlight for her veg stage. I cannot be sure but I think there may also be some genetics involved. I got the seeds for her parents from Herbies so there may be some autoflowering in her line. Who knows?

Anyway, she does not have that many red or brownish pistils yet. But I've been watching the trichomes very closely with a 30x lens. I'd say there is maybe 10% darker pistils instead of the 75% I've been told to look for. But the trichomes are really started to frost up now. I don't see that many clear ones and the ones I get into good focus in that lens are definitely milky. Some of them only partially and others total milky. But at this stage there are absolutely no amber ones either. I have read that there should be at least some amber ones for the high I'm looking for.

Which brings me to my next question. As I read the articles the authors all seem to be using the same verbage. As if they are all copying the same text. The wording often goes something like this:

Well exactly what does "couchlock" mean. I take it to mean that once you smoke amber colored trichomes on your couch, you will not want to move, so you're "locked to your couch"? Unlike my younger days, I don't want to go out in public when I'm high. I prefer a good kick-ass stone that rushes the head intensely and let's me relax. Plus the relief of arthritic joint pain is something I'm really after as well, thus I don't want to leave my home, or my couch for that matter. I guess that would mean I want to wait a little longer until the trichomes start to turn amber. But at this point, there are so many milky ones present I'd hate to wait too long and let the amber trichomes deteriorate and thus end up with a weak thc content. I have spent close to 4 months with this one. But I'm interested in this topic to decide on when to harvest this baby for that intense high I'm looking for. Her mother was what I call "one puff stuff". That is one puff and you're stoned, very stoned. She looks to easily have 3/4 oz on her and I'm anxious to try her out. It will be a while before my next grow so I need to get this one right.

Get a 40x loupe or a handheld microscope (I hate those and use a loupe myself) and when you see the little amber speckled trichomes you'll have to use your judgement. Many times you'll see people write what their %'s are, but it's really just guesswork as there is no way to get an actual % without counting/checking every spot on every bud, leaf etc,. For what you're looking for, you want to make sure she is completely ripe. Going a few days past her "suggested" due date won't cost you too much in THC, and it's the amber you want for pain and that full-on stone.

If you just want advice, you'll need some decent pics under good light. The picture you've posted shows she is healthy, but it also shows she's not ready.

Amber Trichomes - Reality or a Myth
2

Do trichomes continue to develop to milky & amber after the cut?