History was made on January 1, 2014 when Colorado became not only the first state in the U.S. to legalize the sale of marijuana for recreational use, but the first to legitimize the over-the-counter sale of pot and bud-based products. Despite a thicket of rules and regulations, scores of businesses large and small have set up shop in Colorado, all vying for a share of marijuana's potential riches.

On Wednesday, February 26th at 10PM ET/PT, CNBC presents "Marijuana in America: Colorado Pot Rush," a one-hour documentary reported by NBC News Correspondent Harry Smith, which tells the controversial story behind this stunning development and reports on the exploding legal pot market, projected to grow as large as $10 billion nationwide by 2018. Colorado Governor John Hickenlooper sums up this groundbreaking law when he tells Smith, "This is going to be one of the great social experiments of the next century," and cautions other states to wait and see what unfolds there before voting on similar legislation.

The documentary follows several businesses racing to take advantage of the exploding statewide market for legalized marijuana, which according to projections could soon exceed $1 billion. Smith explores a decidedly unique industry, "pot tourism," and rides along with out-of-state residents who indulge in a state-sanctioned high between visits to pot grows and dispensaries. CNBC travels to Las Vegas for an investor conference where more than 100 venture capitalists are looking to capitalize on pot-related prospects. Smith profiles an executive of Open Vape, a company that seeks to become "the Google of cannabis" with a vapor pen system that enables the discreet use of pot. Smith also takes viewers inside the kitchen of an edibles company that's cranking out 40,000 marijuana-infused candy bars a month and struggling to meet demand.

CNBC profiles two shop owners who take Smith through the highs and lows of the legal marijuana trade. Thanks to Colorado's new law, one owner tells him, "It feels like I woke up with a winning lottery ticket." Retail pot is thriving, though the business is heavily regulated by the state with plants bar-coded and tracked, constant camera surveillance and a hefty tax on every sale. The U.S. Department of Justice has said it will not interfere with Colorado's legal pot business, but still considers the sale of marijuana in violation of federal law. That has created additional problems for dispensaries as banks are reluctant to do business with them. Governor Hickenlooper tells Smith it is, "a recipe for disaster," in terms of safety and potential criminal activity.

While a majority of people in Colorado and across America now favor legalizing pot, the consequences of doing so on a large scale are still unknown. CNBC heads to Greeley, a conservative town about 60 miles outside of Denver, where leaders are opposed to the new law, leery of marijuana's newfound acceptance, and reluctant to embrace the tax revenues it might bring. But just a few blocks away, the small town of Garden City is cashing in on the green with four pot dispensaries in a stretch barely a mile long.

Colorado's grand experiment was voted in by more than a million people, but there's one in particular who might be thanked–or blamed–for making the sale of pot legal. CNBC tells the story of Mason Tvert, a clever policy advocate who designed billboards and media stunts intended to convince skeptics that marijuana is no worse than alcohol. One of those opposed to that effort was John Hickenlooper, who as governor must now make the new law work. He expresses concerns to Smith about the effect that pot's increased availability could have on the state in general, and the message that legalization might sends to kids. CNBC speaks to a scientist and drug policy expert who raises troubling concerns about the threat of rising youth addiction rates. Smith also interviews an illegal pot dealer and asks whether legalization has threatened his black-market livelihood. His answer? "Definitely hasn't."

For more information and special web exclusives log onto: Marijuana.cnbc.com. 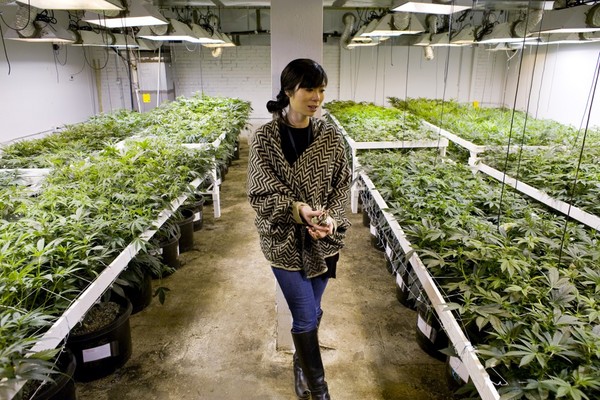 Very interesting and will have a front row seat on the couch...great post OP.